Home » Water Portfolio to be finalized ‘in coming weeks’
WEST

Water Portfolio to be finalized ‘in coming weeks’

During a meeting of the State Board of Food and Agriculture on Tuesday, Natural Resources Secretary Wade Crowfoot said the administration is continuing to advance the Water Resilience Portfolio and plans to complete the policy document soon.

“It's important for us to finalize the portfolio so we can really drive forward on a number of its core priorities,” said Crowfoot.

The plan has stalled since the COVID-19 pandemic took hold of California. In January, the administration released a draft of the portfolio, which detailed more than 100 policy actions. The following week, Gov. Gavin Newsom issued his budget proposal for the coming year, complete with an ambitious “climate budget” for funding many of the portfolio actions. Then in February, the administration unveiled a draft framework for voluntary agreements over Delta flow operations.

The outbreak, however, led the administration to pull nearly every new proposal in the budget. Newsom also launched a lawsuit over the federal biological opinions, putting a sudden halt to negotiations over voluntary agreements.

In the meeting, Crowfoot acknowledged the budget shortfall would hurt water priorities like helping local communities adapt to the Sustainable Groundwater Management Act.

“We are doubling down on supporting local communities,” he said. “Specifically, (CDFA Secretary Karen Ross) and I have established an interagency working group, or task force, that is focused on taking measurable action to improve SGMA implementation.”

He said the actions will include making water transfers easier, removing barriers for groundwater recharge and providing local governments with tools for land use planning for fallowed lands. Crowfoot also framed protections for fish as benefiting farmers and ranchers.

“When fish are on the verge of extinction, it creates challenges to water reliability for farmers and ranchers,” he said.

Crowfoot acknowledged the administration’s “need to protect endangered species” has complicated the voluntary agreements and efforts to move toward “a paradigm of collaboration” and away from litigation. He said the goal of the administration is to settle the multiple lawsuits over both the biological opinions and the state’s new operating plan for the State Water Project “as quickly as possible.”

“We actually think that conditions are right to explore whether we can settle out these issues,” he said. “I know it's been discouraging for many in the agricultural community to witness all of this litigation and, in some cases, name calling from certain stakeholders.”

Board President Don Cameron reminded Crowfoot that time is critical when it comes to water right now. 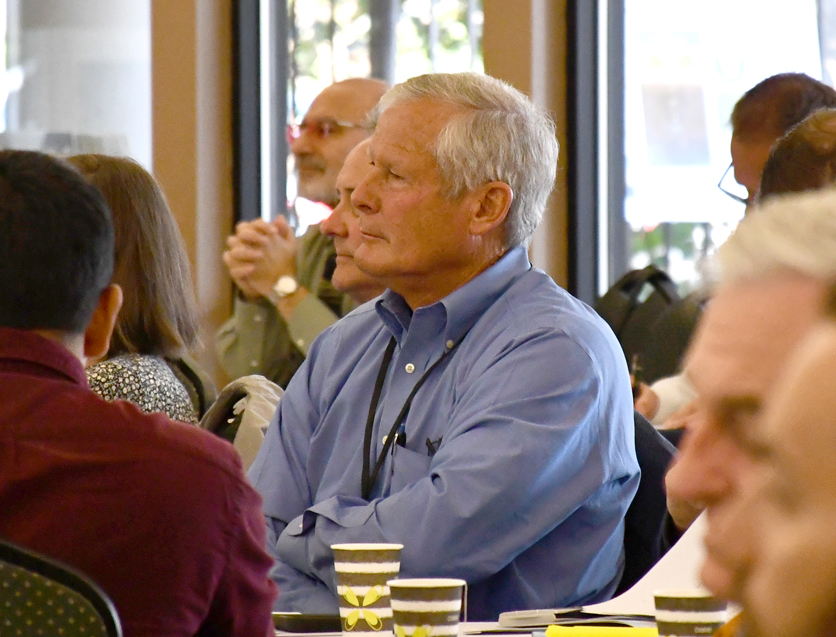 Don Cameron, president of the State Board of Food and Agriculture

“We do hope that that the 'near term' is near term, when you talk about reaching that agreement,” said Cameron.

Crowfoot said he is optimistic, seeing potential in the strong working relationships between the state and federal agencies on pumping operations. He said settling the legal dispute would create momentum for turning the February framework on voluntary agreements into a legally enforceable agreement.

“I've never seen as much litigation from everybody as is currently happening,” said board member Don Bransford.

He urged the administration to prioritize the voluntary agreements in order for California agriculture to continue supplying food to the nation during the pandemic. Earlier in his presentation, Crowfoot pointed out how the snowpack this spring has been significantly lower than average.

Bransford also raised concerns over the portfolio being too broad, which Crowfoot acknowledged has been a challenge.

“Failure would be if we got incremental improvements on 60 different priorities that actually don't get anything done,” said Crowfoot, adding that the agencies are currently trimming that list down to a few top priorities.

This addresses another hurdle with the portfolio as well: the disconnect between agencies, he said.

Crowfoot reminded the board that the administration is pursuing the portfolio approach as a complement to the voluntary agreements and that settlement will not be “a silver bullet.” Agriculture will continue to face challenges with SGMA and with aging and crippled infrastructure even after agreements are signed. But he assured the board the administration is aware of this, with Ross reminding them in every meeting.

“Agriculture has stepped up in such a big way during the pandemic,” said Crowfoot. “Everybody up to the governor understands just how essential agriculture is to the future of our state.”

During a session later in the meeting, board members debated the language of a letter it planned to send to the administration, encouraging Newsom to settle the lawsuits and return to the negotiating table.

Ross chimed in with a point about the voluntary agreements continuing behind closed doors. She advised the board to include a statement on that in the letter, such as this: “There is a deep concern within the agricultural community in the state that they're not seeing enough visibility of that kind of work.”