U.S. Trade Representative Robert Lighthizer will be the star witness at back-to-back hearings today, first with the House Ways and Means Committee and then in the afternoon with the Senate Finance Committee.

Lighthizer’s likely to be grilled about the state of trade relations with China as well as ongoing negotiations with the United Kingdom and Kenya.

The World Trade Organization also is likely to be a major issue, says Senate Finance Chairman Chuck Grassley, R-Iowa. Grassley told reporters he expects Lighthizer to argue that the WTO should be turned into more of an arbitration body rather than allowed to sit in judgment of dispute.

But Grassley wrote in an op-ed for Bloomberg News that “the real threat to the WTO is not the scope of its mandate, but its increasing inability to fulfill it.” He said there is still a need for the WTO’s dispute settlement function: “Truly effective dispute settlement would improve our ability to confront China with our allies.”

Take note: Ahead of today’s hearings, more than 190 farm groups and agribusinesses sent a 13-page letter to the White House appealing to President Donald Trump to give China time to fulfill its pledges under the “phase one” trade agreement. Farm groups have been concerned that Trump’s saber-rattling with China could undermine U.S. ag exports.

Also on tap today: The Senate is expected to approve the Great American Outdoors Act, which would permanently fund the Land and Water Conservation Fund at $900 million annually. The bill will still need final approval from the House. The Dietary Guidelines Advisory Committee also is scheduled to release its draft report.

Grassley accused the British of using food safety concerns to disguise protectionism and said he doubts a deal is possible this year. “I’m not so hopeful, but I’d be very thankful if it got done that quick,” Grassley said.

EPA is defending its decision to allow continued use of dicamba on soybeans and cotton, telling the Ninth U.S. Circuit Court of Appeals that it is in compliance with FIFRA, the federal pesticide law.

In a response to a plaintiffs' motion to enforce the court's order vacating registrations of Bayer's Xtendimax,  BASF's Engenia and Corteva's FeXapan, EPA said rescinding a registration “only makes it illegal to distribute or sell that pesticide. It does not outlaw use of products already legally purchased.” 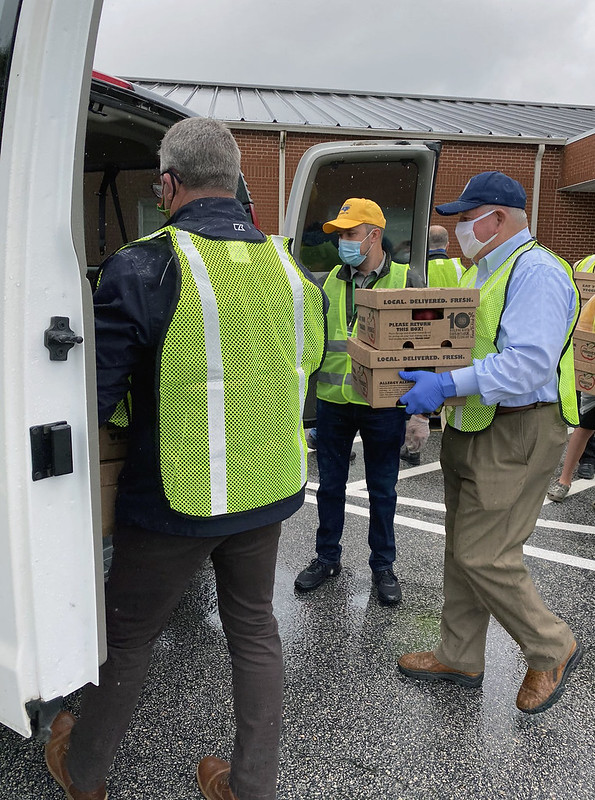 USDA is ramping up for the next round of Food Box deliveries, which are supposed to start in July, but the department is still well short of meeting its goal for the first round. As of Tuesday, USDA has delivered 15.6 million boxes. The goal is to deliver 40 million by June 30.

Industry representatives say companies with first-round contracts have been notified whether they will be allowed to continue. Mollie Van Lieu of the United Fresh Produce Association also says bidders who didn’t get contracts in the first round because of technicalities may be awarded contracts to distribute boxes in underserved regions.

Van Lieu, speaking on a webinar as part of this week’s United Fresh Live! conference, thinks the contracting process could be smoother the second time around.

Ahead of the first round, bidders were sometimes competing to serve the same food banks and non-profits. “We’ll have a better understanding of who is being served by whom, and we can fill in the gaps better,” she said.

By the way: A bill introduced by Sen. Kelly Loeffler, R-Ga., would create a position of agricultural supply chain administrator at USDA. The position would act as a liaison between food banks, schools, grocers, restaurants, and non-profit organizations.

The new office would help farmers that have excess commodities find new distribution networks. The office would include personnel to deal with regulatory and marketing issues.

A new analysis by Rabobank says the coronavirus pandemic has “rejuvenated the dairy category” as consumers globally turn back to a “trusted, nutritious product.” China is emphasizing a government recommendation to increase dairy intake, the report notes.

Moreover, the market disruptions caused by the shutdown in food service also are easing, but Rabobank economists say excess supplies will continue for some time. During the lockdowns, processors diverted milk that would have gone to foodservice into products like butter, cheese and powder. “These inventories will remain elevated and will weigh on markets.”

Take note: The analysis expects retail sales to return more to normal but says the lockdown may have been long enough to change some habits: “Some segments of consumers may continue preparing more food at home on an ongoing basis.”

Battleground states at odds over ethanol

Ethanol could be a significant issue in Iowa this fall in both the presidential and Senate races. Grassley is demanding EPA publicly refuse to consider any requests by oil refiners for exemptions from compliance with the Renewable Fuel Standard.

“If the EPA ends up accepting these petitions, not only will they lose again in court, they will also risk President Trump’s support in Iowa,” Grassley told reporters.

According to a Des Moines Register/Mediacom Iowa Poll Monday, Trump leads Joe Biden by just one percentage point. The poll has Sen. Joni Ernst down by three points to her Democratic challenger, Theresa Greenfield.

Meanwhile: Pennsylvania Gov. Tom Wolf, a Democrat, is calling on EPA to provide exemptions to small oil refiners for at least “some portion” of their biofuel usage requirements. “These refineries face RFS compliance costs that exceed their payroll costs, and, as a result, refiners have laid off employees, reduced benefits, and delayed capital projects,” Wolf said in a recent statement.

By the way: Members of the Congressional Biofuels Caucus will hold a virtual town hall today on the challenges and opportunities facing the ethanol industry. Participants will include House Agriculture Chairman Collin Peterson, D-Minn. and representatives of ethanol and grain groups.

Be sure and read this week’s Agri-Pulse newsletter for stories on key farm-state Senate races, ethanol prospects in Mexico as well as other issues.

He said it. “A revitalized WTO can play an effective role in the global economic recovery and advance the cause of free and fair global trade.” – Senate Finance Committee Chairman Chuck Grassley, R-Iowa, in his Bloomberg op-ed.