The Republican race to succeed Kansas senator Pat Roberts is nearing the finish line, and the state's farm groups are trying to ensure that the winner has what they consider a strong record on farm policy.

Roberts, a legendary name in U.S. farm policy who has served as chairman of both the House and Senate Agriculture committees during his 39-year congressional career, announced his retirement last year. The state's primary is Aug. 4.

There are 11 candidates on the GOP primary ballot, but the race has largely focused on two — two-term Rep. Roger Marshall and former Kansas Secretary of State Kris Kobach, an immigration hard-liner who has taken populist stands that could put him at odds with some in his state's large cattle industry.

The Democratic primary race is between Barbara Bollier, a Mission Hills physician, and businessman Robert Tillman of Wichita. Bollier is running on the Democratic ticket after leaving the Republican party in 2018. She told the Topeka Capital-Journal she switched parties because of the GOP leadership’s “hard-line rhetoric.”

A political science professor at Kansas State University, Nathaniel Birkhead, told Agri-Pulse the big question in the GOP race is whether Kobach can expand his base and whether Marshall can increase his name recognition in Wichita and Johnson County, in the Kansas City suburbs.

Kobach is best known nationally for his positions on immigration policy and the assistance he has lent to other states in writing laws that restrict immigration. He served as Kansas secretary of state from 2011 to 2019 but ran unsuccessfully for governor in 2018, drawing smaller margins than other GOP statewide candidates, Birkhead said.

Meanwhile, Marshall has amassed critical support from groups such as the Kansas Farm Bureau and Kansas Livestock Association.

Kansas Farm Bureau President Rich Felts said Marshall has shown that he understands agriculture. “He served on the (House) Ag committee, he’s done us well as we’ve worked on the farm bill, trade issues (and) worked us through this COVID thing,” Felts told Agri-Pulse.

Kobach has not been as friendly to agriculture because his focus is more on immigration, according to Felts. “He has really been very engaged on immigration to the point we see that as regressive as we come to our labor source in agriculture,” Felts said.

GOP Congressman Tim Huelskamp lost his reelection bid in 2016 after the Kansas Farm Bureau endorsed Marshall. Farm groups became frustrated with Huelskamp, a conservative firebrand like Kobach, after the House GOP leadership stripped Huelskamp of his seat on the House Agriculture Committee in 2012.

Kobach, who lives on a small farm and grows soybeans, argues that he does have strong ties to agriculture. At a GOP debate in May, he said one of his priorities as senator would be creating incentives for people to move from urban to rural areas.

“I believe there should be federal income tax credits for people who leave urban areas and move to the country, or graduates who, after going to college decide, ‘Yes, I’m going to settle in rural areas,’” he said. 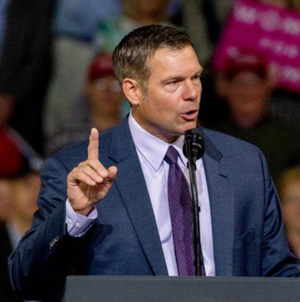 “I think senators should ask for seats on committees where they add value,” he said. That said, Kobach thinks there were times where the Ag committee got it wrong. He said one of those was with the World Trade Organization's ruling against the mandatory U.S. country-of-origin labeling requirements for beef and pork. Kobach said the Ag Committee should have resisted the WTO ruling.

“I wouldn’t surrender, I would try to persuade my committee members that we have to fight back. We don’t answer to the WTO, we answer to Kansas farmers and American farmers,” he said.

Kobach also said he would support Trump imposing additional tariffs on China to enforce the "phase one" trade deal.

He also would support livestock marketing reforms being pushed by Sen. Chuck Grassley, R-Iowa, and Jon Tester, D-Mont. Their bill would require meat packers to buy at least 50% of their livestock on the open or spot market. Kobach also supports the PRIME Act, which was re-introduced by Rep. Thomas Massie, R-Ky., and Rep. Chellie Pingree, D-Maine, to allow custom-exempt meat processors to sell their products across state lines.

Kobach accused Marshall of lobbying to switch from the House Ag Committee to Ways and Means, which is considered a more powerful panel because of its responsibility for tax and trade policy; Marshall says he would have tried to stay on the ag committee at the same time.

On immigration, Kobach’s campaign website says he has spent two decades fighting against illegal immigration. If elected, Kobach said he would support President Trump's efforts to finish a wall along the southern border.

But Kobach's stances have not won over the support of the state's livestock groups. The Kansas Livestock Association was the latest state ag organization to endorse Marshall. Explaining the July 1 announcement, KLA President Harry Moser said there is a large need in the beef and dairy industry to have a system for guest workers to work at feedlots and processing plants.

“In the recent past, our members have tried to use the Kansas Department of Labor programs to hire out of high unemployment areas to fill these jobs and have little to no success in doing that,” Moser told Agri-Pulse. 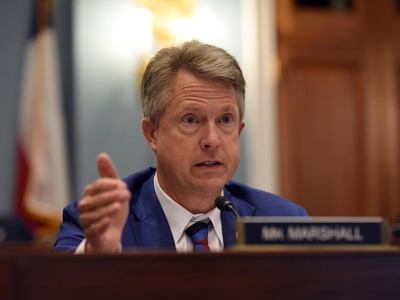 Jesse McCurry, executive director of Kansas Grain Sorghum, told Agri-Pulse the organization does not usually endorse candidates for the Senate but said the next one should have a “tremendous commitment and track record” on agriculture.

McCurry said there are big shoes to fill when Roberts, who has had a key role in the last several farm bills, leaves office.

Roberts told Agri-Pulse he does not plan on getting involved in the GOP race.

“I think the Democrat opponents are going to be very well funded. Simply because you are Republican and win the primary, it is not a gimme,” Roberts warned.