Montana GOP Sen. Steve Daines is struggling to lock up a second term in a race that could shift the policy focus of a major farm-state seat and help determine control of the Senate.

Daines (pictured above) is running neck and neck in recent polls with the state’s popular governor, Steve Bullock, who entered the race in March after ending a brief run for the Democratic presidential nomination.

Bullock has been a strong critic of President Donald Trump’s trade war with China, citing its impact on U.S. farmers, and calls climate change “one of the defining issues of our time."

“We need to address climate change in a way that empowers and invests in farmers to be part of the solution — not blames them for the problem,” Bullock wrote in response to questions from Agri-Pulse.

“We can start by funding research into how our producers can adapt to our changing climate, increase crop yields, and protect their bottom line. We also need the USDA to stop burying their own research on climate change and how it affects our producers.”

Agriculture is the largest industry in Montana, which ranks 6th nationally in beef cattle production and 3rd in wheat production, but outdoors and environmental issues are also important to the state’s voters as well.

And Daines, who gets good marks from the Montana Farm Bureau and Montana Grain Growers Association, has edged to the center on some environmental issues over the past year while also trying to retain his conservative base.

Despite opposition from cattle and sheep producers, Daines recently helped lead an effort in the Senate to pass the Great American Outdoors Act, which would permanently fund the Land and Water Conservation Fund, which helps pay for acquisition of new public lands. The livestock groups say the permanent funding would give the federal agencies free rein to acquire private lands.

Both Daines and Bullock believe Congress should reimpose country-of-origin labeling requirements for beef and pork, a major issue for many independent cattle producers on the northern Plains.

Montana is a reliably Republican state in presidential races — Trump carried the state by 20 points in 2016 — but the state’s two Senate seats have swung between the two parties.

“We're a pretty conservative state,” John Youngberg, executive vice president for the Montana Farm Bureau Federation, told Agri-Pulse. “We've had a conservative Senate and House here in Montana for a number of years. But having said that, we tend to wander astray at the top of the ticket.”

The stakes in the race go beyond Montana: Republicans control the Senate by three seats, 53-47, and Daines is one of more than half a dozen vulnerable GOP incumbents.

The Cook Political Report rates the Montana race as a toss-up, while Inside Elections and Larry Sabato’s Crystal Ball both rate it as leaning Republican, indicating that they consider Daines a small favorite. 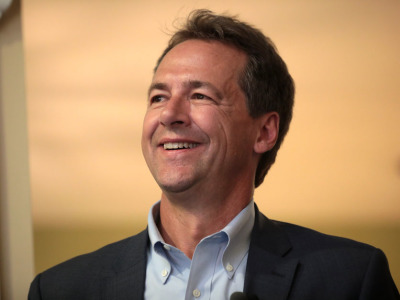 Bullock had raised over $10 million for the race by July 18. According to the Center for Responsive Politics. Daines had raised nearly $12 million.

Daines has drawn the support of President Donald Trump, who tweeted on June 5: “No Contest. Steve blows him away. So important for Montana. I’ll be there to help Steve win big!!!” It’s still unclear when Trump plans to visit Montana to campaign for Daines, who votes with Trump's position 86% of the time. By comparison, Sen. Jon Tester, the state’s Democratic senator, is in line with Trump on just 31% of votes, according to an analysis by FiveThirtyEight.

As his reelection race neared, Daines improved his voting score with the League of Conservation Voters by his support for the LWCF and votes on such issues as protecting the ability of a president to protect lands under the Antiquities Act. LCV gave Daines a score of 29% in 2019, up from 14% in 2018 and zero in 2017.

Daines' campaign and Capitol Hill offices did not respond to Agri-Pulse inquiries.

The Bozeman Daily Chronicle reported in 2019 that Daines does believe in climate change, but that “to suggest that it’s human-caused is not a sound scientific conclusion." He also has been critical of proposals like the Green New Deal or a carbon tax to address it. In 2012, he signed the No Climate Tax Pledge.

Daines angered some Montana Republicans on an important state issue by co-sponsoring the Confederated Salish-Kootenai Tribes water compact, an effort to solve conflicts over the 1855 Hellgate Treaty that gives the tribes claim to in-stream water rights outside of the Flathead Indian Reservation. The compact also would give the tribes rights to specific waterways on and off the reservation and pays $1.9 billion for settlements and to fund the Flathead Indian Irrigation Project.

The Montana Farm Bureau and the Montana Farmers Union both support the compact, but some Republican leaders say it threatens property and water rights.

“There’s some loud naysayers on the Republican side that are not happy with him for that,” the Farm Bureau’s Youngberg told Agri-Pulse. “That's going to play, particularly in the Republican camps, on how folks are going to perceive Senator Daines.”

Daines risks angering a different set of voters when it comes to Trump’s nomination of William Perry Pendley, who has been a past advocate for federal government to sell public lands in the West, as director of the Bureau of Land Management. Environmental groups strongly oppose the nomination, and on Monday, Bullock filed a lawsuit intended to block Pendley from serving as director until the agency until the Senate confirms his nomination.

A poll conducted by the Center for Western Priorities in June found 87% of Montana voters said that public lands, parks and wildlife issues were either very important or somewhat important to them in deciding their candidate. The poll also showed most Montana respondents view climate change as an important issue for a candidate to speak about. They were asked to rate messages by candidates from a scale of 0 to 10 with 10 being highest. The message about climate change earned a 7.1.

Daines has not publicly spoken about Pendley’s nomination, but he is a member of the Energy and Natural Resources Committee, which will vote on the nomination.

Bullock previously worked as a consumer protection, small business, and labor lawyer, before being elected Attorney General in 2008. He has since been elected governor twice and has gained some praise for his handling of COVID-19 in Montana.

“If you compare our state with our neighboring states, he drastically flattened the curve on coronavirus, basically crushed it,” Walter Schweitzer, the president of the Montana Farmers Union, told Agri-Pulse.

Bullock told Agri-Pulse that he supports mandatory country-of-origin labeling for beef and pork products, expansion of rural broadband, opening up new avenues for local beef processors, the CSKT Water Compact and actions that “enforce and strengthen state and federal antitrust laws in the agriculture sector.”

Representatives from both the Montana Farm Bureau and the Montana Grain Growers Association said that, while they will not endorse either candidate at the present time, Daines has been very engaged with them working on issues like trade, the 2018 farm bill and disaster relief.

“We have one Democratic senator and one Republican senator,” Lola Raska, the executive vice president for the Montana Grain Growers Association, told Agri-Pulse. “They're both very engaged on agriculture, so it really has worked to our benefit.”

The Montana Farmers Union’s Schweitzer said that some producers in the state are frustrated by Trump’s trade wars and didn’t feel properly represented by Daines in trade agreements.

“We have three major agreements and in those agreements, nothing was favorable for the Montana family farms,” Schweitzer said. “And yet there were things that were put in there for technology. … Does it help me as a family farm?”

Youngberg said that while agriculture is the largest industry in the state, he has started to see more of the population migrate into urban areas and more redistricting happening around those areas. But Youngberg still believes that this year’s election will be come down to the wire.

“I think it's going to be extremely close,” Youngberg said. “We've had some close races before that have been decided by a pretty small percentage of the vote. Any given year, you could have somebody that does a landslide victory that you don't understand, and the next year they could lose and you don't understand that either.”