Daybreak Sept. 15: Shipping shuts down ahead of Sally

Shipping shuts down ahead of Sally

The Gulf Coast, and the critical agricultural ports of Louisiana, are bracing for a blast from Hurricane Sally.

In contrast to Hurricane Laura, Sally “is much more on a trajectory to impact the Mississippi Gulf region, which is very consequential to soybean and grain exports,” says Mike Steenhoek, executive director of the Soy Transportation Coalition.

As of Monday evening, no northbound or southbound ship movement was being allowed along the entire lower Mississippi River. Roughly 60% of U.S. corn and soybean exports move through that region.

The top Democrat on the Senate Agriculture Committee, Debbie Stabenow, says she’s concerned about USDA’s ability to fund a new round of coronavirus relief payments along with making regularly scheduled farm bill program payments in October.

But at the same time, Stabenow suggested she isn’t ready to sign off on more money for USDA’s Commodity Credit Corp. account without some say in how the money is spent. USDA has used CCC to fund the Coronavirus Food Assistance Program as well as the Market Facilitation Program before that. Ag Secretary Sonny Perdue has said he has plenty of money left to make the CFAP-2 payments.

Stabenow told reporters she doesn’t want to “provide another blank check to USDA when we know that what they’ve done already is not fair.”

Take note: Stabenow on Monday released an analysis by the Government Accountability Office of payments under the 2019 version of  MFP. She thinks the payments were unfairly skewed to large operations and farms in the South. Read our report here.

“This should serve as the final nail in the coffin of these gap-year petitions, and we are eager to put this dark and sordid chapter in the history of the RFS behind us once and for all,” said RFA President and CEO Geoff Cooper.

Since March 2020, 17 refineries have submitted 68 requests asking EPA to reconsider denials or grant exemptions for prior years.

By the way: The refiner-backed Fueling American Jobs Coalition says EPA is turning a blind eye to refineries and their workers in key battleground states like Pennsylvania, Ohio and Texas. Payment options for refiners won’t help, the group says.

Meatpacking giants Smithfield and JBS both plan to challenge proposed fines from the Occupational Safety and Health Administration for COVID-related violations.

In the latest case, OSHA cited JBS “for failing to provide a workplace free from recognized hazards that can cause death or serious harm.” The proposed fine is $15,615, the maximum allowed by law.

Reaction: The companies say the citations are unfair because they were for conditions in place a month before OSHA and the Centers for Disease Control and Prevention issued specific guidance for the meatpacking sector. Both also said they had instituted numerous measures to address workplace safety.

The United Food and Commercial Workers Union called the proposed JBS fine “insufficient given that the outbreak led to eight worker deaths and over 200 worker infections.”

The Army Corps of Engineers wants to make it easier for a wide variety of industries, including agriculture, to use nationwide Clean Water Act permits. The permits allow certain activities that only minimally affect the environment in waterways and wetlands under federal jurisdiction.

The Corps is proposing to eliminate a 300 linear foot limit on losses of stream bed for a number of its permits, including Nationwide Permit 40, which authorizes agricultural activities. There would be a new half-acre limit, under a proposed rule.

Why it matters: Activities authorized under NWP 40 include construction of building pads for farm buildings; the installation, placement, or construction of drainage tiles, ditches, or levees; mechanized land clearing; land leveling; and the relocation of some drainage ditches.

Don Parrish, senior regulatory director at the American Farm Bureau Federation, said the group would be studying the proposal to “ensure the permits line up correctly with the details” of the administration’s new Navigable Waters Protection Rule, which re-defines what wetlands and waterways fall under federal jurisdiction.

The view from critics: Some former EPA water officials say the rule would “significantly increase the amount of fill material that can be discharged into streams and wetlands with little oversight by the Corps.” 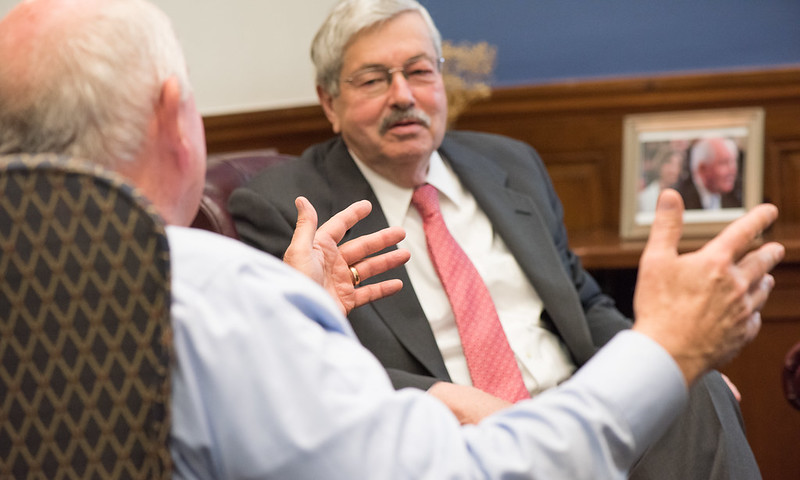 Branstad’s influence in China will be missed

Lawmakers and Trump administration officials say Terry Branstad’s presence in Beijing will be missed as he leaves his post as U.S. ambassador to China and returns to Iowa.

“Over the past few years, amid rising tensions and trade conflicts, it’s been reassuring to have an advocate for American agriculture bring his experience and expertise to the table and represent America’s interests with the world’s second largest economy,” Iowa GOP Sen. Chuck Grassley said of the former Iowa governor.

Branstad, who administration officials say played a key role in the “phase one” trade deal, didn’t give a reason for his resignation. A source close to the ambassador said the decision was made months ago and isn’t health related.

The reaction to Germany’s first discovery of a case of African swine fever has been swift. China, which bought $867 million worth of German pork last year, is banning all pork from the country even though the virus has not been detected in the country’s commercial pork supply.

German authorities detected the virus in a wild boar near the country’s border with Poland.

Any German pork shipped to China before the ban went into place will have to be quarantined for 10 days, according to China’s General Administration of Customs. Officials in Berlin with USDA’s Foreign Agricultural Service say it’s likely the infected boar came from Poland, a country that has suffered numerous outbreak in boars and farmed swine.

She said it. “I would feel very uncomfortable (with) that being the case because that question could be raised.” - Sen. Debbie Stabenow, ranking Democrat on the Senate Ag Committee, when asked whether she thought Ag Secretary Sonny Perdue tried to steer Market Facilitation Program payments to his home state of Georgia.

Georgia had the highest payment rate for non-specialty crops at $119 per acre and highest payment per individual, $42,500, under the 2019 MFP. But the state’s $311 million in total MFP payments was far less than No. 1 Iowa, which received $1.6 billion, and many other states. Stabenow’s home state of Michigan received $261 million.