USDA has announced plans to kill its survey of farmworker wages, a move the United Farm Workers claims is aimed at cutting wages for H-2A workers. In a notice posted Wednesday, USDA says the fall survey conducted by the National Agricultural Statistics Service is no longer needed because of data that is available from other sources.

The Labor Department uses the NASS wage survey to set the annual state wage minimums, known as the Adverse Effect Wage Rate, or AEWR, for H-2A workers. This year, the rates went up 6% nationally, with farmers in some states seeing increases of up to 10%.

“Instead of providing genuine COVID-19 protections, paid sick leave and hazard pay to field workers, Trump now proposes cutting their wages in the middle of a pandemic that is afflicting them at alarming and increasing rates,” said UFW Foundation Executive Director Diana Tellefson Torres.

Take note: Representatives of the Labor Department, which sets the AEWR, had no immediate response about the USDA action.

Veronica Nigh, an economist with the American Farm Bureau Federation, called the USDA move “a step in the right direction to ensure the wage setting mechanism for H-2A workers does not encompass flawed data that disproportionately penalizes farmers who rely on guest workers.”

She said, “Nothing in this announcement states an intent to lower wages for domestic and foreign workers.”

A first-term Democrat on the House Ag Committee, Virginia’s Abigail Spanberger, tweeted her support Wednesday evening for a negotiated deal. “When we vote, we must vote on a bill that can pass the Senate, become law, and deliver relief to the Americans who need it. … Passing a partisan bill that won’t become law won’t help working families,” she said.

The House bill includes a number of agricultural provisions, including aid to hog and poultry growers and the dairy industry.

The Senate easily cleared a continuing resolution to keep the government funded until Dec. 11.

The bill, which passed 84-10, will replenish USDA’s Commodity Credit Corp. a $30 billion line of credit that USDA uses to make payments to farmers. The measure also bans CCC payments to oil refiners but exempts biofuel producers.

Another provision will give states another year to submit plans to USDA for managing hemp production; the CR extends the 2014 farm bill's hemp pilot program through September 2021.

The National Industrial Hemp Council and National Association of State Departments of Agriculture were pushing for the extension. 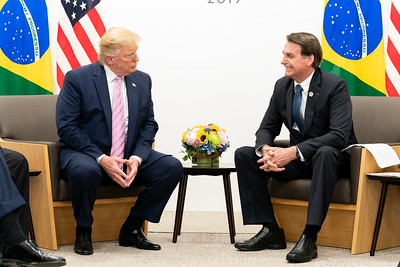 “My government is taking unprecedented actions to protect the Amazon,” said Bolsonaro, who equated Biden’s comments during Tuesday’s presidential debate to a bribery proposal.

Bribery and graft scandals have rocked Brazil in recent years, and foreigners who criticize Brazil’s treatment of the Amazon are a common target of scorn in the South American country.

“What some have not yet understood is that Brazil has changed,” Bolsonaro continued in a series of tweets. “Today, its President, unlike the left, no longer accepts bribes, criminal demarcations or unfounded threats. OUR SOVEREIGNTY IS NON-NEGOTIABLE.”

Bolsonaro, dubbed by some as the “Trump of the Tropics,” also reiterated his strong ties with President Trump. Biden suggested Brazil be punished economically if it doesn’t stop the deforestation, which is linked to climate change.

UK exports first beef in more than 20 years to US

When the U.S. banned beef from the United Kingdom in 1996, the British and Irish were suffering a major outbreak of bovine spongiform encephalopathy (also known as Mad Cow disease). But more than 20 years later, trade has resumed with the first shipment leaving for the U.S. from Northern Ireland on Wednesday, the U.K. announced.

Although the USDA gave the U.K. the green light to begin exporting beef again, the U.K. continues to sharply restrict U.S. beef, a result of European Union rules prohibiting meat from animals treated with growth hormones and ractopamine. American farmers and ranchers are counting on those restrictions to be torn down in a free trade agreement that’s currently under negotiation as the U.K. pulls itself out of the EU.

“Fifty meat processing plants process 98% of the meat in this country. That’s not good for farmers, not good ultimately for the food chain and its resilience, and ultimately for our food security,” Larew said at a hearing of the House Small Business Committee Wednesday.

He said its cost-prohibitive for smaller processors to meet federal inspections to ship to different states and urged Congress and USDA to develop ways to help them.

The COVID pandemic and the impacts of climate change are straining the ability of the nation’s emergency management system to handle disaster relief, witnesses told the House Science Committee Wednesday. They emphasized the need for the federal government to conduct more research on the best ways to prepare and respond.

“It should be of grave concern to us all, but to Congress specifically, that as we know our risk to extreme weather events and other forms of disasters is increasing, our ability to manage them is already struggling to keep up,” said Samantha Montano, an assistant professor in emergency management at the Massachusetts Maritime Academy.

Roxane Silver, a psychology professor at the University of California, Irvine, highlighted the potentially severe mental health impacts of exposure to “cascading traumas” such as COVID, the economic downturn and weather disasters such as this year's derecho, hurricanes and wildfires.

He said it. “You know the difference between a Baptist and Methodist don’t you chair lady? A Baptist doesn’t speak to you in the liquor store,” Tennessee Rep. Tim Burchett said to Chairwoman Nydia Velázquez during the House Small Business Committee hearing Wednesday.