Dr. Marc Schenker recognizes California is ahead of the rest of the country when it comes to heat illness prevention, but more can be done. Schenker runs the UC Davis Western Center for Agricultural Health and Safety. He spoke in a webinar this week.

Like soldiers and athletes, farmworkers experience the most cases for heat stress, yet are the least protected and often go without immediate treatment, he said. Many cases involve farmworkers new to the job and not yet acclimated to working in the heat.

Cal/OSHA requires breaks when it hits 95 degrees, but workers can be at increased risk at 90 degrees under heavy work, he said. Piece rate work also increases the metabolic workload and heat risk.

Schenker called it “sad” there's no national standard, but recognized the complexity. “It's not a simple approach,” he said, in urging more engineering, education and enforcement.

The Washington Supreme Court ruled Thursday that dairy workers have the right to overtime pay. The decision overturned a long-standing exemption for farmworkers under the state’s minimum wage law and is expected to apply to all farmworkers.

California dairy is “well on its way” to achieving climate neutrality, according to Michael Boccadoro, executive director of Dairy Cares. He offered opening remarks Thursday for the California Dairy Sustainability Summit, which continues today.

California dairies lead the nation both in milk production—with 20% of the nation’s share—and environmental performance, said Boccadoro. He cautioned that California cannot solve global warming alone, however, and many hurdles lie in the way.

“There are folks that want consumers to believe cows, livestock and methane are the leading culprit in climate change and the only answer is converting to a meat- and dairy-free diet,” he said. “We cannot simply eat our way out of climate change.” 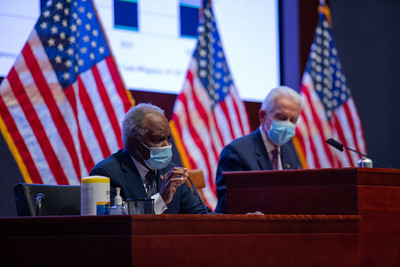 Democratic Reps. David Scott of Georgia and Jim Costa of California have made it official: They’re seeking the chairmanship of the House Agriculture Committee.

Scott has the most seniority on the committee. Costa is a dairy farmer from California’s Central Valley. Both are members of the moderate Blue Dog Coalition.

Rep. Marcia Fudge, D-Ohio, also is considered a leading candidate though she has not said anything publicly.

In a statement, Scott noted that he had worked on his grandparents’ farm as a boy and promised to address a wide array of concerns. "Each hearing, markup, and legislative action must take a step forward toward building a more equitable, dynamic, and resilient agriculture industry that lays forth a new path for future generations,” he said.

Costa used a letter to Democratic colleagues to appeal to more progressive members of the caucus: “I have a track record of working with traditional agriculture, while also pushing for more progressive policies to better position our food systems for the future. I believe the voice of the committee can be better leveraged for the greater good of our Caucus.”

By the way: The Associated Press on Wednesday declared that two Democratic members of the House Ag Committee had won close re-election races: Cheri Bustos in western Illinois and Angie Craig in Minnesota’s 2nd District. Bustos chairs the Democratic Congressional Campaign Committee, so a loss there would have been especially embarrassing for the party.

USDA economists say that the European Union’s Farm to Fork strategy for reducing agriculture’s environmental footprint could cut the EU’s ag production by as much as 12%. Gross farm income is projected to drop 16%, while EU food costs are estimated to rise by $153 per person a year, according to the study by USDA’s Economic Research Service.

The Farm to Fork plan, which is part of the EU’s broader European Green Deal, is an effort to increase agricultural sustainability by reducing farmers’ usage of pesticides, fertilizers and antibiotics.

Because of the potential cut in EU productivity, U.S. farmers could benefit from the EU plan so long as it remains limited to Europe: The study estimates that U.S. farmers will see an increase in gross farm income of more than 6%

EPA has concluded that most endangered species in the U.S. will probably be “adversely affected” by applications of atrazine. That finding was contained in a biological evaluation that was released Thursday along with evaluations of propazine and simazine.

There are 1,013 species that the agency says could be affected, including 439 plants. Others include aquatic invertebrates and fish. The evaluations are the first step in a process that involves consulting with federal wildlife agencies about what actions might have to be taken to avoid jeopardizing the species’ continued existence.

EPA says its interim registration decision in September for the chemicals provides measures to protect human health and “mitigate potential ecological risks while providing America’s farmers with valuable tools they have come to rely upon.”

Critics’ view: Nathan Donley, a senior scientist at the Center for Biological Diversity, which recently sued EPA over its approval of atrazine, said the evaluation "leaves no doubt that this hideously dangerous pesticide should be banned.”

Atrazine registrant Syngenta said it was still reviewing the documents.