The European Union’s proposed overhaul of agricultural production methods is not just bad for Europe — it threatens food security in the poorest of nations that look to the EU as role model for farming and a trading partner, according to an onslaught of criticism released Monday by Trump administration officials.

The EU’s Farm to Fork strategy, a part of its broader European Green Deal, is an effort to increase agricultural sustainability by decreasing producers’ access to farming technology like pesticides, fertilizers and antibiotics. But that plan, combined with Europe's general opposition to biotechnology, will only reduce the ability of European farmers — and by extension, African farmers — to increase production when and where it’s most needed, say USDA Secretary Sonny Perdue, Undersecretary for Trade Ted McKinney and Kip Tom, U.S. Representative to the United Nations Agencies for Food and Agriculture.

“These goals are important for all food systems,” Tom says about increasing sustainability, “But the U.S. and some other nations are already achieving these goals that the EU hopes to achieve, and we are obtaining them while increasing productivity.”

The EU would sacrifice productivity for sustainability, Perdue said at the Agri-Pulse Ag & Food Policy Summit on Monday.

“The American model of agriculture is the safest and most sustainable on earth,” Perdue said. “It’s the only way we’re going to feed a growing world population.”

Perdue accused Europeans of “fear-mongering” to convince African countries that U.S. food is not safe because of biotechnology and other technologies.

And Tom, who also spoke at the Agri-Pulse summit, said that’s hurting food production in some of the poorest and most malnourished countries in the world.

Farmers in some of the poorest countries in Africa often depend on exporting crops to the EU, so they automatically adopt European restrictions even though they can ill afford to do so, said Tom. Without technology to protect farmers from pests, weeds and other threats, countries like South Sudan become more dependent on food aid. 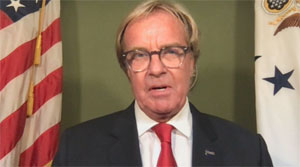 “It is indefensible scientifically and morally,” Tom said.

The EU defends its proposed policies as necessary to save the land for future generations and acknowledges it is advocating that other countries follow its lead.

“It is also clear that we cannot make a change unless we take the rest of the world with us,” the EU says in a statement. “The EU is the biggest importer and exporter of agri-food products. … The production of commodities can have negative environmental and social impacts in the countries where they are produced. Therefore, efforts to tighten sustainability requirements in the EU food system should be accompanied by policies that help raise standards globally, in order to avoid the externalization and export of unsustainable practices.”

USDA’s McKinney, also a guest speaker at the seminar, said he was not opposed to European farmers that want to reduce the usage of inputs, but stressed his opposition to policy that is imposed upon producers in Europe and elsewhere.

“You tend to want to implement (the restrictions) and then you force those bans on the rest of the world,” McKinney said of the EU.