California and Oregon reached an agreement Tuesday with a company owned by Berkshire Hathaway to remove four dams in the Klamath Basin.

The dams were blamed for destroying salmon habitat that Native American tribes in California depend on. Environmental and tribal groups have sought the removal for decades.

Gov. Gavin Newsom took personal affection to the cause: “I grew up with some of my greatest memories of going up to this river,” he said on a conference call with Oregon Gov. Kate Brown. “My father started a mountain lion foundation. …My first pet was a river otter.”

Remember: The dams are downstream from Klamath farmers who fought a long legal battle over water that was diverted to protect fish in 2001.

That effort ended in June, when the U.S. Supreme Court declined to take up a case in which those farmers sought legal compensation for that water. A lower court had ruled that tribal water rights were senior to the farmers' rights.

Also in June, Klamath farmers protested a decision by a federal water project to cut off their allocations in order to protect endangered fish. 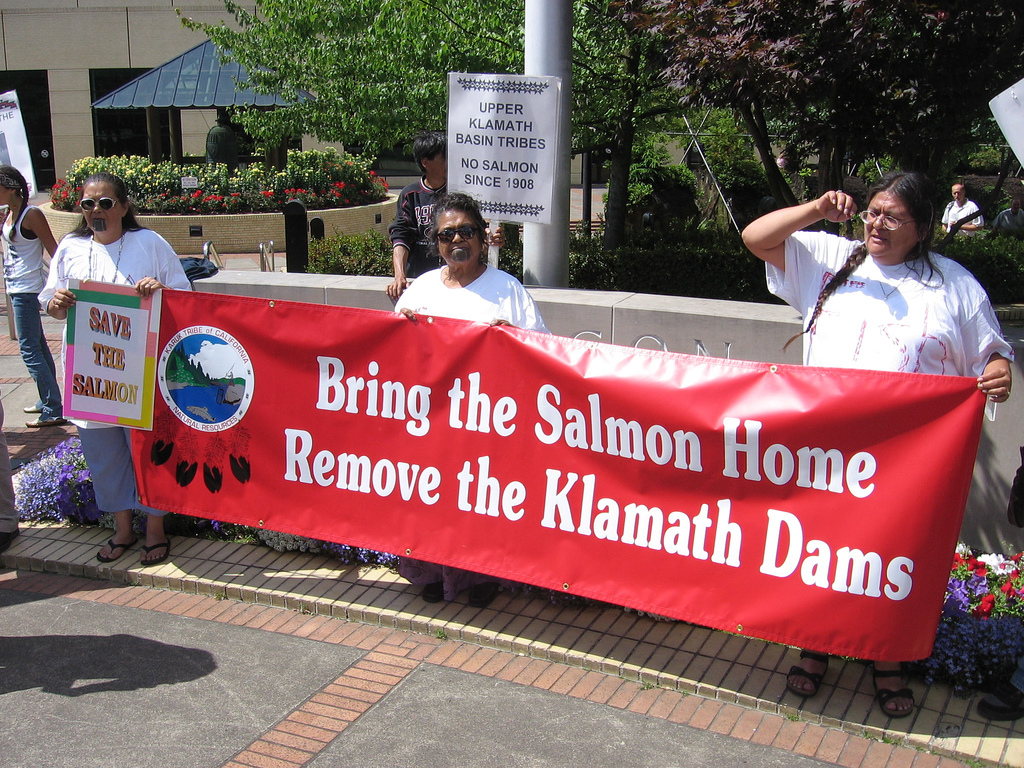 Demonstrators calling for the dam removal in 2006.

During a meeting of the Strategic Growth Council on Tuesday, Ross called it a “tremendous opportunity to really partner with farmers and ranchers” on the governor’s executive order to conserve 30% of the state’s land by 2030. She said the Healthy Soils Program, her “passion project,” will be at the center of the initiative. The Natural Resources Agency is set to begin stakeholder engagement on the order at the start of 2021.

Ross also mentioned that California’s Low-Carbon Fuel Standard is allowing for renewable natural gas generated by dairy digesters to be considered a replacement for fossil fuels. She called it building a “cow-powered highway.” 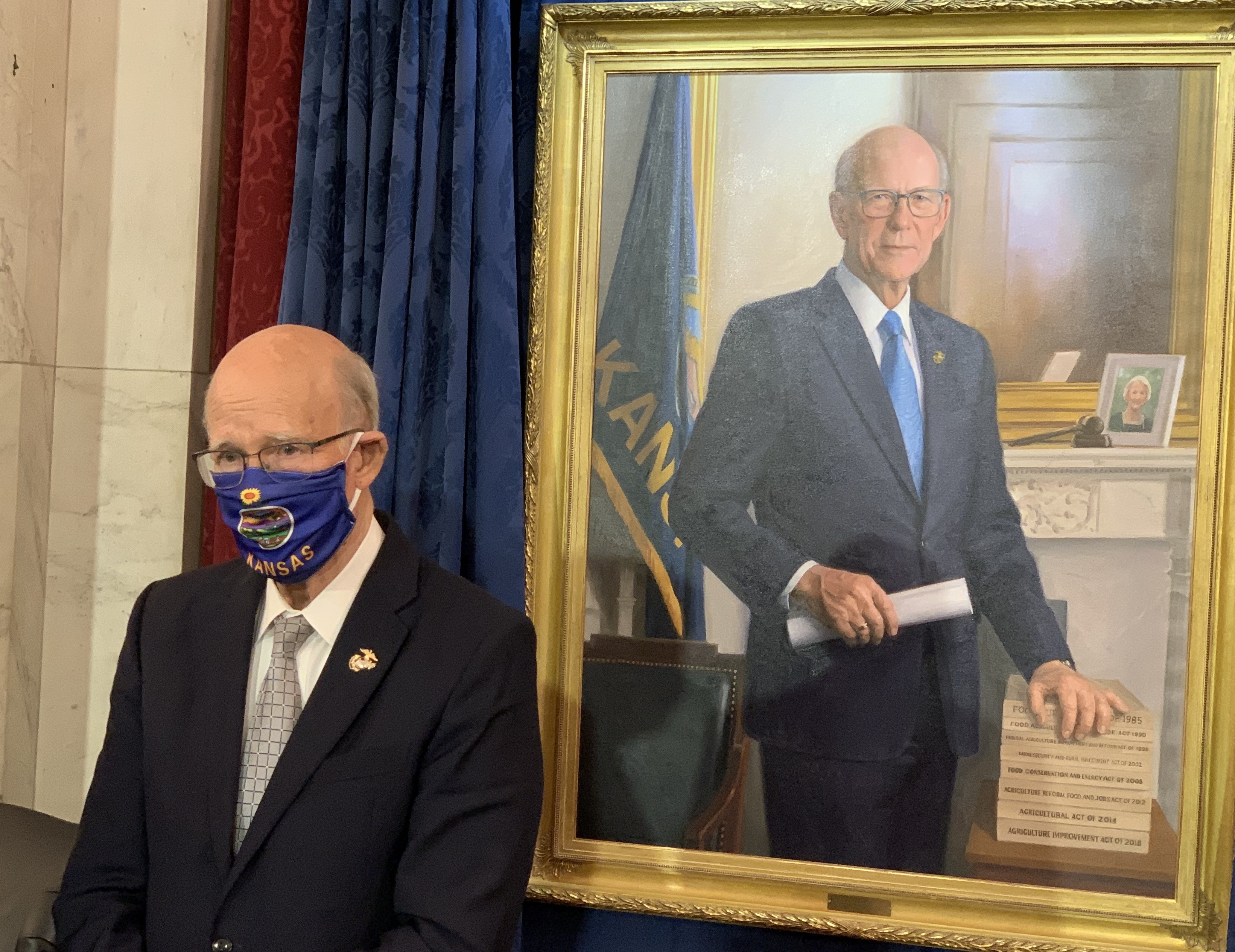 The proposals include some ideas that already have some Democratic support. This includes the concept of a USDA carbon bank to trade agricultural carbon credits. The proposal is the brainchild of the leader of President-elect Joe Biden’s USDA transition team, Robert Bonnie, a USDA undersecretary during the Obama administration.

Read about the alliance’s recommendations here. We’ll have more about the proposals’ prospects in this week’s Agri-Pulse newsletter.

Key Republican not sold yet on carbon credits

With the Climate Alliance’s proposals, the question is how much of the plan gets picked up.

Randy Russell, a top industry lobbyist who is advising the alliance, says the coalition’s intent is to get its recommendations included in climate legislation, and he thinks there’s a good chance a bill could move through a closely divided Congress. Biden transition officials are being briefed on the recommendations this week.

One key recommendation, creating a carbon bank at USDA, could be carried out administratively, according to a key Biden transition adviser. However, the alliance believes Congress needs to increase USDA’s CCC spending authority beyond its $30 billion limit.

By the way: Keep an eye on Sen. John Boozman, who will be chairman or the top Republican on the Senate Agriculture next year. He tells Agri-Pulse he’s concerned that ag carbon credits will benefit companies that trade in the offsets more than the farmers who generate them.

A group that Heitkamp co-founded, the One Country Project, sent out an email to promote the piece.

Producers likely won’t see another influx of COVID-19 cash until after the first of the year.  Boozman feels Democrats are holding out for a Biden administration.

“I don’t see us really getting anything done until after the first of the year and I think Vice President (Joe) Biden has got ideas along those lines and I think (Democrats) are purposefully waiting,” he told Agri-Pulse.

By the way: As of this week, the Coronavirus Food Assistance Program has paid out roughly $20.5 billion to producers in CFAP 1 and CFAP2, according to USDA. About $10.4 billion in CFAP2 payments have been distributed so far to 651,000 farms.

Several countries including the U.S. are airing concerns at the World Trade Organization over the European Union’s plan to tax imports based on their carbon intensity.

The U.S., Canada, Colombia, India, Norway, Paraguay, Russia, Saudi Arabia and Turkey all expressed reservations about the carbon border adjustment plan after the EU made a presentation this week on its European Green Deal, an initiative that the Trump administration has sharply criticized for threatening agricultural productivity and reducing farmers’ access to technologies such as pesticides.

A new paper from the Council for Agricultural Science and Technology says there are both technical and socioeconomic barriers to the increased adoption of ground and aerial robots in agriculture.

Among the engineering challenges are designing and deploying robots to work faster and more gently than human labor when interacting with plants and animals, the paper says. There’s also the fear that robots will replace humans, and the question of whether robots are economically viable.

“We’re certainly going to see [the use of robots] growing slowly,” Purdue Professor Dennis Buckmaster said on a CAST webinar Tuesday. He doesn’t think robots will be common on farms for at least another decade.

Jobs robots could do include harvesting fruits and vegetables, weeding and thinning in vegetable crops, precision chemical application and crop canopy management.

“Our top goal remains clear—avoid having the state become part of the economic problem, which means avoiding cuts to programs and middle-class tax increases.” — Senate President Pro Tempore Toni Atkins, in a statement about a new state budget analysis to be released today.

Daybreak: 'Welcome to the future': Pesticide use down by 66% since 1998
Daybreak: Newsom nominates ag leaders to task force
Daybreak: As Trump signs biological opinions, Newsom plans to sue