The next chairman of the House Agriculture Committee tells Agri-Pulse that climate policy will be a top priority for the panel in the next Congress.

Georgia Democrat David Scott said he wants to bring in scientists and engineers to testify before the committee on ways to help farmers “navigate the future and solutions to climate change.”

Keep in mind: On that score, Scott’s priorities will be in line with the incoming Biden administration, for which climate policy is certain to be a major focus during 2021. Scott acknowledged the politics of the issue, but said he wants to have a solutions-oriented conversation.

Pennsylvania GOP Rep. Glenn Thompson, who will take over as the committee’s ranking member, said climate is a priority for him, too, but he wants to make sure that it doesn’t result in overregulation.

For more from our interviews with Scott and Thompson, be sure and read this week’s Agri-Pulse newsletter.

Boozman: Will Vilsack back ‘mainstream’ ag?

Multiple media outlets are reporting that Tom Vilsack is President-elect Joe Biden’s pick to return to USDA as agriculture secretary.

Vilsack served in the position through Barack Obama’s administration and would be a logical choice to carry out Biden’s climate policy when it comes to agriculture. Vilsack advised Biden’s campaign on how to frame the climate debate for farmers and rural voters, including paying farmers for climate-friendly practices 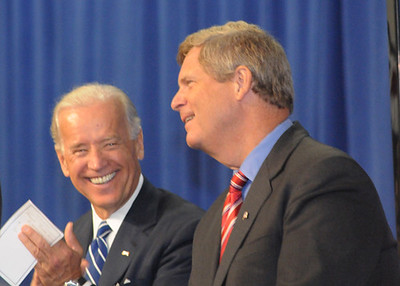 Sen. John Boozman, who will become chairman or ranking Republican on the Senate Agriculture Committee in January, isn’t ready to endorse Vilsack yet. “We want to know kind of where he’s at with things like climate, how that’s going to affect the ag community, if he’s going to be supportive of mainstream agriculture,” Boozman told Agri-Pulse.

By the way: Sen. Chuck Grassley, R-Iowa, said he would support Vilsack’s nomination and would be willing to introduce him at his confirmation hearing.

“I like what Vilsack did as secretary of agriculture for eight years, and if he was in for another four years it would be ok with me,” Grassley told reporters.

A water resources bill that should make it easier to fund inland waterway projects is one step away from the president’s desk. The House on Tuesday passed the compromise reauthorization bill by voice vote, sending it to the Senate for final action.

Under the bill, 65% of the funding for inland waterway projects would come from general funds. The Inland Waterways Trust Fund, which is funded with barge tax revenue, would be responsible for the other 35%. Project costs are now split 50-50 between the two sources.

Vaccinating rural residents for COVID-19 could be especially challenging, given the relatively low vaccination rates for the flu among Medicare patients in rural areas, according to an analysis by USA Today.

“Rural counties from west Texas to northern Nebraska to the Upper Peninsula of Michigan had some of the country’s lowest vaccination rates,” the newspaper reported, citing 2017 data. The pattern “holds true across America. The more rural the county, the lower flu vaccination rates tended to be.”

Meanwhile: The League of United Latin American Citizens “is calling for prioritization of distribution of the COVID-19 vaccine to food and agricultural workers” alongside doctors, nurses and first responders.

Advisers to the Centers for Disease Control and Prevention health care workers and people living in long-term care facilities should be the top priority.

UK dropping retaliatory tariffs on US

The UK isn’t just leaving the European Union on Jan. 1. It’s also abandoning the EU’s retaliatory tariffs on the U.S. The EU will continue to levy tariffs on U.S. goods – including ag and food commodities – to retaliate for U.S. steel and aluminum import taxes as well as U.S. subsidies for Boeing.

British International Trade Secretary Liz Truss said Tuesday evening that Britain wants to “de-escalate the conflict and come to a negotiated settlement, so we can deepen our trading relationship with the U.S.”

Top trade officials in the U.S. and Ecuador have signed a new agreement to try to boost trade between the two countries.

The U.S. is one of Ecuador’s largest suppliers of imported soymeal and wheat. The soymeal is especially important to Ecuador’s economy because it’s primarily fed to the country’s growing shrimp and tilapia industry. Ecuador imported $469 million worth of U.S. ag commodities last year, up from $386 million in 2018, according to USDA data.

“The United States and Ecuador have worked closely in recent years to address a number of trade issues important to stakeholders in both countries,” said U.S. Trade Representative Robert Lighthizer said.

He said it. “You know, I’m going to let Joe Biden handle that. I’ve got my hands full over here trying to deal with all that I’ve got to deal with.” – Rep. David Scott, D-Ga., when asked about Tom Vilsack returning as agriculture secretary.