China is emptying out U.S. corn and soybean supplies, helping make the 2020-21 marketing year a success for American farmers. That’s ramping up the pressure on the new Biden administration to work out a sustainable trading connection between the countries even as the political relationship remains fraught.

“We’re encouraged by the numbers that we’re seeing, but we haven’t taken an eye off the long-term stability of the relationship,” Lesly McNitt, director of public policy and trade for the National Corn Growers Association, tells Agri-Pulse. “Long-term certainty and stability is a priority that we would like to see the U.S. and Chinese governments work toward.”

Chinese buyers went on a shopping spree for corn last week, making commitments to purchase about 5.5 million metric tons of U.S. corn for delivery in the 2020-21 marketing year. Those purchases included a single export grain sale announcement from USDA on Friday for 2.1 million tons.

But the situation is complicated, according to Secretary of State Antony Blinken, who has been suggesting in recent days that the Biden administration can cooperate with the Chinese on some things while at the same time remaining critical of the government.

He says he stands firmly behind his belief that the Chinese government committed genocide against the Uyghurs, a religious minority in the country, but also maintains the U.S. and China can work together.

White House spokeswoman Jen Psaki said Tuesday the U.S. will take a “multi-layered” approach to how it deals with China. She also confirmed that there are no plans yet for a call between President Joe Biden and Chinese President Xi Jinping.

The U.S.-China relationship “is arguably the most important relationship that we have in the world going forward,” Blinken said last week in his first press conference after being sworn in. “It’s going to shape a lot of the future that we all live, and increasingly that relationship has some adversarial aspects to it. It has competitive ones. And it also still has cooperative ones.”

The example he gave on cooperation was combating global warming, but it’s the future of international trade that has groups like the U.S. Grains Council, the National Corn Growers Association and the U.S. Soybean Export Council concerned.

After a depressed year in trade in 2019 amid rising tariffs being set by both the U.S. and China, 2020 offered renewed optimism thanks to the trade war détente reached in February. Neither side lifted its tariffs as part of the Economic and Trade Agreement Between the Government of the United States of America and the Government of the People’s Republic of China, better known as the “phase one” deal, but China did agree to purchase $80 billion worth of U.S. ag commodities over two years, and the country soon began exempting U.S. commodities from tariffs.

Biden has said he has no intention of immediately lifting the U.S. tariffs on China, and Missouri Corn Growers Association CEO Gary Marshall says he hopes the U.S. and China will continue to uphold the trade agreement.

“We’re hoping that the Biden administration continues the second year of the China agreement,” he told Agri-Pulse. “There’s been no indication that they’re not going to do that. We think it’s going to be a fantastic year for corn exports, not only to China, but around the world.” 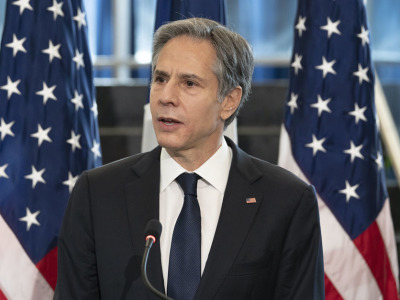 As to whether the U.S. and China will lift their tariffs, that hasn’t been decided, Blinken said Monday.

“We’re reviewing all of that,” he told MSNBC’s Andrea Mitchell in an interview. “We have to make sure that any time we act, the first question we ask ourselves is: Is this advancing the interests of our own people? Is it making them more prosperous? Is it advancing their security? Is it extending their values? That’s the first question we have to ask. And so when it comes to something like a tariff, is it doing more harm to us than it is to the country they’re being wielded against? That’s the question we’re asking.”

Jim Mulhern, CEO of the National Milk Producers Federation, says dairy farmers are also counting on the Biden administration to carry out the “full implementation of the phase one U.S.-China trade agreement,” but stressed that he would like to see an end to the “market-damaging retaliatory tariffs on U.S. dairy exports to China.”

Meanwhile, China has been on a charm offensive. The Global Times, a state-run media outlet, ran an article on the “message of cooperation to the US” that Communist Party officials are expressing to the Biden administration. The article, below an illustration of shaking hands in front of a backdrop of both countries’ flags, quotes Chinese Vice Foreign Minister Le Yucheng saying, "Anything is possible when China and the United States choose to cooperate."

And the massive 2.1-million-ton corn purchase China made Friday may have been a message itself, said Arlan Suderman, chief commodities economist for StoneX Group Inc.

“Why make such a big purchase right now versus buying all along that would have less market influence?” he said. “These are just a lot of questions that are unanswered.”

In other words, why not make more frequent smaller purchases that don’t have the effect of driving up prices for future business? And the purchases, he stressed, come at a time when some Communist Party officials are advocating self-sufficiency.

And China has reentered the U.S. ethanol market, buying 8.6 million gallons in November – the largest purchase the Chinese have made since 2018, according to the Renewable Fuels Association.

China’s failure through much of 2020 to make big purchases of ethanol was considered a stumbling block to reaching the first-year goal of the “phase one” deal, but now that trade looks like it is resuming at a record pace.

“I’ve been saying it all along,” McNitt said. “Ethanol is a big opportunity and we’re coming up on the first year of the U.S.-China ‘phase one’ deal and China is still a little bit behind the ball on its purchase commitments. Ethanol would be a significant way to move the needle.”