USDA’s 97th annual Ag Outlook Forum kicks off this morning, and for the first time the meeting will be held online. USDA’s new chief economist, Seth Meyer will provide the department’s annual forecast for crop and livestock production this year.

The meeting will be missing the traditional address from the agriculture secretary since Tom Vilsack is still awaiting confirmation. But the department’s new chief of staff, Katharine Ferguson, will be outlining the administration’s policies, and top USDA policy advisers, including Robert Bonnie, also will be speaking. Bonnie is helping shape USDA’s climate policy.

Looking ahead: On Friday, Agri-Pulse President Sara Wyant will moderate a discussion between some of the nation’s top farm leaders on hot topics in agriculture. 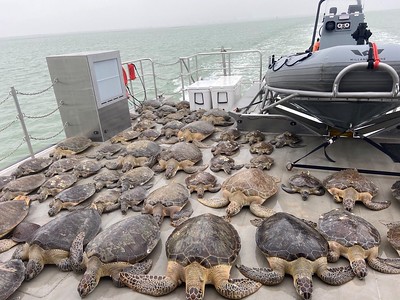 How cold was it? Sea turtles stunned by the rare Arctic blast had to be rescued near Brownsville, Texas. (Texas Parks and Wildlife)

The central U.S. and eastward should start to see milder, dry weather return late this week. But USDA Meteorologist Brad Rippey tells Agri-Pulse the impacts on agriculture from the polar vortex will still be felt up to a year from now.

Damage to citrus trees in Texas’ Rio Grande Valley may affect next year’s orange and grapefruit crops, Rippey says. About 55% of the current citrus crop hadn’t been harvested yet and is lost, according to the Texas Farm Bureau.

Rippey says the Plains’ winter wheat crop may have been lost, too, and vegetable production in Texas as well as sugarcane crops in Louisiana and Texas are at risk.

Livestock, poultry, and other farm operations will have to come back from the extended cold wave and power outages.

Extreme cold and snow battered most of the central and southern U.S. this past week. Temperatures in the Texas Panhandle plunged as low as 20 degrees below zero.

Blinken: US can do business with China while addressing abuses

The U.S. can continue to do business with China while at the same time holding the country accountable for humanitarian and other abuses, says Secretary of State Tony Blinken. That should come as a relief to U.S. farmers because China is breaking records for its agricultural imports from the U.S.

When asked in an interview by NPR’s Mary Louise Kelly how the U.S. can do business with a country that is guilty of genocide, Blinken responded: “This has been a challenge … for American administrations going back decades and decades, and we have to be able to find ways to do both.”

The American Soybean Association, National Corn Growers Association and National Cotton Council are joining the fray over a U.S. company’s efforts to convince the Commerce Department to slap duties on phosphate fertilizer imports from Morocco and Russia. The U.S. International Trade Commission is currently weighing The Mosaic Co.’s claims that they are harmed by subsidized imports. A decision is expected in March.

“We believe countervailing duties on these imports will have a negative impact on the availability of phosphate fertilizer in the United States and, in turn, adversely affect crop production and farmer livelihoods,” ASA President Kevin Scott said in a statement after the farm groups filed their joint comments with the ITC.

The Commerce Department has already determined that if the ITC rules in favor of Mosaic, it will levy countervailing duties of 19.97% on imports from Moroccan producer OCP, 47.05% on Russian producers PhosAgro and EuroChem and 17.2% on all other Russian producers.

Commerce set preliminary duties on Moroccan and Russian phosphate fertilizer in November that would be returned if Mosaic loses its case, but companies like OCP had already stopped shipping to the U.S. out of concern they would have to pay the duties. 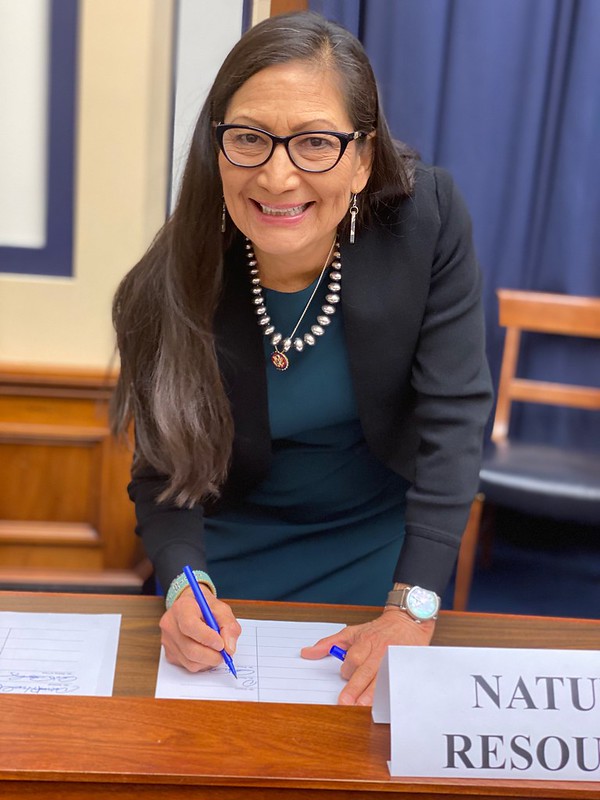 Next week’s confirmation hearing of Deb Haaland (above) to lead the Interior Department should include some fireworks, as Republicans plan to question her sharply over her opposition to fracking and President Joe Biden’s current moratorium on new oil and gas leasing on federal lands.

The Senate Energy and Natural Resources Committee will hold the hearing Tuesday, and ENR member Steve Daines of Montana has vowed to “work to block the nomination any way he can,” a spokesperson said Wednesday, including by putting a hold on it. Daines issued a statement Feb. 5 criticizing the moratorium and noting Haaland’s support of the Green New Deal.

On Monday, Texas Sen. John Cornyn, who is not an ENR member, cited a Wall Street Journal article that reported Haaland had joined protests against the Dakota Access pipeline and opposes fracking. In response, ENR member Sen. Bernie Sanders said, “Great news. We need an Interior secretary who has the guts to take on fossil fuel CEOs whose greed is destroying the planet.”

Keep in mind: If Haaland has no GOP support, Democrats will have to stay united to get her confirmed. ENR Chairman Joe Manchin, D-W.Va., hasn’t said how he will vote on Haaland, but he told E&E News he tries to be “deferential” to administration picks for cabinet positions.

Read our report on the task force here.

USDA’s Animal and Plant Health Inspection Service is using more than 100 employees to help in COVID-19 vaccination efforts, as the Biden administration seeks to meet its goal of administering vaccines to 100 million Americans in Biden’s first 100 days in office.

Most of the APHIS employees are in Nevada and Oklahoma. Eight also are in Texas, six in Washington state and four in Oregon, with another nine virtually deployed to help the Federal Emergency Management Agency, which is leading the vaccination effort.

Additional deployments will be announced later.

He said it. “President Trump was right to take a tougher line on some of the egregious things that China has done and is doing that are counter to our interests and counter to our values.  But I think the way that we went about doing it did not produce results.” - Secretary of State Tony Blinken to NPR.