Lawmakers are hoping to protect vulnerable H-2A temporary guestworkers from exploitative practices by returning to two earlier legislative proposals. Ag groups are pushing back by arguing the measures duplicate existing laws and add unnecessary burdens to an already highly regulated area of agriculture.

Assembly Bill 857 picks up where former Senator Bill Monning of Carmel left off before terming out of office in 2020. Monning spent two years pushing a measure to require more notifications of housing and labor rights for H-2A workers. Further amendments added provisions that would boost pay for travel time, require special employee outreach during emergencies, and strengthen lighting standards for nighttime work.

Gov. Gavin Newsom applauded Monning’s bill for attempting to create “accessible and easy to understand notifications.” But Newsom vetoed the measure because it departed from previous H-2A notice requirements and would lock in standards for the labor department. Newsom said he would instead direct the department to “develop and maintain a template contemplated in this bill” for H-2A employers.

Led by Assemblymember Ash Kalra of San Jose, AB 857 mirrors Monning’s measure. During a committee hearing last week, Kalra pointed out that about 100 California growers and farm labor contractors hired more than 25,000 foreign farm workers through the federal H-2A visa program in 2020—a number that has been increasing annually.

In testifying in support of the measure, Mark Schacht, the legislative director for the California Rural Legal Assistance Foundation, argued the federally approved job orders often include conditions that are illegal under California law and that no agency is charged with providing an accurate summary of these rights to guestworkers. 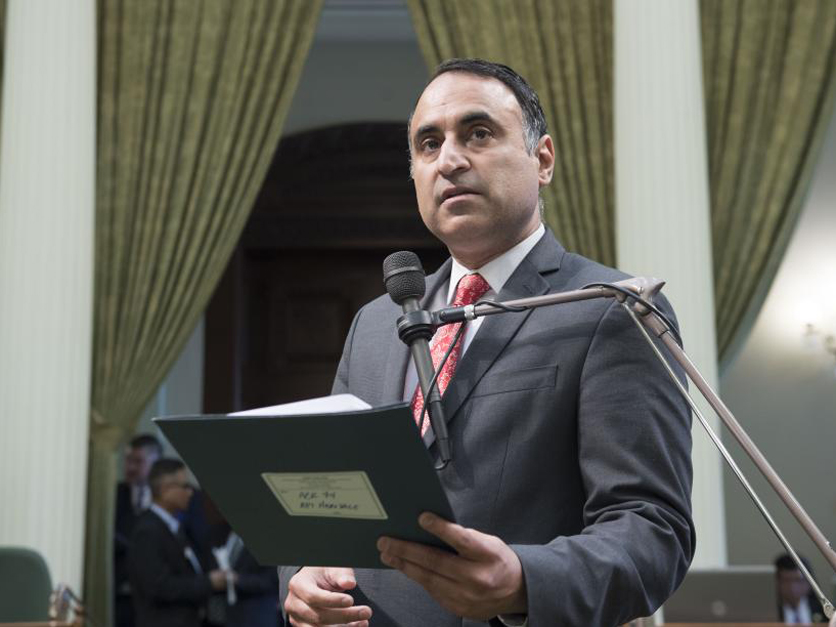 “These workers already receive extensive written notification in their primary language on their first day of work,” said Little.

Kalra said he is working with the Newsom administration to grant the labor commissioner more discretion for updating the template to reflect Kalra’s proposal. The lawmaker defended the provision on compensating workers for travel time against the arguments of the Farm Bureau as well as the Western Growers Association.

“These are workers under the control of the employer,” said Kalra. “There's a reality, and there's a delusion as to what voluntary is. The reality is that when we're talking about these farm laborers, the employer picks them up, tells them where to be, when to be there, takes them to a worksite, and the worker doesn't necessarily even know where it's going to be.”

Western Growers Vice President of State Government Affairs Matthew Allen said that expanding the definition of what is considered voluntary “goes well beyond” the California Supreme Court definition in a 2000 case ruling. Other court decisions required that travel time be paid at no less than minimum wage, while AB 857 calls for compensating at the employee’s full rate of pay.

The Assembly Labor and Employment Committee approved the measure along party lines.

Like Kalra, Asm. Freddie Rodriguez of Pomona (above) in the same hearing called for more protections for H-2A workers from the deceitful practices of labor recruiters. Rodriguez’s bill argues that along with labor exploitation, the workers are subject to human trafficking.

“Trafficking is a difficult crime to prevent,” said Stephanie Richard, a policy director for the Coalition to Abolish Slavery and Trafficking, a sponsor of the bill. “But today we can protect these vulnerable workers, many of whom are essential workers who have been hardest hit by the pandemic and its continuing negative economic impacts.”

Bryan Little said that in 2014 he worked on the original bill with the author’s office to confirm that it would not cover those contractors. Kalra stepped into the debate to say that one of the author’s staff members had testified for a related bill of his in 2018, saying that the intention was actually to include farm labor contractors in the legislation.

As with AB 857, Little and Allen argued AB 364 duplicates existing laws, particularly those involving federal applications and enforcement for the visa program. Little said the state has for decades required contractors to obtain and maintain a license, which entails extensive continuing education requirements on a continual basis along with monitoring by the labor commissioner’s office.

“H-2A visas were simply not intended to be covered by the [state visa holder] program because of the lack of necessity to do so,” said Allen.

The committee, which is chaired by Kalra, also approved AB 364.