Two narrow bills in the California Assembly have ignited a much broader debate among lawmakers over protecting Golden State farmers from competitors who are not held to such strict labor and environmental standards. The state’s new and controversial animal confinement law, Proposition 12, may have opened up a new pathway for California to hold importers to those same standards, “leveling the playing field” for local farmers.

The debates have created unlikely allies among farm groups, environmentalists and labor advocates. For lawmakers friendly to agriculture, however, protecting farmers comes at the cost of adding further regulatory burdens onto other businesses, and for some trade groups it pits their members against each other.

“I'm just going to always fight for my farmers,” said Assemblymember Cecilia Aguiar-Curry of Winters, in defending her bill on olive oil labeling last week in the Assembly Health Committee. “We continue to beat them up. I'm not going to beat them up. I want them to be successful and the California brand continue to be known throughout the nation.”

Assembly Bill 535 would set guidelines for when olive oil producers could use the name California on their labeling. Aguiar-Curry’s bill would update a law on the books since the 1990s that prohibits the use of the term “California olive oil” on a label unless it is 100% from California. She argued that the company California Olive Ranch found a loophole in the law by not including “oil” in the name.

“Just a few years ago, my opponents produced their product with 100% California olives,” explained the lawmaker. “That product was changed shortly after tens of millions of dollars were invested by an East Coast endowment.”

Now as little as 14% of the oil in those products comes from California olives, she said, arguing this deceives consumers and depresses olive oil prices in the state while putting growers at a disadvantage. Samantha Dorsey, president of McEvoy Ranch in Petaluma, said the bill aims to protect truth in labeling.

“You guys have done a really good job of setting the bar high with labor standards, emission regulations, water usage controls, food quality standards, inspections, payroll taxes, equipment, taxes, property taxes,” said Dorsey to lawmakers in the hearing. “To be compliant in California, I have to charge a premium price for my product, because it's produced in a premium region. It's super disruptive to my business, and every other real California olive oil producer, when we have to compete against this foreign oil that's produced with fewer regulations at a significantly lower cost structure.” 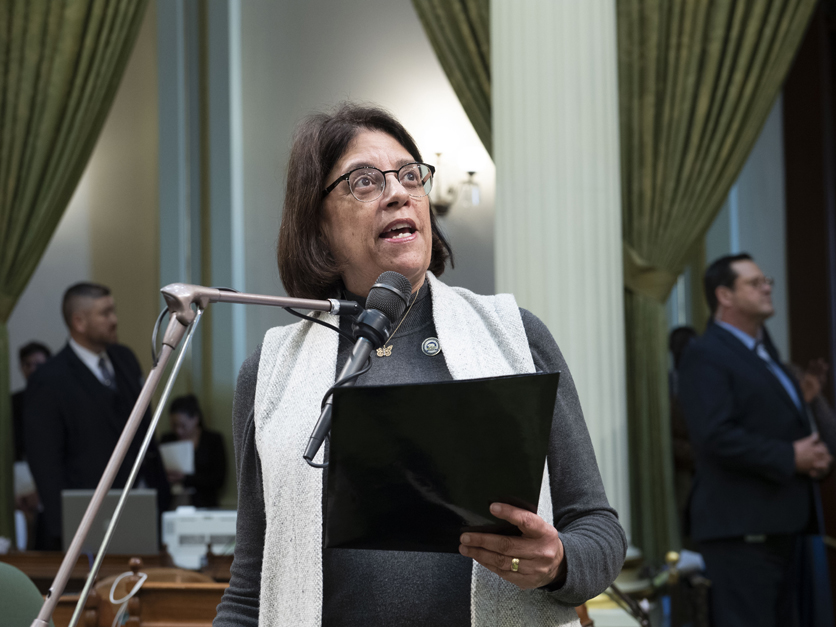 Asm. Cecilia Aguiar-Curry, D-WintersAlso testifying in support was Carolyn Veal-Hunter, an attorney for the Yocha Dehe Wintun Nation, who said the tribe produces olives with an attention to detail and a Mediterranean climate that have helped to establish the Golden State’s strong reputation for olive oil.

In an Assembly Agriculture hearing two days later, Asm. Eduardo Garcia introduced a bill that would also safeguard California’s ideals “by ensuring their produce sold in the state meets those same expectations that we've put on our own farmers here in California,” he said.

“I don't believe that we've adopted these regulations to purposely hurt our farmers,” said Garcia. “But clearly we've heard that it has caused a significant economic burden to some.”

Bianco explained how the state has for nearly 40 years been reducing the chemical inputs that growers can apply, while other states and countries are allowed “to freely ship fruits and vegetables containing these very chemicals applied by farmworkers and soaked into their ground.”

Bianco’s concern has been shared widely in the industry, particularly after Gov. Gavin Newsom banned the use of the insecticide chlorpyrifos in the state in 2019.

Proponents said the bill would also protect farmworker livelihoods. Hernan Hernandez, executive director of the California Farmworker Foundation, said the farmworker population of about 20,000 in the Coachella Valley has dropped by 60% due to crop production moving beyond state lines. This struck a chord with conservative lawmakers.

“Since I've been in this building, the regulations and the burden that we put on California ag and the requirements that we impose on them are tremendous,” said Republican Asm. Heath Flora of Ripon. “There is a cost to doing business in the state of California that sometimes, in my opinion, is really egregious and quite frankly aggressive.”

Flora was encouraged by the focus on farmers but raised concerns over product shortages if California farmers could not fill the loss in imports resulting from the added regulations. He also worried about costs to small mom and pop distributors who could be fined for not having adequate documentation, and said it would be felt by shoppers as well. 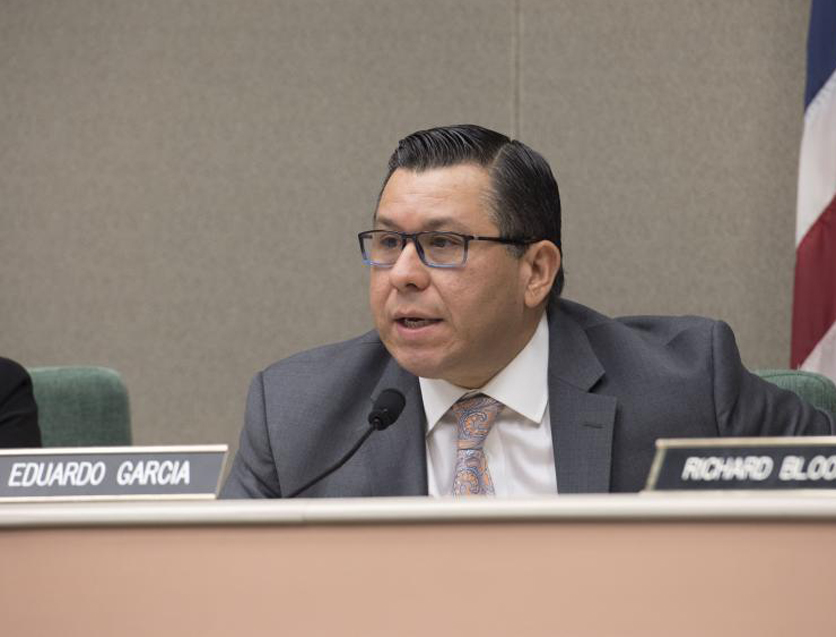 “Make no mistake about this, this is going to be a cost increase to the consumer,” said Flora. “There's a balance to all of this.”

Opponents argued the bill would make it impossible to import the listed products and it would potentially violate interstate commerce laws.

“California has the highest minimum wage in the country,” said Leticia Garcia, who directs government relations for the California Grocers Association. “And we do not have control of how other states and countries set the minimum wage.”

Republican Asm. Jordan Cunningham of Paso Robles added that it may violate international treaties as well.

California farmers lose $2.1B to West Coast port disruption
Daybreak: A few of the ag-related bills passed in the Legislature

Eduardo Garcia responded that the bill specifically focuses on the issue of health and safety and not the economic circumstances that intersect with Commerce Clause concerns. He said precedent already exists for this with Prop. 12 as well as Prop. 2 in 2008, which added spacing requirements to the confinement of egg-laying hens. Those laws hold the same restrictions to certain imported products.

Republican Devon Mathis of Visalia shared the same concerns on commerce but maintained that agriculture in California “is extremely important” and small growers should be the focus.

“We see a lot of our normal agricultural association allies not showing support or opposition on this bill,” said Mathis. “What are we doing for the California grower? Not for the association.”

“I see lemons on the list, but I don't see Citrus Mutual on the support list,” she said.

Garcia said that other producers wanted to support the measure but their associations were conflicted. He acknowledged the efforts of the California Farm Bureau, Western Growers and others representing fruits and vegetables in helping to craft the list.

Protecting the California brand was front of mind for Flora as he sat on the Health Committee and considered Aguiar-Curry’s bill.

“This particular olive oil is becoming the nexus for this fight,” he said. “It's the tip of the spear. And I do believe that is unfortunate.”

Flora felt the company was following the law in properly labeling its products. California Olive Ranch CEO Michael Fox explained the shift to blended olive oil was a way to make up for a supply shortage due to an unseasonably cold winter.

“Our biggest challenge has been the fact that our olives are alternate bearing,” said Dan Kennedy, a farmer partner with California Olive Ranch, “which makes it hard for marketing our crop on a consistent level without bringing the other products to help supplement the off years.”

Fox said the launch of the new “global” blend helped drive up the price per liter of 100% California products by 28% over the next two years, with the company’s California growers selling 123% more liters today. Fox dismissed Aguiar-Curry’s bill as “a philosophical disagreement with our business strategy” from his competitors.

“There's a lot of agreement on both sides,” said Republican Asm. Frank Bigelow of O’Neals. “With respect to this, they all want to protect the brand.”

He said the issue comes down to a federal trademark dispute and worried the bill could preempt FDA labeling laws and lead down a slippery slope.

“Do we want to pick on other things that say California, like California Pizza?” asked Bigelow.

Aguiar-Curry pushed back, saying her bill would simply adjust an existing law but at the heart it is a fight for California farmers—a sentiment that Bigelow shared, though he abstained from voting on the measure.

“You and I are very good friends,” said Bigelow. “And so this is an odd place for us to be.”