As restaurants reopen and other pandemic restrictions continue to ease, food producers are watching to see how consumers' buying and dining habits will change. For fishermen, too, questions loom about demand, especially for higher-end products such as Dungeness crab. And for this major west coast fishery, the current season has had a series of additional hurdles compounding pandemic impacts.

The commercial Dungeness season in California opened late because the state's Risk Assessment Mitigation Plan (RAMP), which is in full-force for the first time this season, determined elevated risk to certain marine animals. The California Department of Fish and Wildlife (CDFW) developed the RAMP with input from fishermen, environmental groups and other stakeholders to find ways to reduce entanglements of whales and sea turtles in Dungeness crab fishing gear. This week, CDFW will conduct another risk assessment to determine whether migrating blue or humpback whales have entered fishing waters, which could prompt an early end to the season.

Once regulators allowed the season to open, commercial Dungeness fishing in California and Oregon was further delayed when a dispute broke out over pricing. After missing the potentially lucrative holiday season, fishermen finally got out and catches were not huge.

“It’s a little bit tough right now,” said Dick Ogg, who has fished commercially out of Bodega Bay for more than 20 years. “That’s kind of an understatement.” Ogg is a member of the Dungeness Crab Gear Working Group, which contributed to the RAMP. Ogg says he and other vessel operators have come up with a variety of strategies to reduce the chances of migrating whales or endangered Pacific leatherback sea turtles getting tangled up in gear.

For example, they reduced their use of weights to pull ropes from the water’s surface, where they attach to buoys, and instead use shorter ropes that form a straight line down to the crab pot. He says preventing a W-shape from forming in the line keeps animals from swimming into a rope loop that can wrap around them. Entanglements hit an anomalous high of 18, among whales and sea turtles, in 2015-2016, prompting the RAMP. Numbers since have fallen to just one in the 2019-2020 season. 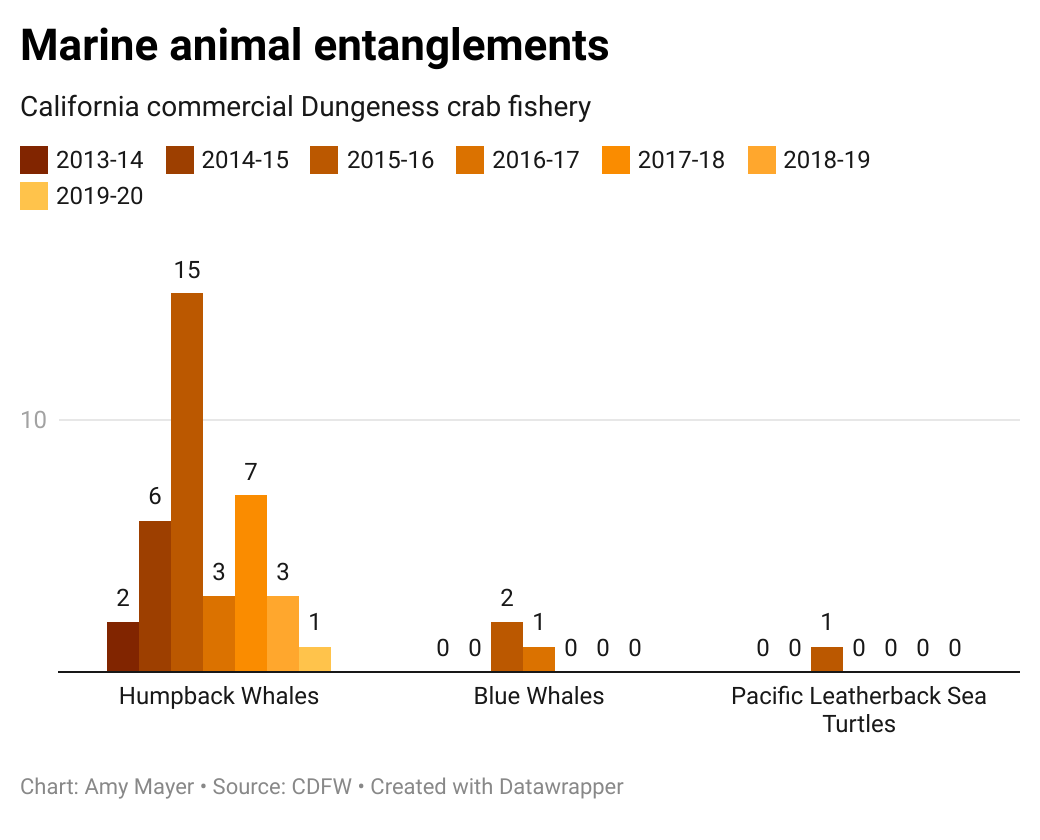 “I don’t want to jinx it,” he said, but things are heading in the right direction.

Washington and Oregon have their own strategies for preventing entanglements, and while those states allow Dungeness fishing later into the year—until mid-August in Oregon and mid-September in Washington, whereas the latest end date in California is July 15—the states monitor how many vessels are out and may reduce the number of pots they can set.

Bartling said this year’s challenges also include a predictable decline in the mature crab population. The numbers vary greatly over a 10-year period, he explained, and five years ago, a marine weather event called a “blob” brought some unusually warm water. That likely led to fewer new crabs surviving. They typically take about five years to mature so this year, which already would have been in the valley of an up and down cycle, is even smaller.

It’s still a robust fishery, though. “From a sustainability standpoint, there’s not a resource issue,” Barling said. But from what he’s heard, “the catch rates have been fairly low this year in comparison to other years.”

Susan Chambers, deputy director of the West Coast Seafood Processors Association, said the overall lower catch this year has actually helped the industry use up some surplus from the pandemic reductions in sales last year.

“Typically, crab is considered a luxury item,” she said, eaten more often in restaurants than at home. Unlike some other foods, it wasn’t one that could easily be repackaged and redistributed to retail or direct-to-consumer sales, though Chambers said she knew of some seafood sellers who did parking lot pick-ups of boxed orders, similar to what some produce farmers did early in the pandemic.

Now that things are starting to open up, the frozen stock is moving. “With a less abundant crab season, we probably won’t have as much in the freezers next winter as we did this winter,” she said. For those who are still bringing in crab, Chambers said prices have shot up. The opening average price in Oregon was $3.86/lb. But now?

Ogg pulled his crab gear out early this year, deciding to put his energy into prepping for the salmon season. But he said for the vessels still at it, the higher market prices made up for low catches.

“That was the only thing that made a difference,” he said. “The volume was low but the price was high.”