One year later: Within diverse produce sector, pandemic experiences mostly not as bad as feared

This is the fifth and final story in our series looking back on the impact of the COVID-19 pandemic on food and agriculture. Previous stories have covered rural broadband, the nation's ag workforce, the livestock sector, and food banks.

Florida farmers got hit hard when the pandemic shut down food service just over a year ago. The Sunshine State had myriad crops ready to harvest, including lettuce and other leafy greens, sweet corn, green beans, squash, cabbage, strawberries, blueberries, melons, and tomatoes.

“We’re talking millions and millions of pounds of product, all at once,” that suddenly had nowhere to go, said Mike Aerts, director of science and regulatory affairs for the Florida Fruit and Vegetable Association. "About 60% to 70% of that produce had been planned for distribution to schools, restaurants, theme parks and other food service settings. “Those markets literally went away overnight and these are perishable commodities.”

Images of crops rotting in the field made the impact feel even worse for Florida growers.

“They hated it,” Aerts said. “That’s the last thing you want to see happen when you put your blood, sweat and tears into producing a crop like that.”

The Florida Department of Agriculture and Consumer Services estimated in mid-April 2020 that crop losses could exceed $522.5 million.

In time, producers adjusted distribution to retail stores, launched farm box programs for direct-to-consumer sales and generally regrouped. It was not fast or easy.

“We did a lot of donations during that time,” Rumenik said, to local charities and to people in need as far away as the Bahamas. 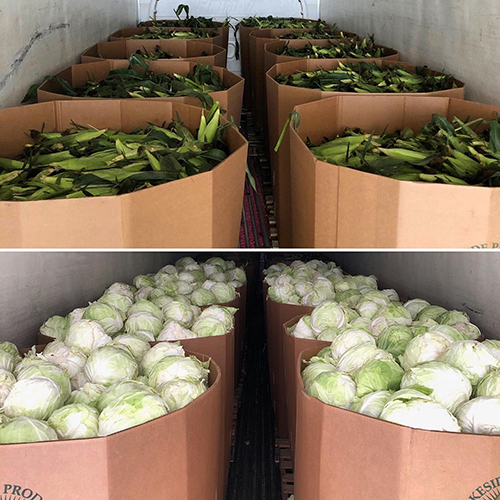 Donated Florida cabbage and sweet corn ready for shipping to the Bahamas.

Across the country, Steve Brazeel, CEO of California-based SunTerra Produce, said initially some of his fields also went unharvested. “We lost about 250 acres between iceberg and romaine lettuce,” he said. Later, he landed a contract for the Farmers to Families Food Box program and partnered with food banks.

For Georgia produce farmers, whose season ramps up in March and April, the first jolt came with the fear that H-2A workers wouldn’t be allowed into the country.

“It was a very scary few days there,” Charles Hall, executive director of Georgia Fruit and Vegetable Growers Association, remembered. But because of the timing of their major crops, Georgia farmers didn’t have as much immediate loss in the field. “Yes, they probably lost some, but it was not a significant amount to affect their harvest.”

In many places, produce growers saw an increase in consumer willingness to drive out to a farm or buy a box of fresh produce delivered to urban and suburban areas. Both Florida and Georgia, for example, had state-supported programs to help wholesale growers adapt to direct-to-consumer sales. Hall said the “Georgia Grown To Go” program brought farm-fresh produce by the truckload to consumers who could drive up and buy a box. Others visited a farm.

Hall said he saw “pictures of cars backed up into the highway going to the farm to get their produce.”

Brazeel said some of his worst fears did not materialize. Early on, with spring barbecues and parties canceled and many shoppers hesitant to touch anything, he thought selling fresh sweet corn would be difficult. He imagined people might ignore traditional displays that let them select certain ears. He even toyed with bagging ears of corn ahead of delivering to retailers.

“But it was the opposite,” he said. “It sold like hot cakes.”

Turns out, many farmers experienced better-than-expected sales in 2020, even with the pandemic, and that may be especially true for smaller farms serving their local communities.

“When the lockdowns started to happen, I had a huge influx of people wanting to sign up for my (community supported agriculture),” or CSA, said Liz Graznak of Happy Hollow Farm in Jamestown, Missouri, “and that was awesome.” Demand was also up when she brought products to the Columbia Farmers Market, which never shut down. In the past, farmers' market sales accounted for about 30% of her total, but in 2020 that increased to 40%.

“The demand just skyrocketed because of so many people not wanting to go to grocery stores,” she said. But market days also looked different; people stood in long lines waiting to get to individual farm stalls, which were spaced farther apart. And Graznak changed how she and her staff served customers.

“One person, myself, would be touching the produce and somebody else would be touching the money,” she said. For CSA subscribers, she switched things up to reduce the exchange of items between the farm and the customers’ homes. Where in the past, customers took a box home and brought it back, during COVID “we started packing orders in a removable plastic liner.” Customers simply pick up the whole liner. She says it’s faster and easier, which she appreciates, but she’s not sure she’ll continue after the pandemic because “there’s a lot of things that are really great about the plastic sleeve, but I hate the plastic.”

The pandemic demand led Graznak to increase from four full-time and two part-time employees in 2019 to seven full-time and four part-time in 2020. She kept more workers on through the winter than in years past and said she is “planning and planting as if our sales will be what they were last year, but I don’t know and I’m very nervous about that.” If sales drop, she won’t have the income to pay the additional staff.

“The pandemic forced people to think more about where their food was coming from, so that was a win,” she said. “I just hope that we can keep that.” 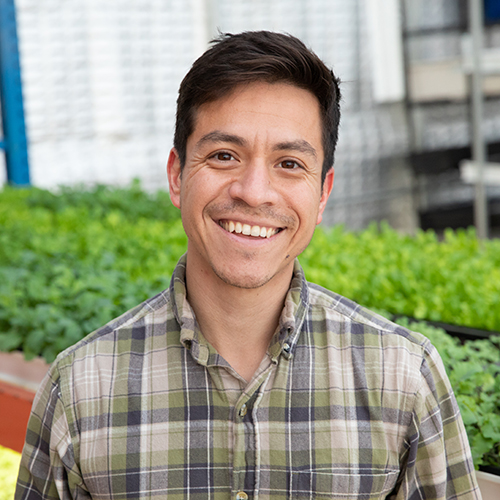 For Emerald Gardens in Bennett, Colo., the pandemic became a catalyst for realizing business aspirations co-founder Roberto Meza had not yet started to pursue. The farm grows microgreens, such as young broccoli, pea shoots, and radishes, in a year-round greenhouse for distribution to retailers, restaurants and within other farms’ CSA boxes. It’s expanded into leafy greens, edible flowers, and herbs this year, but the farm is also now hosting a couple of microenterprises, one for vegetables and another for mushrooms.

“Thankfully, we started the farm with food access and food justice in mind,” Meza said. A pandemic relief program led a local agency to ask if Emerald Gardens would contribute to “WIC boxes” for the USDA’s Women, Infants and Children program. “When they approached us to ask if we wanted to participate as a supplier, we said, ‘why don’t we participate as an aggregator?’”

The East Denver Food Hub was born. Meza said it’s giving him and his business partner a vehicle for connecting area farmers with local consumers, especially those in need of food assistance. He says state and federal pandemic relief money gave them the initial means to get started.

“We really want to optimize that as a way to not just view it as a Band-Aid on hunger” but a pathway to what he calls a sustainable food model. In addition to directing fresh produce from growers to both charities and end consumers, he says the East Denver Food Hub has created an infrastructure that will guarantee an initial market to the new farmers he’s hosting on Emerald Gardens land.

“We now have a model for basically jump-starting new farm operations,” he said.

“We really want to right the wrongs of history and ensure equity and dignity for community members that have struggled so much to start their own farm,” Meza added. His mushroom grower is a Dreamer who is still working out his immigration status, and the new vegetable farm is run by an immigrant family from Ghana.

Partly because everybody still has to eat in a pandemic, partly thanks to creativity and the willingness to shake up business as usual, and because the government offered support programs, many produce operations ultimately came through 2020 in solid shape.

“Overall, our growers survived the pandemic, if you will, and had a pretty good year,” Hall said of produce farmers in Georgia. 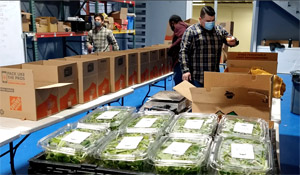 Food gets packed into boxes at the new East Denver Food Hub, founded during the pandemic. (Courtesy: EDFH)

“You’d be surprised at how inventive you can be,” said Rumenik, describing how a packing house in Florida modified its break room with partitions at tables “so you could sit next to somebody with that barrier and still have a conversation with them.”

While some consumer habits forged during the pandemic may revert, such as driving out to a farm to pick up a box of vegetables, others may stick around.

Aerts said shifts to online grocery shopping pose a challenge for the fresh produce sector because shoppers often choose fruits and vegetables based on what they think looks the best, and they like to touch those items. Buying online strips out those sensory inputs.

“We’re going to have to figure out how to make these things more desirable” online, he said.

In Missouri, Graznak plans to continue designating just one person at her market booth to handle money because the pandemic-inspired change turned out to be “a good little discovery that happened for me.”

Meza said 2020 began, pre-pandemic, with one of Emerald Gardens’ key grocery partners filing for bankruptcy. So his business was already struggling when the pandemic hit. Now, things are looking up.

“We got creative,” Meza said. “We realized that the problem also incubated its own solution.”