President Joe Biden gave a shout-out to cover crops in his first address to Congress as he pitched his spending plans for climate and infrastructure.

Biden received applause as he ticked off the benefits of his $2.7 billion American Jobs Plan, and said this: "Farmers planting cover crops, so they can reduce the carbon dioxide in the air and get paid for doing it.” The plan includes $1 billion for farm conservation

He also insisted that his tax proposals will only affect the corporations and rich people. “What I’ve proposed is fair. It’s fiscally responsible.”

Immigration reform got a mention, too. He noted that his immigration proposal provides “a pathway to citizenship for farmworkers who put food on our tables.”

Biden’s proposal to impose capital gains on assets transferred to heirs is getting some expected pushback from farm groups.

Pat Wolff, who follows tax policy for the American Farm Bureau Federation, said the $1 million-per-person exemption from the tax is inadequate for agriculture and that Biden’s promised protections for farms will likely be complicated and costly to use.

Danielle Beck of the National Cattlemen’s Beef Association said her group will hold “members of Congress accountable for legislation that will not adversely impact the viability of farm and ranch businesses, or the next generation's ability to continue to sustainably produce an abundant food supply.”

Take note: USDA released a brief analysis of Biden’s plan that says it would defer any tax liability on family farms “as long as the farm remains family-owned and operated." USDA also says assets subject to the $1 million-per-person exemption would continue to receive a step-up in basis when sold.

Only 2% of farms would owe any tax, and that would be on non-farm assets, USDA said.

Two of D.C.’s best minds on ag policy say an upcoming infrastructure bill is likely to be critical for getting a big increase in conservation program funding for climate-friendly farming practices.

“I don’t think anybody should live under the illusion that there are going to be new dollars available when we’re writing the 2023 farm bill,” Randy Russell, a lobbyist who represents the Food and Agriculture Climate Alliance, told members of the North American Agricultural Journalists.

Ferd Hoefner, a consultant who was the long-time policy director for the National Sustainable Agriculture Coalition, says farm groups need to coalesce behind the effort: “This is the year, this is the time, this is the place, this is the bill.”

Why it matters: Advocates say the conservation program funding is needed to help farmers cover the cost of changing their practices as well as compensating farmers who can’t participate in carbon markets for one reason or another. 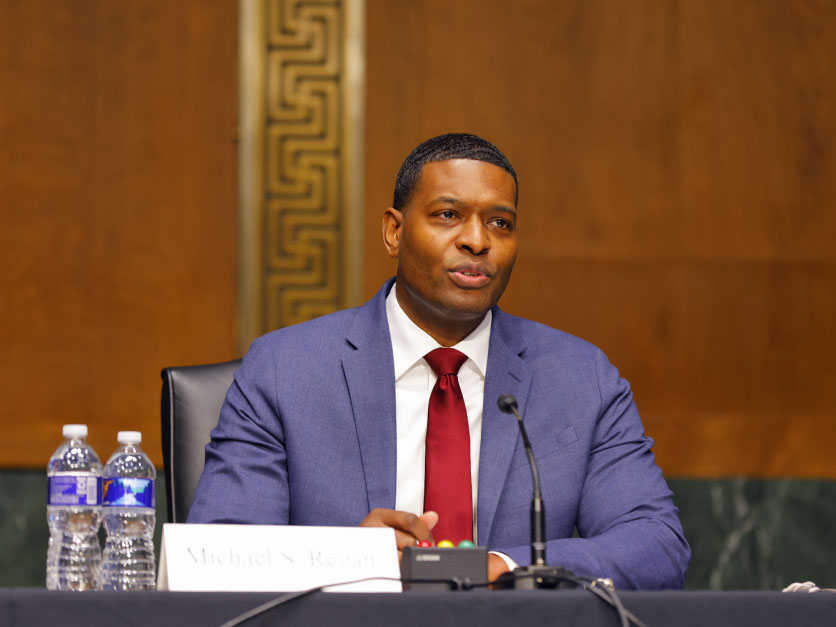 EPA Administrator Michael Regan says there needs to be some permanence to the Biden administration’s upcoming rewrite of the Waters of the U.S. rule.

It will be the third attempt to write a lasting WOTUS rule in as many presidencies. Speaking to the Senate Environment and Public Works Committee Wednesday, Regan said he hopes to bring the ag community into the discussion on “what’s the best way to move forward without ping-ponging back and forth, protecting our water quality, and not overburdening our farmers.”

Regan previously said the Biden administration wouldn’t bring back the Obama rule, which expanded the number of wetlands and other features subject to regulation under the Clean Water Act. But he said Wednesday the Trump administration’s WOTUS rewrite was not “as protective of water quality as it could be.”

Take note: He said he did not want to “prejudge the outcome without an earnest engagement with our ag community.”

Read here for more about what he told the committee.

Top trade officials from the U.S., Mexico and Canada will convene “in the next few weeks” to review complaints that have been made under the three countries’ new trade agreement, U.S. Trade Representative Katherine Tai said Wednesday.

Tai called it a meeting “to review performance and take care of the agreement.” She said she will bring up complaints such as Mexico’s proposed ban of glyphosate and Canada’s alleged misuse of the dairy quotas it agreed to in the U.S.-Mexico-Canada Agreement.

The Biden administration will discuss next steps after the meeting if the U.S. complaints are not adequately addressed at the meeting, Tai told a Senate Appropriations subcommittee.

Read more about the hearing here.

A senior House Democrat says he’s trying to shed more light on hunger in America by moving conversations beyond the Agriculture Committee to other panels.

Rep. Jim McGovern, who chairs the House Rules Committee, on Wednesday hosted the first of a series of hearings on hunger. McGovern, who also sits on the Ag Committee, says Congress and the White House should address the problem more broadly than they have been.

“We talk about little bits and pieces, but not the whole picture,” McGovern said. He says nutrition programs get little attention except when the farm bill is being reauthorized.

Millions of participants in Women, Infants and Children programs throughout the nation and its territories will soon have an opportunity to buy more fruits and vegetables under a provision included in the American Rescue Plan now being implemented by USDA.

Under the ARP, states have the option of increasing the value of a voucher used to buy produce from $9 per child and $11 for pregnant, postpartum, and breastfeeding women, to $35. The relief, funded with $490 million in the ARP, is available for four months.

He said it. “I can assure you that Michael S. Regan is in charge at EPA.” – EPA Administrator Michael Regan, responding to questions from Sen. Dan Sullivan, R-Alaska, on a New York Times article about White House climate adviser Gina McCarthy’s role in environmental policy across the Biden administration.