California farmers grow the vast majority of lettuce for the country, though in recent years the number of acres planted has declined and the salad staple has dropped from consistently the number 2 crop in California (by value) at the start of the century to number 5 in 2018 and 2019.

Changing consumer taste, increased costs for labor and food safety programs, and the limited amount of field work that can be automated have contributed to decreased lettuce production in recent years. California growers planted 106,000 acres of lettuce in 2016 and about 80,000 acres in 2018, 2019 and 2020 (though 2020 growing decisions were impacted by the pandemic). The next largest lettuce-growing state is Arizona, which is also seeing a decline. After growing 39,500 acres in 2017, the total decreased by about a thousand acres annually until 2020, when the plantings dropped to 34,000 (again, likely due in part to the pandemic).

“Our particular acreage on iceberg lettuce and romaine lettuce has been going down slightly every year,” said Steve Brazeel of SunTerra Produce, which grows lettuce in the Salinas Valley on the Central California coast and in the desert region of the Imperial Valley. He said as consumers turn more toward more exotic leafy greens, he’s planted melons on some of those lettuce acres. But he adds that while overall acreage is down, lettuce production per acre is up. After a recent visit to fields in Salinas, Brazeel said the crop looks terrific. Unfortunately, demand does not.

“Things don’t look great for leafy greens this summer,” he said, “as far as the market’s concerned.” He attributes that in part to the very gradual reopening of restaurants and other food service settings.

“I wish I had better news,” Dan Sutton, general manager of Pismo Oceano Vegetable Exchange, said about his outlook for leafy greens this year. But with plenty of supply, prices are trending “a little lower” than he’d like.

Food-borne illness outbreaks in romaine lettuce and spinach that were large enough to attract widespread consumer attention and even a warning against eating romaine in Nov. 2019, have prompted heightened attention to every possible source of contamination.

Sutton, who also chairs the California Leafy Greens Marketing Association (LGMA), says determining where to plant which crops now includes an evaluation of food safety risks. “Putting that thought at the very first step of where we’re choosing to plant leafy greens is a significant part of our food safety” progam, he said. He employs two people focused full time on food safety.

The LGMA is a membership organization that obliges its members to comply with specific, audit-able food safety practices. Industry leaders organized it in response to an illness outbreak linked to spinach in 2006.

“The industry was looking for a way to quickly put in common food safety practices that were standardized,” said Tim York, LGMA CEO. He said even with implementation of buffer zones between leafy greens fields and animal operations and other measures such as pre-harvest testing, the risk remains. A recent FDA report about a 2020 outbreak of E. coli linked to the Salinas Valley noted the pathogen “appears to be a reasonably foreseeable hazard in the California Central Coast leafy greens growing region,” which York said “put the industry on notice that we should know that it’s there.” That has redoubled interest in doing everything possible to protect crops from it, though York said how a specific farm addresses the concern depends on several factors including the number of food safety personnel on staff, how the farm has evolved from a food safety standpoint and how readily the farm will be able to implement any changes. 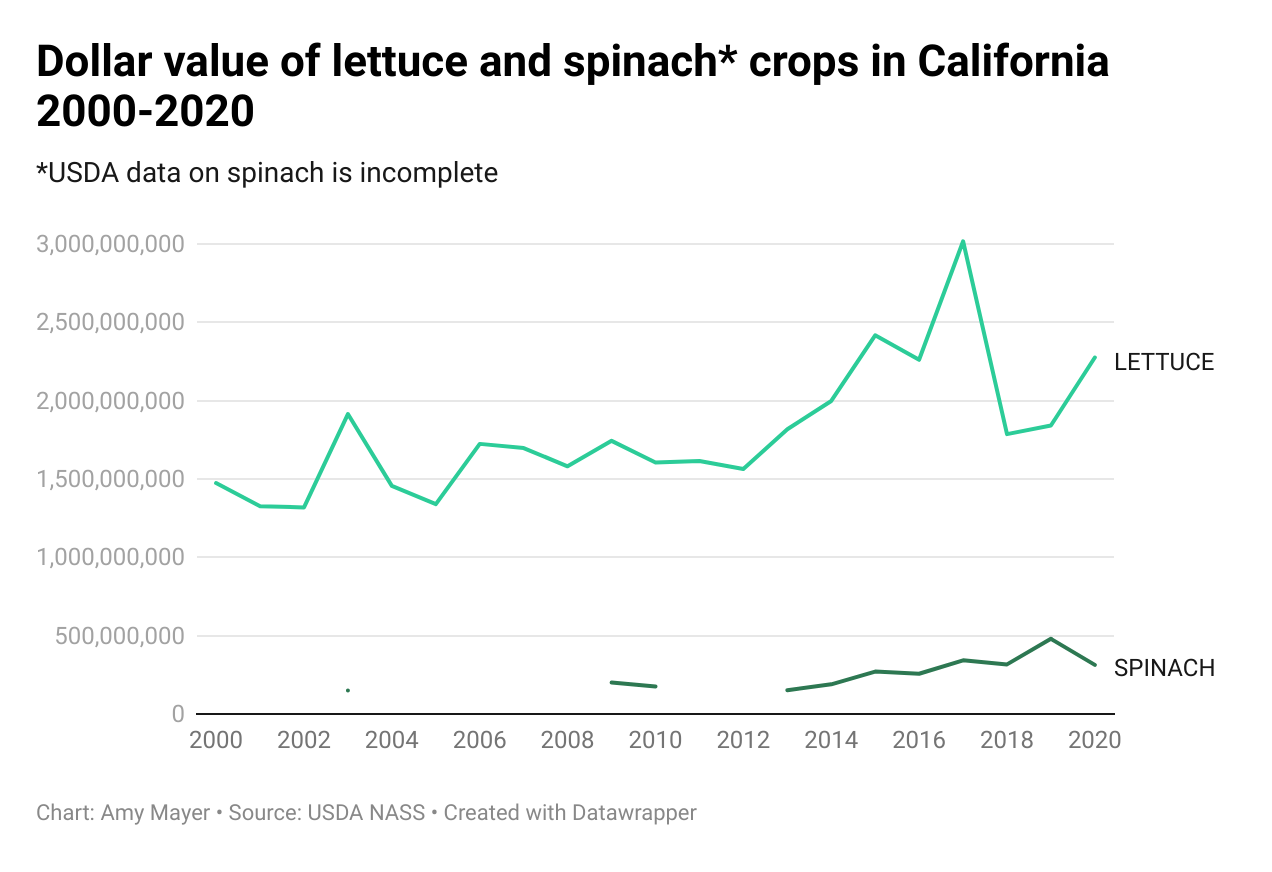 As an example, he described one large operation that invested $1 million into pre-harvest pathogen testing for all of its crops. “That’s quite an expensive proposition,” he said, recognizing the cost would make it impossible for many farms.

Norm Groot, executive director of the Monterey County Farm Bureau, said improving food safety from the field is a “very iterative” process. “As new science and new research comes to light, then that obviously makes for some necessary changes.”

Brazeel said as SunTerra rolled out additional food safety precautions, it did so across all crops and incorporated the costs as just another part of doing business. Now, food safety permeates the operation and the attention “creates more conscientious team members all along the way.”

Another challenge for California’s Salinas Valley lettuce growers is a plant virus spread by a tiny insect call the western flower thrips. It can carry impatiens necrotic spot virus (INSV), which at its worst late in the season can cause so much damage in a field that an entire lettuce crop is plowed under. So far, it has not been a major problem farther south on the coast nor in the Imperial Valley.

USDA Agricultural Research Service entomologist Daniel Hasegawa says public and private sector researchers are looking for ways to confer resistance to the bug in lettuce. He says while there are some pesticides that can quell it, not all are labeled for use on leafy greens in California. Even when chemicals are used, it can be very tricky to apply enough deep into the hearts of lettuce plants to be effective. He said weed management including on areas adjacent to crop fields is very important to minimize the thrips population. Collaborations with railroads and the state transportation department aim to reduce thrips-friendly plants on non-ag land and growers are doing plenty of experimenting on their own, too.

“They’re at a point where they’re willing to try a lot of different things themselves,” Hasegawa said.

Disease outbreaks and increased food safety measures add cost and now Walmart has announced it will only source produce from suppliers that “adopt integrated pest management practices, as verified by a third-party, by 2025” and will be  “encouraging fresh produce suppliers to phase out use of chlorpyrifos and nitroguanidine neonicotinoids pesticides.” These corporate sustainability goals could mean more costly changes on the horizon for growers.

“When I hear the word ‘encourage’ from someone like Walmart,” Sutton said, “my ears hear something more than encouragement.”