A recent closed-door meeting of beef producers may have yielded the rarest of all things in the industry: unity.

In a sector known for its infighting and public mudslinging, six groups were able to produce a list of action items that will be circulated among their own organizations for refinement and future consideration. Those in the room for the conversation tell Agri-Pulse a frank, honest dialogue ensued about issues facing the industry, something that has been elusive.

“It was refreshing because there was no great amount of trust between the different parties going into the meeting, but after we spent a day talking with each other … we’re all just ranchers,” Brett Crosby, who attended the meeting for the U.S. Cattlemen’s Association, said in an interview.

“We all just want to survive and make a living, and just because we have different opinions on what will help us survive doesn’t really change the fact that having ranching and cattle in common makes us all very much alike,” he added.

The group left Phoenix on May 10 after a wide-ranging chat on issues ranging from price transparency and concentration in the packing sector to enforcement of the Packers and Stockyards Act and increasing processing capacity across the county. In an industry known for its fiercely independent cowboys, Capitol Hill lawmakers and staffers have grown frustrated at the simultaneous calls for reform and lack of consensus on how to achieve it.

The industry is facing the aftermath of a pair of so-called “black swan” events, occurrences that sent shock waves through all corners of the beef value chain — a 2019 fire at a Kansas packing plant and the reverberations throughout 2020 of the COVID-19 pandemic. Both had highly disparate impacts on cash cattle prices, but producers argued — especially in the wake of the virus — that packers did not feel a similar monetary impact and called for greater market transparency as the spread between what producers were paid and what consumers were charged grew.

The Department of Agriculture looked into the matter and produced a July 2020 report that called for legislative attention to address price volatility in the industry but stopped short of identifying any packer wrongdoing stemming from either the plant fire or the pandemic.

In addition to USCA, members representing the American Farm Bureau Federation, National Cattlemen’s Beef Association, National Farmers Union, R-CALF USA, and the Livestock Marketing Association were also in attendance. The meeting was called at the request of LMA, which represents not necessarily livestock producers, but rather the local auction markets where thousands of the nation’s beef cattle are sold.

“What was really unique and in some ways pretty historic was the groups that don’t necessarily always agree to work together being willing to put things aside, sit down in one room and have a good, constructive conversation,” LMA’s Chelsea Good told Agri-Pulse.

Among the action items stemming from the meeting are expedited renewal of USDA’s Livestock Mandatory Reporting (LMR) — currently set to expire in September — as well as the creation of a contract library and equal treatment of formula and cash transactions, developing new local and regional processing capacity, and calling for an update from the Department of Justice on an investigation into the so-called “big four” beef packers.

The latter point got a boost from Capitol Hill Monday when a bicameral group of 16 Republicans called on DOJ to “request that DOJ provide Congress updates on any investigations or ongoing vigilance.” The letter, led by Sen. John Thune and Rep. Dusty Johnson of South Dakota, said there have been “no public results from the investigation” since DOJ sent civil investigative demands to meatpackers nearly a year ago and “there is no information to even suggest whether the investigation has concluded or is still ongoing.”

Such an update from DOJ would be highly unusual for an agency that rarely comments on ongoing investigations outside of the context of court filings. But Sen. Chuck Grassley, an Iowa Republican who signed the letter and is the top GOP member on the Senate Judiciary Committee, said it’s time for an update. 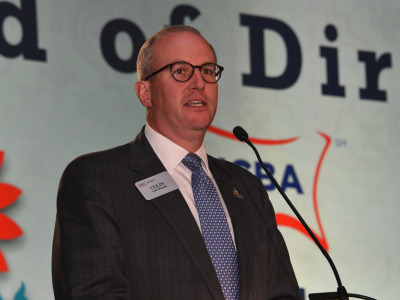 “They ought to be able to give us some general comment without getting too specific,” Grassley told reporters Tuesday. “We don’t know what they’ll tell us, but it doesn’t hurt for us to ask, and after a year, I think I want to know what’s going on.”

NCBA cheered the letter, with head lobbyist Ethan Lane saying in a statement the group hopes the Capitol Hill outreach “will be met at DOJ with the urgency it warrants, and we hope to see results from the Attorney General soon.” Colin Woodall, the organization’s CEO tells Agri-Pulse DOJ has spoken to “a lot of our members at many different levels within the chain” throughout last summer, fall and winter.

“So we know that the Department of Justice has been acting on this,” he said. “That’s why we just want it to get concluded so we can all take the next steps and know what they found.”

DOJ did not respond to an Agri-Pulse inquiry.

Notably absent from the conversation and corresponding joint statement was representation from the nation’s beef packers. While the initial plan was to keep this chat at the producer level — organizational staff for the involved groups was not included — some said they weren’t opposed to bringing processors into the conversation once some finer points were worked out.

For its part, the North American Meat Institute says it is willing to work with the producer groups “to ensure proposed changes to the beef markets do not have unintended consequences for producers and consumers,” a spokesperson said. The group also argued a chief concern currently facing beef packers — issues in the stability of its labor supply — would also “challenge new small and medium-sized facilities entering the market.”

“Meat and poultry companies are utilizing capacity to the best of their abilities with COVID protocol constraints still in place and despite significant labor challenges that existed prior to — and have been exacerbated by — COVID,” the spokesperson noted.

The groups will now take the points discussed at the meeting back to their respective organizations for further discussion and refining of individual policy points. For AFBF, the current action items already fit within existing organization policy, according to Zippy Duvall, the group’s president and an attendee of the meeting.

In the event the groups are able to able to reach consensus before LMR reauthorization this fall, that could serve as a potential legislative vehicle for some of the changes. But that would require uniform support from an industry that struggles to provide it, and a timely reauthorization is going to be paramount, sources tell Agri-Pulse.

“That’s a piece that could carry something; I think that’s to be discovered,” Duvall said. “The way that meeting went the other day, I think all the parties were willing to have that conversation and continue it.”

Keeping consensus will also require the groups to stick to areas of agreement, something that could prove difficult with hot-button issues like checkoff reform and country-of-origin labeling on the sidelines of the discussion. Woodall said the group is “going to do everything we can to achieve all three” action items, including moving some or all of them by legislative means.

“This isn’t going to completely fix the issue. I think it goes a long way in helping us, but we still haven’t found that silver bullet,” he said. “I don’t know what the silver bullet is, we’re going to continue to look for it, but we still haven’t found that one (solution) that completely changes everything, but all of these help us … hopefully take some of that leverage away from the packers and return it to the producers.”

The group did not set a date for a follow-up meeting, but USCA’s Crosby hopes to see one happen.

“We absolutely have to go forward. Even though we came up with some action items, there’s still a lot left to cover in terms of concerns,” he said. “We want to put structure around the action items that we outlined, but we also want to address the rest of those concerns.”