Conventional corn ethanol and other biofuels could qualify for a new clean fuel production tax credit being advanced by Senate Democrats, but the products will have to meet increasingly tougher standards for reducing greenhouse gas emissions over the next decade.

The tax credit is a featured part of a $216 billion climate-focused package of tax incentives, called the Clean Energy for America Act, that the Senate Finance Committee is scheduled to debate Wednesday afternoon even as Democrats seek to shape a larger climate and infrastructure package.

Fuels that are domestically produced and consumed could qualify for a credit worth up to $1 per gallon based on their carbon emissions. Fuels would have to have emissions at least 25% below the current national average until 2030, when eligible fuels would have to be at or near zero emissions.

The tax credit, which would cost an estimated $20.2 billion, would be adjusted based on inflation and remain in effect until emissions from transportation have been reduced to no more than 25% of current levels.

The Department of Treasury, Department of Energy, and Environmental Protection Agency would work in consultation with each other on calculating the credit rates regarding greenhouse gas emissions, according to the bill.

The tax credit would ultimately replace a mix of temporary and expired tax incentives for alternative fuels, including natural gas and propane, hydrogen, cellulosic biofuels, and biodiesel.

“It’s a hodgepodge of credits from yesteryear that don’t effectively move us toward the goals of reducing carbon emissions, creating clean energy jobs or lowering electricity bills for American families,” Wyden said in a statement. 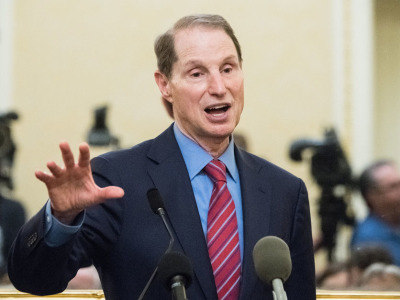 Jarrett Whistance, a biofuel economist at the University of Missouri, said the tax credit would operate similarly to California’s low carbon fuel standard in that the incentive is tied to more stringent greenhouse gas reductions over time.

“To get the maximum value of the credit, producers would need to show improvements in their emissions rating over time,” he said.

Citing data from California’s Air Resources Board, he said the average carbon-intensity of ethanol used to meet the LCFS “has improved steadily, and this proposal could give them an additional incentive to continue that trend.”

Under the legislation, fuels produced before 2026 could qualify for the credit if their emissions are less than 75 kilograms of carbon dioxide equivalent per million BTUs. That limit would be reduced to 50 kilograms for 2026 and 2027 and 25 kilograms for 2028 and 2029. In 2030, emissions would have to be at or near zero.

Ed Hubbard, vice president of government affairs for the Renewable Fuels Association, welcomed the proposal. “We no longer have to deal with year-end extenders, which provide no certainty, no consistency, and don’t drive investment,” he told Agri-Pulse.

According to a USDA analysis, emissions from conventional ethanol are 43% lower than they are for gasoline.

Tristan Brown, associate professor at the State University of New York, said the challenge for the industry with the tax credit would be how carbon reductions would be assessed.

The government will have "to determine the best methodology out there for quantifying the carbon intensity reductions of these biofuels and how you deal with these trickier issues involving indirect land-use change.”

An earlier Wyden proposal said EPA would be responsible for determining that model. However, Hubbard thinks the best approach is to use the Department of Energy’s Greenhouse gases, Regulated Emissions, and Energy uses in Technologies, or GREET, model. The model “simulates the energy use and emissions output of various vehicle and fuel combinations,” according to DOE.

The bill aims to phase out the existing alternative fuel tax credits by 2023, but Kurt Kovarik, vice president of federal affairs at the National Biodiesel Board, questioned how reasonable that timeline would be. He said he is not convinced the government can move that quickly and maintain the industry's confidence.

Senate Finance Committee member, Sen. Chuck Grassley R-Iowa, told reporters Tuesday there’s “a lot of questions about the workability of Wyden’s bigger bill,” but Grassley stopped short of saying what those questions were.

Separately, Grassley and Sen. Maria Cantwell, D-Wash., introduced a bill extending the biodiesel credit to 2025. It is set to expire in 2022, after being revived in 2019. Rep. Cindy Axne, D-Iowa, and Rep. Mike Kelly, R-Pa., introduced a version of the bill in the House.