The Agriculture Department’s seven-year-old network of regional climate hubs will play a key role as USDA seeks to bolster climate research and get farmers and ranchers to employ that research to adapt to the impacts of climate change.

The network of ten hubs doesn't get a lot of money — the latest budget request, for fiscal year 2022, includes $23 million in direct funding, just $3 million above the current-year level — but they are in a unique position to disseminate information to producers because they are located at land-grant universities and can leverage partnerships with those universities and state agencies.

USDA, however, also has proposed another $17 million in fiscal 2022 for “hub-like” work, a spokesperson says, including “education, outreach, and extension; tool and technology exchange; and the synthesis of information.”

The work funded by the $17 million will be done outside of the climate hubs but will provide snow and climate monitoring through USDA's Natural Resources Conservation Service ($7M); urban ag education and outreach, also through NRCS ($8M); and funds to the Risk Management Agency “for research, review and to ensure actuarial soundness of new products addressing climate change ($2M),” the spokesperson said.

“I think they swing above their weight for a relatively small program, and they get a lot of attention,” says Bill Hohenstein, director of USDA’s Office of Energy and Environmental Policy in the Office of the Chief Economist. “So we're really proud of the work that that program has done over the last five years.” 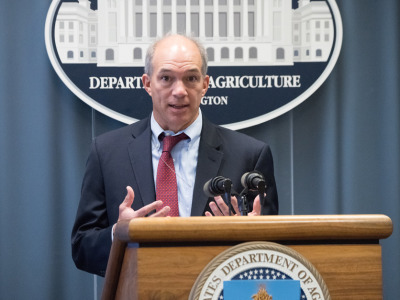 Launched in 2014, the hubs flew under the radar during the last administration when funding, Hohenstein said, was “level.” Now, however, there is likely to be more attention paid to the work the typically three-person offices perform.

“Climate change is a priority for the administration,” Hohenstein said. “And that is going to have implications across the department.”

“Hubs play a unique role in connecting research to programs to helping us build a climate-literate staff, so we can share the information on how to be more resilient, and how to address climate change, with the public but especially producers — farmers, ranchers, forest landowners, the folks that manage infrastructure in rural communities, the whole range of folks who are vulnerable to climate change,” he said.

The hubs’ job is “taking the science, making sense of it, and making it usable, so the folks we have working with farmers can integrate that,” Hohenstein told Agri-Pulse.

“A lot of what the hubs will be doing is working to build that capacity in both our field staff, and the folks in the private sector like crop consultants, and folks at the state level, university-based extension — all the people that actually do outreach to farmers and ranchers — basically working with them to make sure they have the information they need.” 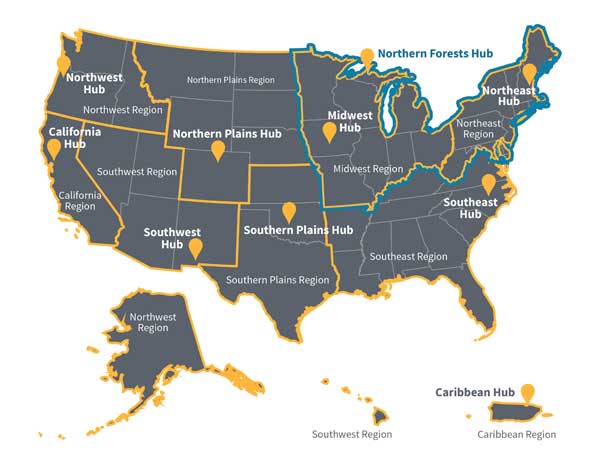 USDA’s just-released Climate-Smart Agriculture and Forestry Strategy emphasizes the role of the hubs.

In support of the strategy, the hubs “should continue to lower barriers and increase the rate of adoption of CSAF practices,” the strategy says. “They should also help identify opportunities for collaboration with partners to develop necessary innovations or curate tools and technologies to moderate stressors.

At the Midwest Climate Hub, that can mean looking at new crops that might perform well in scenarios such as drought or increased precipitation, said director Dennis Todey.

“We're not going to get to the point anytime soon of a large-scale change out of corn and soybeans, but, you know, if you have some marginal land, maybe you don't grow corn,” he said. “Maybe there's a cash crop of some kind that you can use that is better for that land area and can still create some profit off that.”

One example, he says, is the potential of reintroducing nut trees, which would provide both nuts as a cash crop and shaded grass for livestock. “We're not going to grow chestnuts everywhere, but getting people to think of these different ideas” is important, he said.

Todey said that one event put on by the Midwest hub has clearly been well-received: a monthly call, usually with a state climatologist from the region and co-hosted by a scientist from the National Oceanic and Atmospheric Administration, on weather conditions faced by producers in the region.

“We've seen a pretty steady increase in attendance,” Todey said, along with positive comments from attendees. “People are saying it’s really helpful to know what's going on and what things are coming,” he said.

In the Northeast, Joshua Faulkner, farming and climate change program coordinator at the University of Vermont’s Extension Center for Sustainable Agriculture, points to a series of videos produced with grant money from the hub, featuring farmers talking about practices they’ve undertaken to adapt to changing conditions.

"One farmer actually gave nitty-gritty details on what his seeding mix was, and pounds per acre for specific cover crops,” Faulkner said. “That’s really educational for farmers, down to the nuts and bolts.” 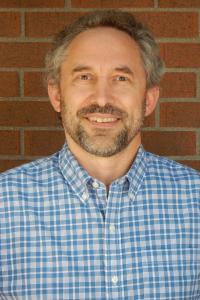 In California, the hub has been working on the impacts of climate change and wildfire. For example, some specialty crops require a certain amount of chilly temperatures to break dormancy. A USDA fact sheet on the subject says “adaptation efforts may be necessary for California to continue cultivating high-chill crops like walnuts, pistachios, or cherries.”

California hub director Steven Ostoja says the hub also is working with research partners to “sleuth out” the impact of “smoke taint” on wine grapes in the state, which the Risk Management Agency estimates may have hit as many as 30,000 acres of California wine grapes in 2020.

Ostoja mentions, in particular, a project called GRAPEX, for “Grape Remote sensing Atmospheric Profile & Evapotranspiration experiment.” The initiative's mission is “to refine and apply a multi-scale remote sensing evapotranspiration (ET) tool kit for mapping crop water use and crop stress for improved irrigation scheduling and water management in vineyards in the Central Valley of California, a region of endemic periodic drought.”

Although the work focuses mainly on vineyards, “the improved tools will also have applications to fruit and nut orchards and other crops with highly-structured canopies,” according to the project’s website.

Annual heat waves are another concern, Ostoja said, as “they really can stress the physiologic processes of a lot of our perennials, and in some cases, annual cropping systems.”

Water management is another important area, he says, so applications are “well-timed, and on point.”

Looking to the future, Ostoja said, “We have disadvantaged communities scattered across California, and a lot of that is superimposed on some of our highest producing agricultural counties in the state. And there are a lot of concerns about equity and environmental justice that we just haven't had the resources to address. Should we see increases [in resources], I think that's one of the places we would look at.”