Following the lead of former President Donald Trump, the Biden administration is looking to carry out policy priorities and pour billions of dollars into the farm economy without having to go to Congress to get directions on how to spend the money.

The key is the Agriculture Department’s broad legal authority, which dates back to the Great Depression, to use its Commodity Credit Corp. account to support farm income, protect the environment and develop new markets.

“The CCC resources can be used to fund this effort, and if they are used, they will be used at a significant level that will allow us to accomplish the purpose of this initiative without compromising CCC’s other important role to support farm bill programs and emergency needs as they arise,” Vilsack said in a speech at Colorado State University.

For farm groups, the CCC provides a rich source of funding to address concerns outside the farm bill. Ag groups lobbied for increasing the CCC’s spending limit in 2020, and the Food and Agriculture Climate Alliance, a coalition that includes many of the largest farm organizations, has called for using the CCC to assist farmers in addressing climate change.

The top Republican on the Senate Agriculture Committee, Arkansas Sen. John Boozman, told Agri-Pulse on Tuesday that he wanted to see more details on Vilsack’s planned use of the CCC for climate-related projects.

“My first goal there is that whatever we do is producer-driven. That's so so very important,” he said.

He added, “We will be supportive … as long as it's producer-driven” and steers clear of imposing any mandates on farmers.

The CCC is something of a revolving account from which USDA can borrow up to $30 billion a year. Congress annually reimburses whatever amount the department spends from the fund.

Before Trump, recent administrations had largely used the account for dispensing commodity and conservation program payments, extending farm loans and providing relatively limited amounts of disaster assistance or other aid.

From fiscal 2007 through fiscal 2018, spending from the CCC exceeded $15 billion once, in 2016, according to an analysis by the Congressional Research Service.

Then, Trump authorized the use of CCC to compensate producers for the impact of his trade war in China, effectively using CCC as a political counterweight to China's retaliatory tariffs through the direct payments offered under the Market Facilitation Program. The Trump administration also relied heavily on CCC again when the COVID-19 pandemic struck in 2020 and the Coronavirus Food Assistance Program was unveiled. CCC spending topped $27 billion in FY19 and exceeded $40 billion in FY20. (Congress provided a special, $14 billion appropriation to the CCC at the outset of the pandemic to enable USDA to exceed the $30 billion borrowing limit.)

USDA hasn’t provided an accounting of its CCC spending for FY21, which ended last Thursday, but earlier this year the department estimated that Congress would need to reimburse the fund for about $26 billion.

Trump’s heavy spending from the CCC went off with “almost no criticism. I’m sure that message wasn’t lost on Secretary Vilsack,” said Joe Glauber, who served as USDA’s chief economist from 2008 to 2014. What congressional criticism there was of Trump's CCC-funded initiatives was focused primarily on how the programs were structured rather than his use of the CCC to pay for them.

As a testament to USDA’s expansive authority under the CCC Charter Act, the late House Appropriations Chairman Jamie Whitten, D-Miss., once said that “nobody needed anything but CCC to provide any assistance a farmer might need,” according to Bill O’Conner, a longtime GOP aide to the House Agriculture Committee.

“USDA has justified some rare and unusual things with CCC funds, (but) they have all centered around direct assistance to farmers,” O’Conner said.

Congressional Republicans imposed restrictions on the account after Vilsack, who served all eight years of President Barack Obama’s administration, tapped the CCC to provide disaster assistance to farmers in Arkansas ahead of the 2010 congressional elections. At the time, then-Senate Agriculture Committee Chairwoman Blanche Lincoln, D-Ark., was unsuccessfully running for reelection against Boozman, then a member of the House of Representatives. 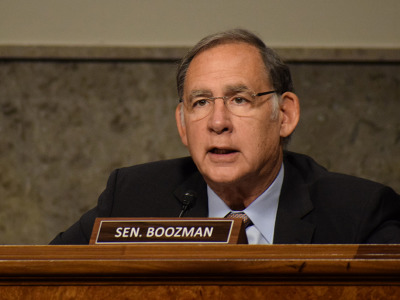 The restrictions weren’t lifted by Congress until 2018, when Trump was launching his trade war with China.

Despite the restrictions, Vilsack still managed to use the CCC for some novel purposes, both of which had support among many lawmakers: To promote the usage of higher blends of fuel ethanol, he tapped the account in 2015 to provide $100 million to subsidize blender pumps.

In 2016, he provided $327 million in payments to cotton producers in lieu of declaring cottonseed eligible for farm bill programs, something he said he couldn’t do legally.

As a practical matter, the $30 billion cap will limit the size and duration of the Biden administration’s climate-related spending. USDA must manage the fund to ensure it has enough money to cover payments that need to be made to farmers; payments under farm bill commodity programs rise and fall depending on commodity prices and production.

Vilsack provided no estimate of how much he might use in CCC funding for climate projects, but he made clear in his speech that he wasn’t proposing to use the CCC to set up a carbon bank that would buy and sell carbon credits, an idea that has drawn sharp criticism from Republicans on the House and Senate Ag committees.

Creating a long-term program to pay farmers for reducing greenhouse gas emissions would be hard to do, given the $30 billion cap on the account and the variability in funding needed for farm bill programs and disaster assistance, said Glauber.

But one-off expenditures for projects such as installing methane digesters on livestock operations “or putting GHG-reducing technologies in place would not necessarily entail a long-term commitment of funds,” Glauber noted.

A former congressional aide said it remains to be seen whether lawmakers will try to reimpose some restrictions on the CCC down the road.

“It all comes down to whether the Ag committees want to reclaim the driver’s seat. …. It’s so hard for them to get stuff done in a farm bill, that these other pathways have seemingly been given a pass,” the former aide said.