New pipelines aimed at capturing carbon from ethanol, fertilizer, and other industrial plants may soon snake across the Midwest as companies look to profit from helping those facilities lower their greenhouse gas emissions.

Projects like this offer twin benefits to ethanol facilities: Valero and any other supplier of CO2 to the pipeline project can claim a 45Q tax credit, which is worth $50 a metric ton for carbon that is permanently stored. Plus, sequestering the carbon dioxide from ethanol production means that the carbon rating of the ethanol itself is lower, making it easier to qualify for low-carbon fuel standards, such as the policy in California.

Navigator's proposed system, estimated to cost more than $2 billion, would transport liquefied CO2 from industrial plants to a sequestration site in Illinois where it would be injected into the ground.

The pipeline would have an injection capacity of 8 million to 12 million metric tons of carbon each year, Navigator CO2 Ventures Matt Vining said. Running at full capacity, the system will be able to capture and store enough CO2 equal to removing roughly 2.6 million cars from the road per year or planting 550 million trees annually, the company says.

“We’ve just been a little bit blown away by the level of enthusiasm within ag, broadly defined both liquid fuels and on the ammonia fertilizer side,” Vining told Agri-Pulse.

Navigator CO2 Ventures still needs to get permits for the project. Vining expects it will take two years to permit the project and another two years to build it, with a completion date in late 2024. 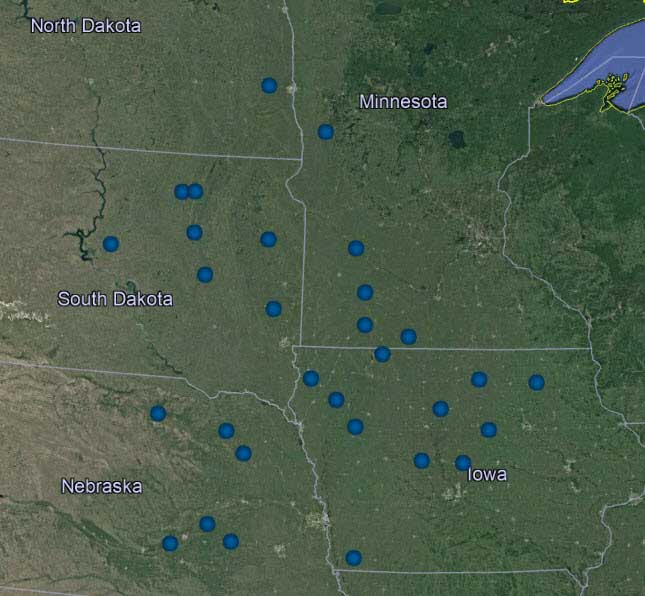 Facilities that have signed agreements with Summit Carbon Solutions

According to the International Energy Agency, carbon capture and storage projects could reduce global CO2 emissions by almost one-fifth and lower the cost of addressing climate change by 70%, Navigator says.

Other pipeline projects are in the works, too.

An Iowa-based group, Summit Carbon Solutions, a subsidiary of Summit Ag Investors, is proposing a roughly $4.5 billion project, which would sequester a minimum of 10 million metric tons of carbon per year from ethanol plants in Iowa, Minnesota, Nebraska, South Dakota and North Dakota (pictured).

On May 25, investment firms Battelle and Catahoula Resources announced plans to construct low-cost CCS projects to transport and sequester carbon from ethanol plants in Nebraska.

Pending regulatory approval, the company hopes to complete the project in the first half of 2024, Kirchhoff said. By sequestering carbon, Kirchhoff said ethanol plants would be able to lower their carbon footprint by roughly 50%. That would allow them to reach low-carbon markets to receive a premium for fuel they sell.

“We believe this is a transformative project because it provides ethanol the ability to be a net neutral carbon fuel. We think that can compete incredibly well in the low carbon fuel world going forward and increase the vitality of the ethanol industry,” Kirchhoff said.

Approximately 30 ethanol plants have signed long-term agreements so far, but he said there is also potential for fertilizer and power plants to become suppliers.

In February, Green Plains Inc. announced that three of its biorefineries would enter into a long-term off-take agreement with Summit Carbon Solutions.

Sen. John Hoeven, R-N.D. is pleased with Summit’s proposed pipeline. “Major investments like this don’t just happen — it took the right legal framework, as well as regulatory and tax certainty,” he said in February.

North Dakota, an ag state as well as a producer of coal and oil, has been leading the way on carbon capture utilization, Hoeven said. It is “a true path forward for developing all of our nation’s energy resources, supporting both our economic and national security, while improving environmental stewardship," he said.

Rep. Cheri Bustos, D-Ill., and other House Democrats met with Secretary of Energy Jennifer Granholm virtually Monday, and Bustos pushed for the deployment of carbon capture technology to reduce carbon emissions while investing in rural communities.

“We can create jobs, combat the climate crisis and grow our rural economies all at the same time if we invest in carbon capture technology right now,” Bustos said.

She praised Granholm for including a $305 million boost in carbon capture storage and utilization research in the Department of Energy’s Fiscal Year 2022 budget request.

Brad Crabtree, vice president of carbon management at the Great Plains Institute and director of the Carbon Capture Coalition, said for any industry to be viable in the future, it needs to have in place technologies and strategies for deep emissions reductions over time. He said ethanol plants could stand to benefit from these systems.

“Any company that doesn’t have that, may be at risk of losing their access to capital over time. Just having in place the ability to manage that CO2 coming off of fermentation in the biofuels industry is really critical,” he told Agri-Pulse.

Crabtree said there are value-added opportunities for ethanol plants, whether it be through selling food-grade CO2 or selling ethanol into the California market. He said capturing the CO2 directly off fermentation will lower their carbon intensity score for ethanol in California’s Low Carbon Fuel Standard.

“It gives any producer that does carbon capture and exports into the California market, an immediate revenue opportunity through credits from the Low Carbon Fuel Standard,” he said.

California's LCFS, which began operating in 2011, assesses fuels based on their carbon intensity. Oregon and Washington also have LCFS programs, and other states, including Colorado, Minnesota, Utah and New York, are considering them.

Crabtree said financing carbon capture projects will be one of the biggest hurdles. One way to address that is to bring in more CO2 suppliers, including steel and power plants, which produce more CO2 than ethanol plants, he said.

“Even though the costs of capturing the CO2 from an ethanol plant are very low because the CO2 is very pure ... the costs of transporting the CO2 are higher because you have smaller volumes and it's harder to achieve those economies of scale when you see the large cost reductions,” Crabtree said.