North Dakota producer Mike Rott is one of thousands of farmers and ranchers across the western half of the United States struggling with drought this year, and the impact on Rott's crops is evident in field after field.

Rott's wheat is ankle-high this week at a time when, in a good year, it should be knee-high. From the road, the upper leaves of the plants appear green, hiding the brown stems and leaves — the most obvious signs of lack of moisture — below.

The junegrass in his pasture, which can grow to be 10 to 20 inches, is only about 2 to 4 inches tall at its peak month of June. Even his corn and soybeans, which are currently “doing OK” thanks to moisture from small shots of rain, are shorter than they should be.

“Some fields, you can look and you can see right down to the road all the way, and you shouldn't,” Rott, who raises cattle and farms corn, soybeans, wheat, barley and forage with his brother, told Agri-Pulse. “You shouldn't see rows at this stage of the game.”

States in the West and the High Plains are currently facing what Brad Rippey, a USDA meteorologist in the Office of the Chief Economist, calls the “most expansive” drought the U.S. has seen since 2012 and 2013.

“We're looking at now almost a year of drier than normal conditions that sapped, not just topsoil moisture, but subsoil moisture with really dire impacts on rangeland, and pastures, and then eventually winter grains and now spring zone crops,” Rippey said.

The latest U.S. Drought Monitor shows large parts of North Dakota, Idaho, California, Oregon, Arizona, Utah, Colorado and New Mexico are in “exceptional drought,” which means that they are seeing widespread losses in crops and pasture and shortages of water in reservoirs, streams and wells.

Rippey said he expects to see hotter and drier-than-normal weather through the end of the 2021 growing season in the northwestern half of the United States.

“Unfortunately, if anything, for the rest of this 20-21 growing season, it does appear that some of the driest areas may get considerably dryer, if that's even possible,” he said.

Cattle producers in North Dakota and across the West have been hit especially hard. Many are culling herds because of the lack of forage. According to the USDA, approximately 37% of the nation’s hay acreage, 65% of its alfalfa hay acreage, 38% of its cattle inventory and 63% of its milk cow inventory are within areas that are experiencing drought.

Dustin Cox, who ranches in southern Utah and northern Arizona, originally had about 80 cows, but he already sold 10 of his herd and plans to sell another 10 at the beginning of July.

“What we’re up against is if we don’t get any monsoons in Southern Utah and Northern Arizona, we’ll have to sell cows early,” he said. “We’ll have to either feed them, sell them, wean early or a combination of those.”

He’s done the calculations and, if the drought continues as it has, he can make it until September. But if they don’t get rain before then, they’ll be forced to sell off cows, starting with the oldest ones and working their way down the line.

“What I'm kind of prepared for is half of our cow herd gone,” he said. “Being down to 40 cows and being able to afford hay or forage and then the hard, steep climb back up to 80.”

In North Dakota, farmers have to harvest up to four or five acres of grass to get a single bale of hay. Usually, a farmer would get four or five bales out of an acre, said North Dakota Farm Bureau President Daryl Lies.

McHenry County, where Rott farms, is at the heart of North Dakota’s drought. His pasture capacity is half of what it once was and he and his brother already sold 36 cow-calf pairs, some on June 8 and the rest on June 15.

On Monday, ranchers from all over North Dakota gathered inside a big white building in the town of Rugby, located forty-eight miles north of Rott’s farm. Out front, in big bold lettering, a sign reads, “CATTLEMEN PRAYERS R WITH YOU.”

They were at Rugby Livestock Auction hoping to either sell or buy livestock at the auction’s weekly sale. In previous years the business sold only every other week but shifted to more regular sales because of the high numbers of cattle being sold because of the drought. A couple of weeks ago, it held a sale over two days, just to auction off 1,700 feeder cattle and 1,000 cow-calf pairs.

Ron Torgerson, a former auctioneer and employee of Rugby Livestock Auction, says that in normal years, 1,200 to 1,500 cattle would be sold at the sale barn in June. This June, they’ve sold 11,700 cattle to buyers from North Dakota, South Dakota, Iowa, Idaho, Minnesota and even Missouri.

“Some of these guys have built up a good reputation for having some top quality feeder cattle and now they're gone,” Torgerson said. “Mama and baby left the country.”

As the auctioneer took bids over the loudspeakers, he called out information about the cattle and the sellers. Ranchers lined the ring. When one group of Red Angus cows and their calves entered the ring, he said, “You’ve heard the story. It’s plumb dry. That’s why you have the opportunity to buy them.”

Shane Anderson, a rancher from Towner who raises around 350 cows, was one of the producers who, after seeing the impacts of the drought, decided it would be best if he sold off some cattle to conserve his grass and water supply. He brought 63 pairs to the sale.

“I'm slightly overstocked from years past and I mean, the resources weren't there for the cattle,” he said. “So I opted to make these sales decisions and it kind of makes me a little more confident, especially now that we have been getting a little bit of rain, that with moving these animals off my operation, I should have enough resources for the rest of them.” 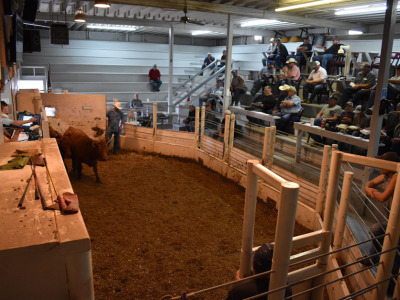 Cattle sold at the Rugby Livestock Auction in North Dakota.

Anderson also sold 40 cow-calf pairs privately and plans to ship them to the owner sometime this week. He said that depending on what the drought looks like later this summer, he may look at selling more or changing the management of his ranch.

“This round of selling cows this spring is the first cut that needs to be made,” he said. “We'll see what the summer brings. It's going to be a week-by-week decision.”

In the Southwest, Cox hasn’t seen any significant moisture for the last 15 months. He said his winter range in Arizona barely got them through the last two winters. He’s thankful he has added pipelines and troughs to his pastures and practiced rotational grazing, because they have helped his operation last through the drought.

Additionally, he has signed up for insurance and has gotten help through USDA's Farm Service Agency. And, now that the drought is forcing producers to sell off their herds, he’s thankful for the advice of “old-timers” in the cattle industry who taught him not to buy more cattle than he could handle.

“The reason why we’re able to stay in business right now is because we didn’t bite off more than we could chew,” he said.

“One thing about a drought is you get some strange weather patterns and you know, that isn't sometimes just lack of rain,” he said. “We've had hugely wild swings in temperature, which makes it difficult for not only your crops, but for livestock too.”

Kerns does have rangeland insurance that helps offset the costs incurred by the drought.

Lies, the North Dakota Farm Bureau president, says the drought is especially hard on producers who depend primarily on cattle for their income. When they are forced to make large cuts to their herds, they lose a large amount of their income.

“It'd be like GM (General Motors) closing half of their factories and expecting to be able to produce next year,” he said. “It isn't going to happen.”

Torgerson isn’t expecting cattle sales to stop, but he worries that it will get harder for ranchers to find buyers.

“Every week we're starting to see a little more weakness in it,” he said, referring to the cattle market. "It's not drastic yet, but we're going to hit a point, I'm afraid, where we have saturated the areas that do have moisture and do have grass, and they won't be able to take any more.”