The  challenge of expanding and refining the use of artificial intelligence to resolve challenges in agriculture is drawing increased state and federal funding to researchers in the San Joaquin Valley.

The AI collaboration is one of eleven members of the National Science Foundation's National Artificial Intelligence Research Institutes. NIFA is helping fund two of the eleven institutes; the second is led by Iowa State University.

Joshua Viers, a civil and environmental engineering professor and associate dean for research at UC Merced, said the new grant shows the school’s growing profile as a place with “an emerging strength in ag food technology.”

“This AgAID institute is one of three recent large awards to UC-Merced in and around what’s called smart farming,” he said.

UC Merced already was a partner in an NSF-funded Engineering Research Center focused on the Internet of Things for Precision Agriculture (IoT4Ag). The governor’s budget sends another $3 million to the university for a new Center for the Future of Agriculture and the office of the president of the UC system, included UC-Merced, in a multi-campus research program called LACA, or  Labor and Automation in California Agriculture, Viers said. The Davis, Berkeley and Riverside campuses are also part of that project.

Viers said these investments align with the Merced campus’s plans to use 40 acres for an experimental smart farm. Taken together, they show that the youngest UC campus has carved out a place for itself, specifically studying sustainability, water resources management and big data solutions to ag problems, he said.

“USDA is just now starting to recognize some of our strengths,” he added.

Because Viers and a colleague had done some research in Washington, they saw that “we both have high-dollar specialty crops that often have high demands for both labor and water.”

Collaborating on AI solutions could benefit both places, even though the specific crops grown are different. The collaboration has three areas of focus.

For labor, the goal is to develop a human workforce that is using new tools, such as AI-informed equipment, so technology improves “not just worker productivity but also worker safety and their operating environment,” he said. More sustainable water management is another focus area, which Viers said might include integrating precision irrigation with climate models, for example, to better determine how much water to allocate. The third focus area is about how climate and ecosystems services research might lead to “more timely and effective forecasting models” that could help protect apple crops in Washington’s Yakima Valley or mitigate drought in the San Joaquin Valley. 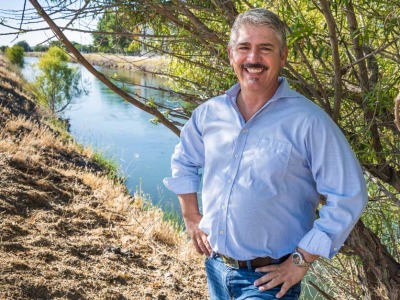 He said Merced students often take a “fresh look at some old problems” and the campus community is uniquely positioned to attract students and researchers from a wide range of backgrounds and life experiences, which can “really translate well into new ideas.”

Tools or technologies developed by the two research centers could be deployed on the new smart farm, Viers said. The mantra “adopt-adapt-amplify” describes the process of figuring out how to make existing technologies better (such as micro-irrigation), how to add something new such as remote sensing, machine learning or autonomous movement, and then making sure the results are “tools that can be readily used," he said.

The AgAID grant will fund graduate student researchers and also provide summer programs and other opportunities for undergraduates.