As funding lags for water infrastructure needs and farmers shoulder heavier regulatory burdens, the state is looking to strategic flooding as a solution for everyone.

Curious what this means for water storage, farmers are increasingly coming to the table. This week, several of them showed up for a two-day public workshop for a program known as Flood-MAR (“managed aquifer recharge”). The state hosted the forum to brainstorm strategies for advancing Flood-MAR to a point where the administration can set policy actions and revive flooding practices to some areas of agriculture.

“In some ways, these innovations are going back to the future,” said CDFA Secretary Karen Ross, in a speech at the forum. “But we have technology and data today to use those kinds of measures in a more precise way.”

Farmers are often the first to point out the irony of flooding as a solution. Mike Wade, executive director of the California Farm Water Coalition, explained in an Agri-Pulse interview that a century ago the state faced a similar problem as today with groundwater overdraft and farmland going out of production. This spurred construction of the federal and state water projects. Farmers later experienced surface water cutbacks following the 2008 and 2009 delta smelt and salmon biological opinions. Groundwater pumping then accelerated during the recent drought, as farmers transitioned away from flood irrigation.

Now flooding has returned as viable approach that benefits the environment, farmers and drinking water. Flood-MAR also fits Gov. Gavin Newsom’s support for locally sourced projects, which will be the centerpiece of his much-anticipated Water Resilience Portfolio. Wade explained that water districts are already working to improve stormwater capture and recharge.

Last year, the Department of Water Resources initiated the Flood-MAR program, hosting the first public workshop and producing a white paper on its findings. The California State Board of Food and Agriculture endorsed the plan. This month, DWR prepared a new research and data development plan based on subcommittee recommendations for advancing the program. That group included dozens of water agencies, conservation groups, research institutions, farmers and commodity groups. The Almond Board was one. It funded a two-year UC Davis study that last year revealed trees “seemed to be pretty well-adapted to these types of conditions,” said the paper’s author, Professor Helen Dahlke. As an added benefit, flooding flushed harmful salts and nitrates from the soil. 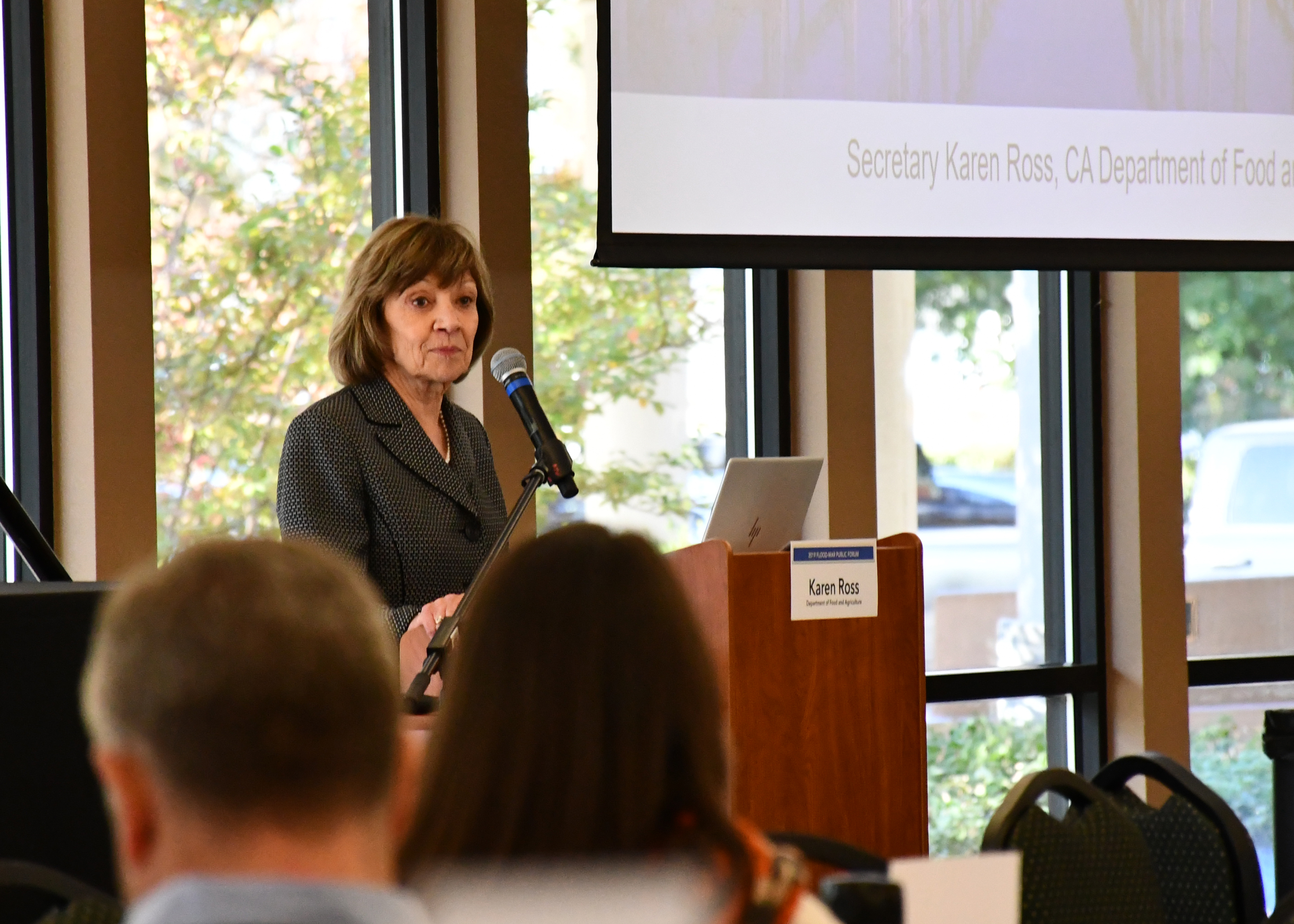 Groundwater banking is also one answer to funding gaps in infrastructure upgrades and maintenance. An effort to raise the Shasta Dam for added water storage stalled recently, in part due to Attorney General Xavier Becerra urging an injunction to block the Westlands Water District from performing an environmental review. At the start of his administration, Newsom also trimmed down the scope of the twin tunnels project, which offered additional capacity for moving more water south for storage and flood control during wet years. This happened while the Legislature shelved a bill to fix the Friant-Kern Canal, voters rejected an $8-billion water bond in 2018 and the proposed Sites and Temperance Reservoir remain in a holding pattern as the projects await more funding.

“I don't know if that makes you all have butterflies in your stomach, but it definitely does for me,” she said.

Flood-MAR offers a pathway for the required aquifer replenishment under SGMA, while adding storage, resilience to drought and ecosystem benefits. It also supports the administration’s push for safe and affordable drinking water and climate resiliency.

The approach – favoring collaboration over years-long legal battles – is also one the administration has increasingly championed. Newsom vetoed Senator Toni Atkins’ broad environmental protection measure Senate Bill 1 in part to preserve the ongoing negotiations over the Voluntary Agreements for Bay-Delta flows. Newsom, who has rapidly responded to the president’s actions on clean air standards, was noticeably quiet last week when federal agencies unveiled the new report on biological opinions – a plan designed to work in tandem with the VAs, according to U.S. Fish and Wildlife Regional Director Paul Souza. Similarly, the CV-SALTS plan approved by the State Water Resources Control Board recently is the result of a decade of negotiations among stakeholders. The proposed plans for Flood-MAR are based completely on voluntary agreements. 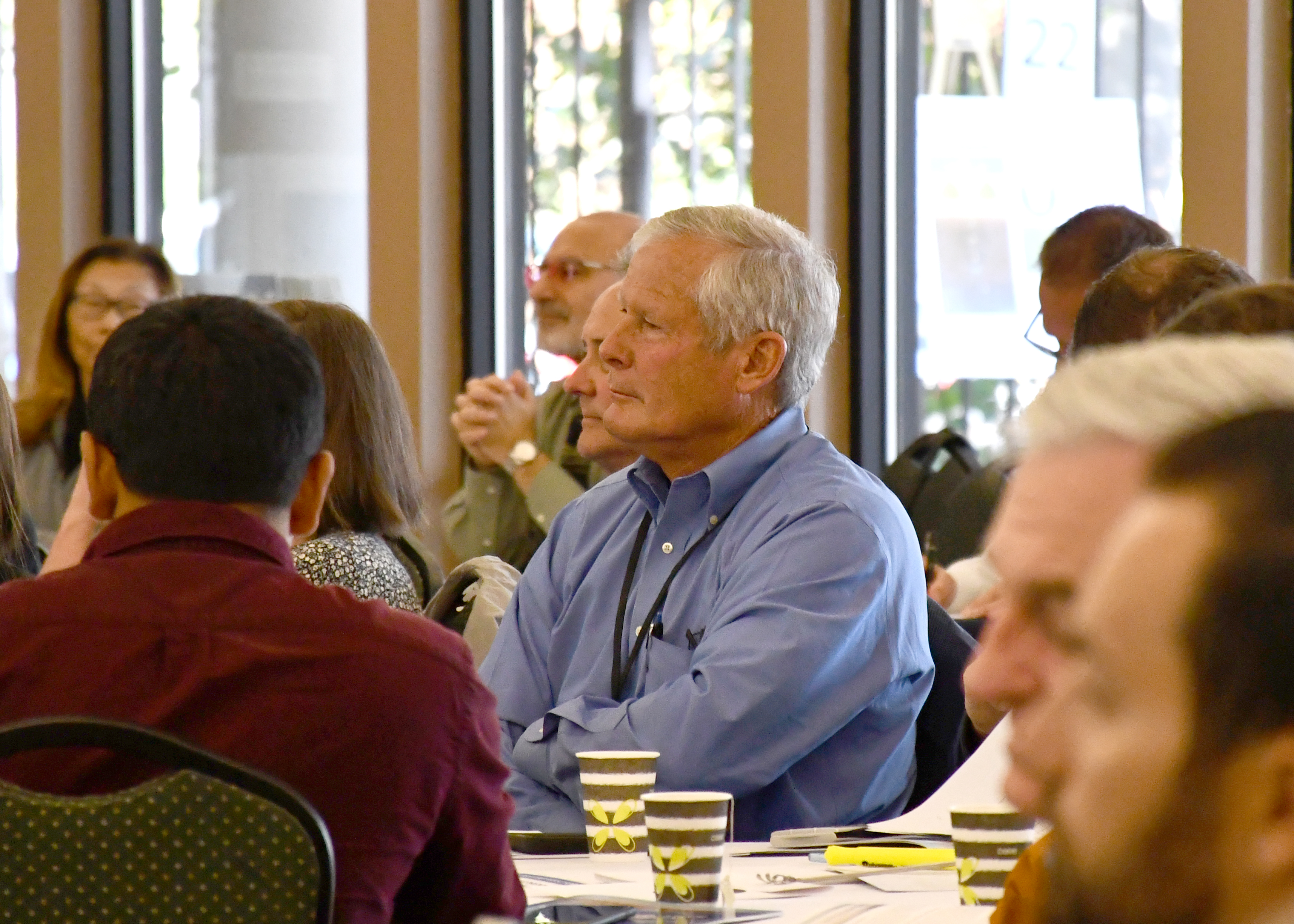 Don Cameron, farmer and president of the California State Board of Food and Agriculture

“It cannot just be one set of stakeholders at the table,” said Ross, referencing Newsom’s “one California for all” commitment. “We all need to sit at the table – that tedious, collaborative stakeholder process – and get to those results that will be more enduring.”

Yet Ross noted the numerous hurdles for Flood-MAR to succeed. She mentioned the Portfolio is looking for recommendations on funding such projects, which may include “climate-water resiliency bonds.” One such bond proposes nearly $8 billion and is currently in circulation as it gains signatures for the 2020 ballot. Ross said while the state’s cap-and-trade program “has not lent itself well to the biological system of farming,” other market-based mechanisms for carbon capture credits “needs to be a part of this discussion.”

She also addressed the legal uncertainty that surrounds groundwater recharge and water trading.

“If (farmers are) willing to put it underground, where is the reliability of being able bring some of that back up?” she said, adding this should not be decided by the courts either.

Negotiations have yet to begin for the many legal layers involved in trading water locally within basins and across regional boundaries. Until that is resolved, the state cannot develop a regulatory framework for trading.

Flood-MAR also raises numerous questions about land use, conveyance needs, economic impacts and reservoir operations. Farmers are pointing out that flooding on agricultural land is limited to certain crops, soils and locations and depends on careful timing and coordination.

Don Cameron, a Fresno County farmer and president of the State Board of Food and Agriculture, is known as the “grandfather of on-farm recharge,” according to Ross. Cameron first began flooding his orchards and vineyards in 1996. The long experiment has brought many lessons on oversaturation, mildew and grant writing. He raised concerns at the forum about the lengthy and complex environmental reviews and permitting process now required for flooding under the California Environmental Quality Act.

Also at the forum, Cannon Michael pointed out that negotiating each multi-benefit project is immensely challenging for farmers and environmentalists. Michael takes pride in the sustainability efforts he has incorporated over years of farming tomatoes at the Bowles Farming Company in Los Banos. Yet he faced difficult mindsets along that journey, such as the belief that farmland can only sustain a healthy ecosystem when it’s not farmed. He has also been on the other side, correcting farmers who poked fun at the demise of the delta smelt. Despite the negative views toward farmers – and conventional farming particularly – Michael remained hopeful.

“There are some positive examples out there, and there could be a lot more of them,” he said in his keynote speech. “It needs that approach of going at it with good intentions but also knowing that you don’t know everything and all the ramifications.”