Some leaders of trade organizations important to U.S. agriculture saw their paychecks rise as they struggled to deal with the COVID-19 pandemic, but the full impact of CEO compensation won't be known for a while due to delays in reporting data, according to an annual Agri-Pulse analysis.

Dawn Sweeney, the former CEO of the National Restaurant Association, is the highest-paid executive in the 2021 Agri-Pulse CEO Report with a salary of $5.9 million, up from $5.7 million in the 2020 Agri-Pulse report. Mike Sommers, the new CEO of the American Petroleum Institute, was second with a compensation package of $3.88 million, and the American Bankers Association’s Robert Nichols is a close third with an income of $3.15 million, up from $2.8 million.

Other members of the $1 million-plus club include David Yarnold, the recently departed CEO of National Audubon Society; Jim Mulhern with the National Milk Producers Federation;  Andy LaVigne, CEO of the American Seed Trade Association; Tom Stenzel, with United Fresh Produce, which is merging with the Produce Marketing Association next year; and Thomas Kiernan, the CEO of American Wind Energy Association, which recently merged with American Clean Energy Association.

The true impact of the pandemic on salaries might not be realized for another year. But some executives were rewarded with pay increases for their efforts to keep supply chains moving and meeting other performance goals. For example, Robb Mackie, president and CEO of the American Bakers Association, saw his base compensation increase from roughly $355,000 in 2018 to almost $395,000 in 2020. The President and CEO of the International Dairy Foods Association, Michael Dykes, had an increase in base compensation from about $818,000 in 2019 to about $869,000 in 2020.

Bob Skelton, the chief administrative officer at the American Society of Association Executives, said that because CEO salaries are set by contracts, pay cuts resulting from the pandemic won’t occur for another year or two — if at all. And with tax deadlines extended due to pandemic disruptions, there is inadequate information available to get a full picture of the impact on compensation. 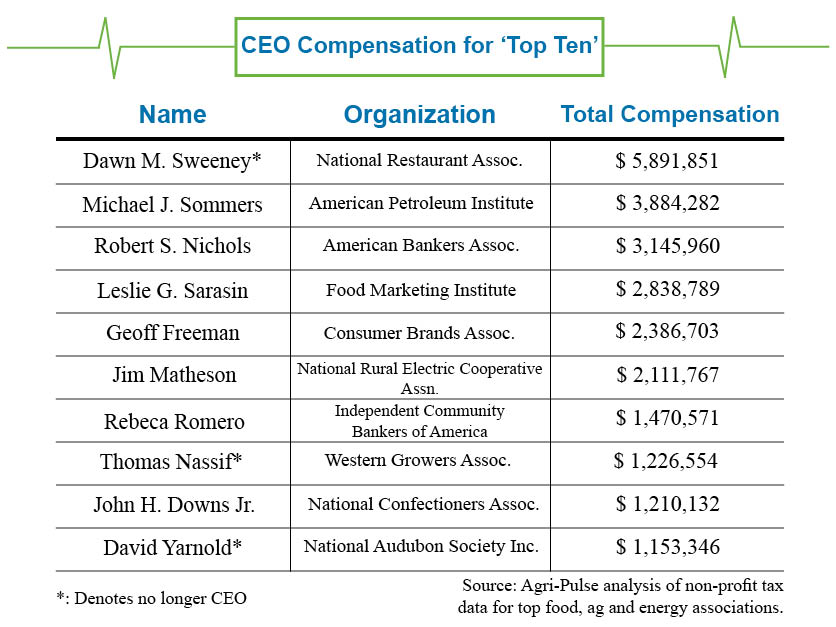 “The biggest challenge I have right now is lack of pandemic data,” he said.

Vishal Gupta, a professor in the University of Alabama’s Culverhouse College of Business, told Agri-Pulse that the effect may be limited, if at all.

Since the pandemic stifled many trade associations’ ability to host the revenue-generating conventions and other events the groups often rely upon, Skelton said the true financial impact will likely depend on an association's ability to respond to gathering restrictions.

“If face-to-face was their way of getting training and development out to their members,” Skelton said, “could they quickly switch to online or to other digital offerings and could they make money doing that? I think some did that very well and others not so well.”

While the total extent of the pandemic’s effect on CEO compensation remains murky, Skelton said that trade associations are currently busier than ever due to the new administration and its priorities.

“You have a ton of money flowing in, with the incentive programs Congress has passed and the infrastructure bill, everybody’s trying to get a piece of it and that is where trade associations shine,” he said. “So I think they’re going to do very well and, accordingly, executives are going to do very well if they’re successful in their activities.”

Not all association executives earned more money than the prior year as a result of job changes or changes in bonuses and other benefit contributions. The most notable is Agriculture Secretary Tom Vilsack, who left the helm of the U.S. Dairy Export Council, where his compensation totaled slightly more than $900,000 in 2019. As a cabinet member, Vilsack earns roughly $221,000.

Environmental Defense Fund President Frederic Krupp saw his base salary increase by about $30,000 from 2019 to 2020, but total compensation dropped by $36,577, due to a sharp drop in his bonus potential. American Farm Bureau Federation President Zippy Duvall's base pay stayed roughly the same, but contributions for retirement and other benefits declined by about $4,500.

Editor's note: Based on reader's suggestions, we try to add new associations each year. But some have not recently filed their 990 forms or do not list compensation levels for their top staff members. That's despite Agri-Pulse's request for more information, which is required by the IRS to be provided upon request. For example, Minorities in Agriculture, Natural Resources and Related Sciences is new to our list this year, but the most recent filing is for 2017. The same is true for the National Black Farmers Association, which last filed in 2017 but lists no compensation for President and Chairman John W. Boyd, Jr.. The organization lists $596,823 in expenses.

For California Citrus Mutual, President Casey Creamer is their new president, but the group's 2019 filing does not detail his compensation. Agri-Pulse noted that "other" salaries and wages for the organization's staff is $819,254. The previous president, Joel Nelsen, earned $212,859. You'll find most of this detail near the individual's name or in the footnotes, including which CEOs receive compensation from more than one organization or which salaries reflect only partial years. Names with an asterisk denote those who are no longer at the helm of each organization but are listed on their most recent 990 forms.

Correction: This story has been corrected to note that Tom Gallagher's total compensation is not one of the top ten in our total compensation chart and is actually $887,930 for his work at both Dairy Management Inc. and the National Dairy Research and Promotion Board. We regret the error.

View the complete list of ag, food and energy-related CEO salaries in our 2021 report here.