CEO salaries were on the rise. Then came COVID-19.

Editors note: This story contains a clarification on CEOs making more than $1 million in total compensation.

The agriculture industry was able to wrap up its annual early-year blitz of meetings and conventions before the onset of the coronavirus led to months-long event cancellations, but with next year’s crop of meetings in jeopardy, organizations are taking a nervous look at their balance sheets — including what they pay their CEOs.

“A key driver for a lot of organizations is going to be how are they now going to measure success?” asked Bob Skelton, the chief administrative officer at the American Society of Association Executives.

Financial indicators have been an easy metric to follow in recent years; an organization with good cash flow generally means a CEO receives a healthy bonus or raise. In fact, Skelton said a 5% bump in pay had become standard for association executives across many different sectors. Now, with the lost revenue of canceled events, one area where there might be some savings is in payroll, specifically in the compensation of their top executives.

The numbers reported in this year’s Agri-Pulse CEO salary report just might represent a peak of sorts, and the financial hit of COVID-19 could deal a blow to organizations that will require years of recovery.

“The whole landscape right now is murky, and there’s going to be changes,” Skelton said. “We’re not going to know all the details about those changes for another year, but things are definitely going to look different.”

But prior to COVID-19, CEO salaries were on a predictable upward trajectory.

According to an Agri-Pulse analysis of tax documents for calendar or fiscal years ending in 2018 or 2019, the average CEO compensation shot up almost 13% over the figures we reported in last year’s survey. Then, the average compensation came in at a little over $566,000; this average figure in this year's report tops $630,000. 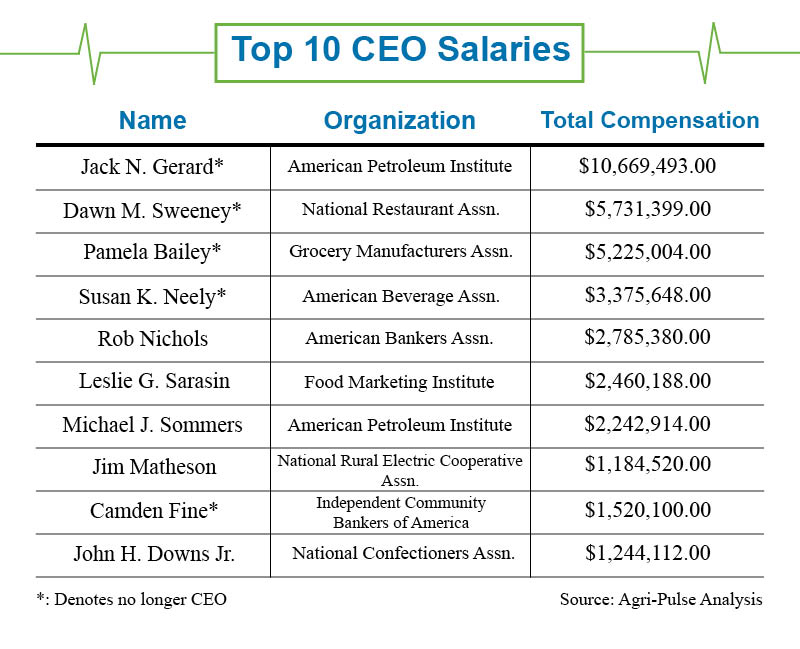 As usual, Jack Gerard — the departed CEO of the American Petroleum Institute — led the way in compensation for this year’s report with a total package nearing $10.7 million. The next highest executive is Dawn Sweeney, who has since left her position as the CEO of the National Restaurant Association, who brought in $5.7 million on her own.

This year’s report also shows an increase in top executives making more than $1 million in total compensation, which includes base salary as well as bonuses, retirement benefits, and other forms of payment. Last year, 11 people in our report topped a seven-figure package; this year, the number crept up to 16, seven of whom are no longer with their respective organizations. However, the $1 million club also boasts new members like Jim Mulhern, the CEO of the National Milk Producers Federation.

CEOs are on the move and salary levels are, too
COVID-19 impact dominates top Agri-Pulse stories of 2020

A keen observer may notice several organizations are listing the same figures we reported in last year’s survey; a number of groups were unable to provide more recent info in part due to filing extensions and staffing challenges caused by the coronavirus pandemic.

CEOs will now be charged with navigating their organizations through uncharted territory, steering through a pandemic and continued financial hardship in rural America that could force some producers to rethink paying dues. Skelton said the steps organizations might take — virtual events, reducing office space, or laying off workers, to name a few — won’t be universal in nature. Organizations will have to decide what they can do, and they’ll be turning to their leaders to figure out what that will be.

“They need to really lead,” he said. Many organizations, his own included, are experimenting with new ways to provide value to their members and generate revenue with an acknowledgment that previous financial plans may have been too reliant on in-person gatherings.

So far, the 2021 “meeting season” has shown a few cracks. The International Dairy Foods Association's Dairy Forum — slated for Jan. 25-28 — will be a virtual event, but the Cattle Industry Convention is still scheduled to take place Feb. 3-5 in Nashville. An email to potential attendees last week said convention planners “are busy working behind the scenes to create a safe, responsible way for producers to come together to enjoy this legendary event.”

There’s been no news on other major events like the gathering of the American Farm Bureau Federation (scheduled Jan. 8-13 in San Diego) or Commodity Classic (March 4-6 in San Antonio).

Whether or not the events are able to take place — and what attendance looks like if they do — will likely have an outsized impact on the financial status of many organizations and the amount of money they can afford to pay their top executives.

Our complete CEO salary report was embedded in the Sept. 9 Agri-Pulse newsletter and can also be viewed online.

This story previously reported a total compensation package for American Seed Trade Association President and CEO Andy LaVigne totaling $1,036,703. That figure is in line with ASTA’s Form 990 for the organization’s 2018 fiscal year, which runs July 1, 2017-June 30, 2018. According to additional clarification provided by the organization, that figure included the double-counting of $136,630 in retirement and other deferred compensation and $33,617 in nontaxable benefits that was already included in LaVigne’s base compensation. According to ASTA, LaVigne’s compensation for that fiscal year was $866,456.