A measure aiming to push California closer to carbon neutrality failed to gather enough votes to pass the Senate on Friday, the last day of the 2021 session. Citing extreme droughts, catastrophic wildfires and intense heat waves, proponents argued Assembly Bill 1395 was a necessary next step in the state’s long efforts to curb climate-warming emissions. Critics argued the measure was rushed, failed to gather the support of labor advocates and threatened to push industries out of state.

“We have to err on the side of aggressive policy right now,” argued Sen. Dave Min of Irvine, in supporting AB 1395 during the Senate floor debate. “This isn't about whether we might reach the theoretical tipping point. It’s about how far past the tipping point we're going to go.”

Supporters painted a grim outlook for California if immediate action is not taken. Min said 2021, which has had the hottest summer on record, will likely be the one of the coolest years Californians experience for the next 100 years. Without significant changes, temperatures will increase more than 10 degrees on average during that time, he argued.

The debate included several impassioned pleas for protecting the senators’ children and grandchildren and preserving their futures.

“In 10 years from now, my grandchildren will be 11 and 12,” said Sen. Connie Leyva of Chino, pausing to wipe away tears. “When they look at me and they say, ‘Nana, when you were a senator, did you do everything to save the planet?’ I want to be able to look at them and say, ‘Yes, Nana did everything she could to save the planet.’”

This drove a heated response from Republican Sen. Melissa Melendez of Lake Elsinore that the arguments in favor of AB 1395 must be “toned down drastically” and the bill should be trimmed down further to avoid pushing more jobs out of state.

“Just because you stand up on the floor and talk about how much of an environmentalist you are and shed a tear,” said Melendez, “that doesn't fly. Because what you're doing isn't protecting the planet.”

Throughout the legislative session this year, Melendez and other Republicans have pushed back on climate legislation with the argument that carbon emissions from wildfires have set back all the state’s climate goals and that more attention and budget spending must be paid to forest management instead of adding more mitigation goals. In a recent report, the Air Resources Board (CARB) estimated wildfires in 2020 emitted 112 million metric tons of carbon dioxide—equivalent to the amount of carbon contained in the lumber of 75% of all the homes in California. 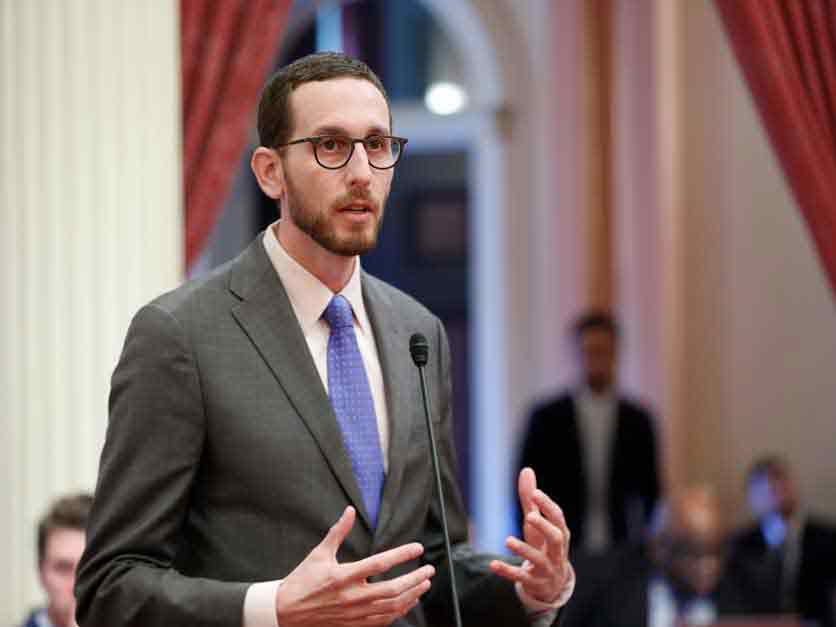 Republican Sen. Brian Dahle, whose rural district stretches from the Oregon border to Lake Tahoe, called AB 1395 another policy that “needs to be fixed,” arguing state agencies and lawmakers advancing climate policies should be held to account for policies that have failed to take care of the environment at the cost of industry.

“I think I'm a pretty good farmer. But at some point, the Legislature is causing my problems more than me,” said Dahle, who runs a seed and trucking business in Lassen County. “I compete against companies in Oregon, Washington and Nevada, and I'm getting killed. My fuel is $1 a gallon more. My regulations are so much more, my wages are so much more.”

Dahle added that if labor groups supported the measure, the Senate would have already passed it. Sen. Maria Elena Durazo of Los Angeles, a former labor leader, confirmed as much by pledging not to vote on the measure.

The author of AB 1395, Assemblymember Al Muratsuchi of Torrance, ostracized himself from several lawmakers representing agricultural districts when he criticized the almond industry and California agriculture more broadly in a hearing earlier this month on the drought. Muratsuchi and other environmental lawmakers also did not support SB 559, a bill by Sen. Melissa Hurtado of Sanger to fund nearly $800 million in repairs to conveyance canals.

In the final weeks of session, moderate Democrats like Hurtado became stronger advocates for industries like agriculture in opposing more liberal measures on labor and the environment.

Hurtado called AB 1395 unrealistic and the wrong approach to stopping climate change and argued California’s current climate strategy is not working. In crafting AB 1395, Muratsuchi built on the state’s existing emissions target of achieving 40% below 1990 levels by 2030. His bill would have instead moved the bar to 90% below 1990 emissions by 2045.

Sen. Ben Allen of Santa Monica worried that may be too weak of a timeline, “given the enormity of the challenge,” while Sen. Scott Wiener of San Francisco said that transitioning to carbon neutrality will be painful but necessary, adding that uncontrolled climate change is already decimating the agriculture industry.

“If we give a damn about the future of this planet, then it's time to go big and to go bold,” said Wiener.

Yet a state auditor report in February seeded concerns among several lawmakers over expanding CARB’s authority for regulating emissions. The report had criticized the agency for overstating its emissions reductions to lawmakers.

“CARB has done little to measure the extent to which its incentive programs lead to emissions reductions by causing individuals and businesses to acquire clean vehicles that they otherwise would not,” said California State Auditor Elaine Howle in a statement accompanying the report.

Howle claimed that CARB had not proven that costly incentive programs were benefiting disadvantaged or low-income communities and that a lack of adequate tracking data meant the state may not meet its 2030 goals. Howle’s office also censured CARB for never surveying participants on feedback for FARMER, a program for lowering emissions by upgrading agricultural engines.

“We have been working on reductions for quite some time in the state. But what has it done for districts like mine? It's created more poverty and more suffering and more deaths,” said Hurtado, in reference to the report. “We need to empower one another. And we also need to empower industry to be the innovators and the leaders of innovation that will help us stop climate change.”

Concerned the bill would disrupt industry-led efforts, farm and business groups strongly opposed the measure in committee hearings. California Farm Bureau policy advocate Taylor Roschen pointed out that the state has been scaling up spending on incentives grants through initiatives like the Healthy Soils Program, which has been touted as helping to store carbon and gained $25 million in new budget spending last week. Roschen argued that AB 1395 threatened to omit existing sequestration efforts on natural and working lands, practices CARB has already been pursuing as it updates the state’s AB 32 Climate Scoping Plan.

Sen. Bill Dodd, who represents the North Coast wine region—one of the most sustainability-centered agricultural areas in California—took offense at the rhetoric that the state was not doing enough to protect the future of its children.

“There's a false narrative going on in this building right now that if you don't vote for this bill, you don't believe in climate change,” said Dodd. “This thing is being rushed today to get out so that California can have the best policy possible.”

In one of the most pivotal moments for climate policy this session, AB 1395 failed to gain the support of Senate Majority Leader Bob Hertzberg of Van Nuys, who shared Dodd’s sentiment.

“We're saying we want to solve this urgent problem. We're setting it out years into the future and we're giving it to an agency that just in the last few weeks would not even respond to senators’ requests who care deeply about these issues,” said Hertzberg. “I don't think that what we have before us here today solves those [climate] problems beyond the rhetoric.”

In defending the measure, Sen. John Laird of Santa Cruz, who served as Natural Resources secretary under former Gov. Jerry Brown, acknowledged the intense complexity involved in climate policy but pushed back on arguments that this bill framed it as “a binary choice” between addressing wildfires and reducing emissions.

“Our chance here is to set a goal,” said Laird, “and catch up with Washington, New York and Massachusetts.”

Those states have signed similarly ambitious climate legislation into law.