Home » Daybreak Oct. 7: Sodium targets could be out soon, along with 'healthy' definition
News Politics Food

Daybreak Oct. 7: Sodium targets could be out soon, along with 'healthy' definition

Woodcock said more than 90% of Americans’ diets have too much sodium, which is linked to high blood pressure and hypertension. The short-term guidance, she said, is currently under review at the Office of Management and Budget.

Susan Mayne, director of the Center for Food Safety and Applied Nutrition at FDA, also said the agency would be publishing a proposed rule later this year to update its definition of “healthy” on food packaging. FDA also is working on a “healthy” symbol that manufacturers can use, she said.

The Biden administration is taking steps to reverse the Trump administration’s revisions to the way the National Environmental Policy Act is enforced.

The Council on Environmental Quality said in a notice of proposed rulemaking in today’s Federal Register that the 2020 revisions may limit the scope of NEPA analysis, “with negative repercussions for environmental protection and environmental quality, including in critical areas such as climate change and environmental justice.”

CEQ also proposed to restore the terms “direct” and “indirect” to the definition of “effects,” saying the 2020 rule has created confusion about the extent to which agencies can consider indirect effects such as air pollution.

For example, greenhouse gas emissions are often “a reasonably foreseeable indirect effect of proposed fossil fuel extraction that agencies should evaluate in the NEPA process, even if the pollution is remote in time or geographically remote from a proposed action,” CEQ said.

Finally, CEQ is proposing to allow agencies to adopt agency-specific NEPA procedures “that align with their unique missions or circumstances.”

Sharon Buccino, a senior attorney at the Natural Resources Defense Council, said it will “re-establish bedrock protections and ensure federal agencies consider the full environmental and health impacts of their decisions.”

But Chad Whiteman, vice president for environment and regulatory affairs at the U.S. Chamber of Commerce’s Global Energy Institute, said the proposed rule “will only serve to slow down building the infrastructure of the future.” 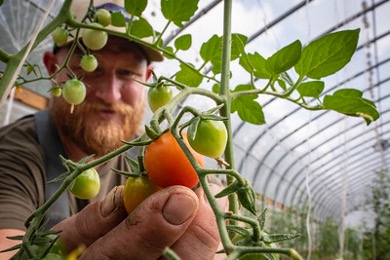 No expense or individual commodity reporting will be needed for the Micro Farm policies, and the insurance also will account for post-production costs, such as washing and packing commodities and value-added products. The coverage will be available to producers with average revenue of up to $100,000.

Independent research conducted for USDA’s Risk Management Agency found that insurance agents have been reluctant to sell conventional WFRP policies and that the paperwork required from farmers “far exceeds what RMA asks of producers in other policies.”

The hackers are out there. You could be next
Schools get another year to meet sodium reduction targets
FDA overhauls definition of ‘healthy’ food, citing new science

The research also said that post-production costs for local farmers are far higher than they are for larger operations. As a result, existing insurance coverage “much more closely reflects the prices commercial producers receive than their direct marketing counterparts,” the research said.

China will be importing substantially less corn for the 2021-22 marketing year than USDA had previously forecast, according to an analysis released by USDA’s Foreign Agricultural Service office in Beijing. The FAS analysts are now predicting that China will import just 20 million metric tons, 6 million less than the department’s official forecast.

“FAS China expects domestic corn prices to fall over the next year, stock building to moderate, and demand to soften as imported corn held in reserves and other stocks finally enters the market,” says the report.

And that means fewer purchases of U.S. corn.

“Current U.S. corn prices have left almost no profit for Chinese importers and feed mills,” says the FAS bureau. “Chinese buyers may withdraw from significant future corn purchases from the United States as the domestic harvest is approaching, feed demand is weakening, local prices have slumped to the cheapest since late 2020, and ports are congested.”

US ethanol exports surged in August

The U.S. shipped 80.5 million gallons of ethanol to foreign buyers in August, a 56% increase from July, according to the Renewable Fuels Association.

More than 40% of U.S. ethanol exports in August went to Canada, marking it as the top destination for the fifth straight month, according to RFA. U.S. exports to South Korea in August were 9.9 million gallons, an 86% increase from July.

New York has certified the first union local with farmworkers in the state. The Retail, Wholesale and Department Store Union (RWDSU) and United Food and Commercial Workers Union (UFCW) will be allowed to represent 12 workers at a vineyard.

Local 338 will be the first to represent farmworkers since the state assembly passed the Farm Laborers Fair Labor Practices Act in 2019.

“We are incredibly proud to represent the workers at Pindar Vineyards and are looking forward to securing a strong collective bargaining agreement,” said John Durso, President of Local 338 RWDSU/UFCW.

More to come: An RWDSU spokesperson told Agri-Pulse the union “is actively organizing in the industry.”

He said it. “Two people do not have the right to sabotage what 48 want, and what the president of the United States wants.” - Senate Budget Committee Chairman Bernie Sanders, D-Vt., referring to the objections that Democratic Sens. Joe Manchin of West Virginia and Kyrsten Sinema of Arizona have made to the $3.5 trillion Build Back Better plan. Sanders called a news conference Wednesday to demand that Manchin detail how he wants to cut the bill.