Farmers are being hit from all sides with increased production costs, but two of the expenses responsible for the most volatility and uncertainty are fertilizers and pesticides.

Whether it’s the Chinese driving up the global cost of phosphorous, Hurricane Ida’s impact on glyphosate and nitrogen production, the threat of U.S. tariffs on urea ammonium nitrate from Russia, or U.S. sanctions on potash from Belarus, American farmers are bracing to sacrifice profits next year for the inputs they need for their crops.

“Everything’s getting harder and harder to get,” said Michael Fruge, a rice and soybean farmer in Eunice, Louisiana. “We never ever had an issue as long as I’ve been doing this.”

For Fruge and other farmers who depend on fertilizing and protecting their crops, the cost of doing business is only going to get worse, said Gregg Doud, chief economist for Aimpoint Research.

“What are we telling clients? Volatility, volatility, volatility,” he told Agri-Pulse about the outlook for the coming months as farmers try to prepare for next year. “We went through COVID last year but everything was still relatively smooth. It is not going to be smooth.”

Much of that volatility is in the fertilizer market, and there’s not just one cause to the supply disruptions that have pushed prices up globally. There are essentially three kinds of synthetic fertilizer – nitrogen, phosphate and potash – and the markets for all of them are in disarray. 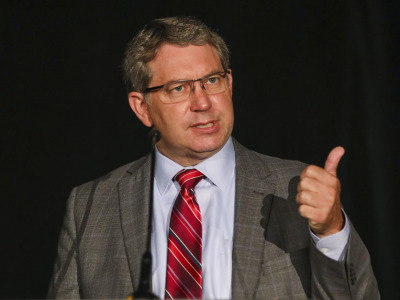 The U.S. doesn’t import phosphate from China, but China accounts for about 28% of global phosphate exports. The country on Friday banned producers there from selling it overseas until June of next year.

That’s creating global scarcity and it’s also helping drive up prices for American farmers, regardless of where they buy it from, said Kathy Mathers, a spokeswoman for The Fertilizer Institute.

“Ninety percent of global fertilizer consumption is outside the U.S., so anything that happens globally, really impacts our market,” she said.

“Whether you buy it from China or not, it is materially impacting the global supply and demand, so it is increasing prices,” said Sam Taylor, executive director with RaboResearch.

The same is true for potassium chloride – or potash. The Biden administration in August announced sanctions on Belarus to punish the country for the fraudulent election of Alyaksandr Lukashenka  – sanctions that include the two major state-owned potash companies that export about 13 million tons of the fertilizer per year. Those sanctions are on a 120-day delay, but Taylor says prices are already rising.

“Belarus has historically comprised about 20% of the global supply of potash and the sanctions against Belarus are creating a supply shock,” said Mathers.

When Fruge plants his rice in early March next year, he likes to use phosphorous and potassium fertilizer, but that’s going to cost him an extra $90 per acre as it stands now – about $100,000 in added expense over what he paid this year.

But he says he can’t afford not to pay it.

“We can’t use less,” he said. “We have to provide the fuel for the crop … There’s not any room for us to take away from the crop. It’s just not something we can do with rice. We’re already operating on thin margins and yield is a priority. We have to have the yield to pay for our expenses. Rice is a high input crop to begin with.” 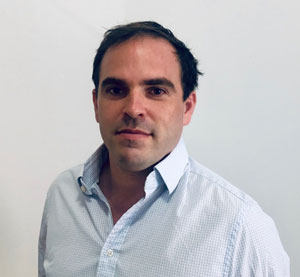 As of Oct. 1, according to an analysis by the Farm Credit Service of America, the national average DAP price was $722 per ton – a 44% increase from the beginning of the year.

Nitrogen supplies are taking major hits around the globe. Production was stalled in the U.S. when Hurricane Ida slammed into the Gulf and natural gas prices forced nitrogen plants in Europe to shut down.

Natural gas production in the U.S. has doubled since 2008, said Mathers, but hasn’t stopped recent price spikes for the fertilizer.

FAO warns of spiking food prices, fertilizer costs due to war
EU seeks to slash pesticide and fertilizer use
Farm Bureau warns of danger from US duties on fertilizer imports

Fast says he uses a 32% nitrogen concentrate to side-dress his crop when the corn gets about 18 inches tall.

“I booked my nitrogen not too long ago,” he said. “I contracted it. It was double from last year and it’s gone up another 20% since then.”

“My father-in-law just booked his nitrogen at $530 per ton,” he added.

Farm analysts and economists are debating whether or not the exorbitant fertilizer prices will drive a move from corn to soybean acres next year, said Taylor, but he stressed he’s not yet convinced there will be a major shift. 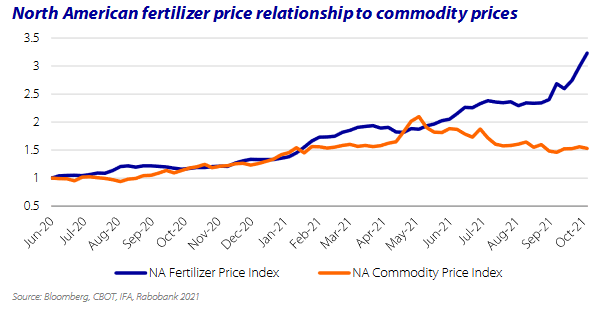 Corn and soybean farmers are both paying much higher prices for their pesticides – if they can get a price for the chemicals from retailers, some of whom are having trouble getting supplies.

Glyphosate supplies and prices are also being rocked by domestic and international events – from Hurricane Ida to the upcoming Olympics in China.

Fruge, who says he plants 1,200 acres of soybeans in Louisiana, is concerned.

“You're looking at glyphosate being three times higher than it was last year," he said.

The largest glyphosate facility in the U.S. is a Bayer operation in Luling, Louisiana. It’s up and running now, but not yet at complete capacity.

“Hurricane Ida impacted the Bayer Crop Science production plant in Luling, Louisiana, causing damage to the site and extensive damage to the entire region,” a spokesman told Agri-Pulse. “The site has resumed full operations ahead of schedule and is expected to be back at full production soon.”

But the impact of supply disruption from China may be an even bigger factor.

China is hosting the Olympics next year and the government, in order to appear more environmentally sensitive under international scrutiny, is ramping up inspections of chemical producers, says Taylor. And producers of yellow phosphate – a key component of glyphosate – are “collateral damage.”

China’s Hunan province – which produces about 40% of all the yellow phosphate in the country – recently announced that it would limit production to just 10% of its normal monthly output to constrain energy use and pollution, said Taylor, and that effectively lowers Chinese production by 35-40%.

“We saw the price of raw materials to produce glyphosate go through the roof and the price of glyphosate followed,” said Taylor. “Glyphosate prices on the Chinese market are up by about 180% year over year. Many Chinese glyphosate suppliers are now temporarily halted and are not taking orders.”

But even the product that China does export is caught up in shipping delays.

Fast says he and his cooperative do depend on imports from China and rising prices are exacerbating the problem of getting the products. Major backlogs at ports are making the situation worse, he said.

“The trouble with chemicals is getting the active ingredients from China and the shipping issues,” the Minnesota farmer said. “Containers used to cost $1,500 and now they’re at $22,000.”