The House is scheduled to vote today on both a $1.2 trillion bipartisan infrastructure bill and the larger Build Back Better package of climate measures and social spending.

Why they matter: House passage of the Senate-passed infrastructure bill would send it to President Biden for his signature. The measure includes funding for rural broadband and Western water projects as well as surface transportation and inland waterways.

The Build Back Better bill contains $90 billion in new spending for agriculture, rural development, forestry and child nutrition. House passage would send the bill to the Senate. 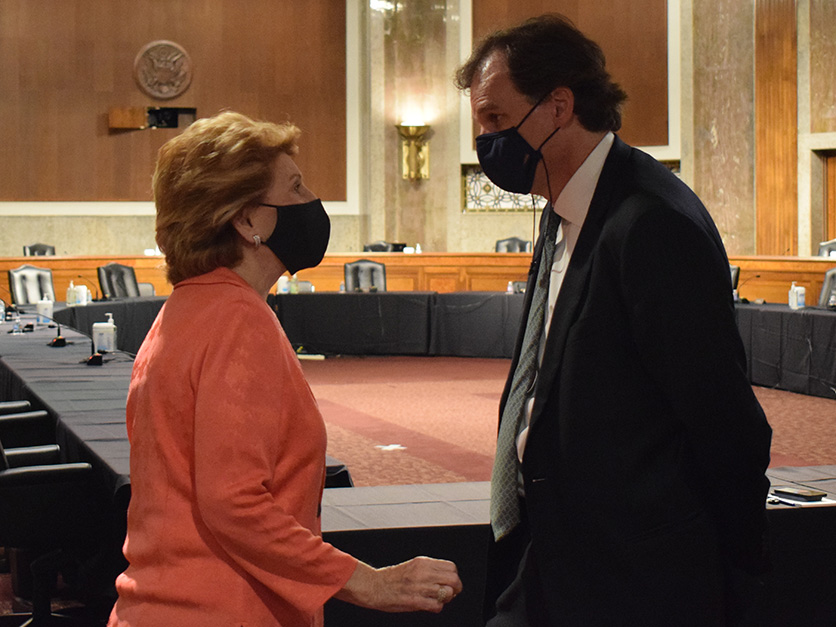 Help is on the way for Ag Secretary Tom Vilsack. Senate Majority Leader Chuck Schumer has teed up votes on Robert Bonnie’s nomination to be USDA’s undersecretary for farm production and conservation, a post that will be critical to implementing President Biden’s climate policy.

The Senate is in recess next week for Veterans Day, but Bonnie’s nomination should be on the agenda the following week, meaning that he could be confirmed before Thanksgiving.

Bonnie, who was nominated for the post in April, has been serving as Vilsack’s top climate adviser while awaiting Senate confirmation.

Bonnie is “incredibly, incredibly talented, and is a really important part of moving us forward, particularly when we're looking at what we're doing now — climate-smart agriculture and sustainable forestry and so on,” said Senate Agriculture Committee Chairwoman Debbie Stabenow, D-Mich.

Keep in mind: The Build Back Better bill contains $27 billion in conservation funding that would be under Bonnie’s purview.

Some agribusiness leaders will be seeking clarity on the new COVID vaccine mandate that OSHA has finalized. The new rule requires employees in companies of 100 or more workers to either get a COVID vaccine or wear a mask and undergo weekly testing.

Justin Darisse, a spokesman for the National Council of Farmer Cooperatives, said OSHA provided “some needed flexibility in terms of the compliance deadline, exempting outdoor workers and clarifying that employers were not required to pay for testing,”

But NCFC is still concerned about the way OSHA is "determining which employers are covered and on the lack of clarity with regards to federated co-ops and their local co-op member-owners.” He said the co-ops also wanted OSHA to address the possibility of supply chain disruptions.

In a Sept. 16 letter to Labor Secretary Marty Walsh and Ag Secretary Tom Vilsack, NCFC President and CEO Chuck Conner asked OSHA to “look at facility size, rather than the size of the overall company, as the applicable employee count to trigger” the mandate. He cited the example of a grain elevator that has fewer than a dozen employees and no contact with corporate headquarters.

National Chicken Council spokesman Tom Super said his group was still studying the rule and plans to submit comments on it.

Rising global demand and lower production for some commodities like wheat and vegetable oil is pushing food prices around the globe to the highest they’ve been in a decade, according to the UN Food and Agriculture Organization.

Beef and pork prices dropped in September – the third consecutive month – as China scaled back purchases. But Canada, Russia and the U.S. are all seeing depressed wheat harvests, and palm oil prices are rising because of labor shortages, the FAO says in its monthly report on global food prices.

Cheese prices are stable, but prices for butter, skim milk powder and whole milk powder are on the rise as buyers try to build up stocks. While total grain production is actually strong, importers are buying up the crops and hoarding them out of concern that prices will continue to rise, FAO says.

U.S. export sales of wheat and corn were sharply higher in the last week of October, thanks primarily to big purchases by Mexican buyers, according to the latest trade data from USDA’s Foreign Agricultural Service.

Roundup plaintiff to SCOTUS: Stay out of case

A California man who won a $25 million verdict in federal court after alleging that Roundup caused his non-Hodgkin lymphoma says there’s no reason for the Supreme Court to overturn the decision.

The jury verdict was upheld by the 9th U.S. Circuit Court of Appeals, and Monsanto filed a petition in the Supreme Court seeking review, mostly on the basis that federal pesticide law pre-empts state failure-to-warn claims.

But in his brief, Edwin Hardeman says there’s no conflict in federal appeals courts on the question. The high court looks closely at whether lower courts disagree when deciding whether to grant petitions.

“Where, as here, a plaintiff proves that a herbicide is dangerous to human health, the manufacturer can be found in violation of both state and federal law,” Hardeman argues. “And there is no split of authority at all as to whether federal law impliedly preempts such claims — all courts agree: it does not.”

Keep in mind: Monsanto’s parent company Bayer hopes a reversal of the 9th Circuit decision will allow the company to avoid compensating plaintiffs in thousands of pending Roundup cases.

She said it. “We want to adjust (the loans of ) those farmers who are at an economic disadvantage, whoever they are, wherever they are.” - Senate Ag Chairwoman Debbie Stabenow, D-Mich., when asked whether she is confident that the farm debt relief provisions in Democrats’ Build Back Better bill could withstand court challenges.

An earlier debt relief program that was limited to racial and ethnic minorities has been blocked by the courts. White farmers could participate in the new version of the program.