A deluge of issues filled a four-hour joint hearing last week for two Assembly and Senate committees. The lawmakers dove into the heart of a port crisis that has bumped agricultural exports to the end of the line for shipping priorities.

Port authorities argued that a lack of federal infrastructure investment has led to the massive congestion in Southern California, with a nearly 11-to-1 imbalance compared to states with smaller ports. Railway companies worried the federal infrastructure package would do little in the near term, owing to the region’s inability to build significant new infrastructure without decades-long legal battles over environmental impacts. Trucking associations cited the driver shortage, while union leaders said better quality jobs are needed.

Farm groups, worn down from a year and a half of shipping issues, have been taking emergency actions to maintain critical international markets, often at the cost of short-term profits.

“The only way that this can be resolved is if the congestion eases and those shipping companies aren't making as much money as they are right now,” said Roger Isom, president and CEO of the California Cotton Ginners and Growers Association and the Western Agricultural Processors Association.

The three ports at issue—Long Beach, Los Angeles and Oakland—handle over $8 billion in annual agricultural exports, according to Isom. Almonds represent slightly more than half that amount, followed by pistachios and walnuts; 73% of the almonds and 100% of the cotton grown in California are exported.

Isom said up to 80% of the export bookings for his members are being cancelled or rescheduled, causing one walnut processor to lose 27 bookings in October. The fees and surcharges for demurrage and storage have ranged as high as $30,000 a month for containers sitting too long at port. Ocean carriers have also bumped up rates for containers while adding peak season and West Coast surcharges.

“As a result, we've lost markets, especially for walnuts,” he said. “European Christmas is a big market and is now being filled by other countries.” 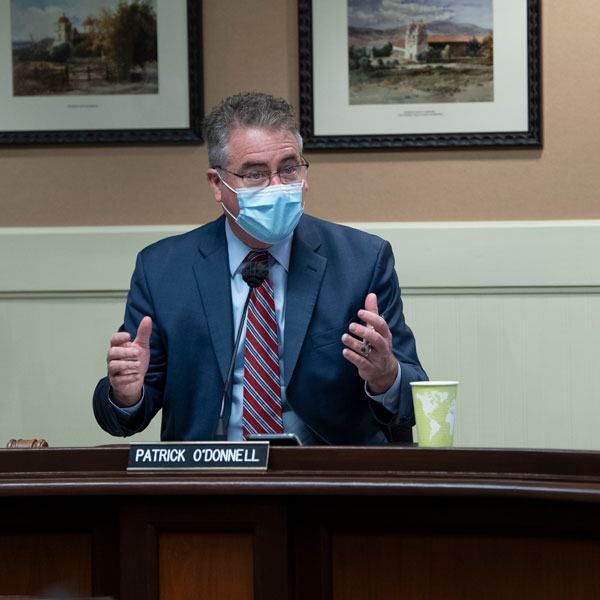 Market losses cost one member $7.5 million of sales in one month. The industry has responded with emergency solutions, shipping pistachios by rail to Houston and Galveston ports in Texas, which costs an additional $1,200 per container and adds no new revenue but simply maintains a foothold in the marketplace, he explained. Walnuts are traveling by rail to Baltimore for shipment to European customers, while cotton is traveling by air freight to Peru “just to preserve those relationships.”

Isom said his growers are at the mercy of foreign shipping companies, which dominate California’s ports, earning them more than $25,000 per container—far more than the $800 for an agricultural export container.

Assemblymember Cecilia Aguiar-Curry of Winters stressed that agricultural leaders want solutions within the next 30 to 90 days.

“You just can't turn on a dime,” countered Asm. Patrick O’Donnell of Long Beach, chair of the Select Committee on Ports and Goods Movement, who explained that it takes time to line up the shipping companies, terminal operator, trucking companies and warehouses—all with legal contracts.

Also defending shipping companies was Mike Jacob, vice president and general counsel for the Pacific Merchant Shipping Association, who described carriers as being at the mercy of the markets. Jacob and others stressed that it is a global issue, with 150 ships currently waiting off the coast of China due to the congestion.

“There have been many, many years where our industry was losing money,” said Jacob. “I don't think profitability in our sector is a bad thing.”

He called the demurrage policies critical to keeping fluidity in the system, and said they serve to accelerate the movement of cargo, “regardless of who they're imposed on.”

Asm. Mia Bonta of Alameda and other lawmakers pushed for more ships to fill an imbalance at ports like Oakland, which is operating at just 50% of capacity and is in close proximity to Central Valley agriculture.

“The whole terminal is empty—empty of containers, empty of ships,” said Danny Wan, president of the California Association of Port Authorities, in describing a recent visit to the port.

Shipping lines used to drop off cargo first in Southern California and then Oakland, picking up agricultural goods there before heading back to Asia, he explained. Now they only drop off in LA or Long Beach.

California Transportation Secretary David Kim noted that the Fresno Council of Governments is working on a feasibility study for an inland port proposal.

Bonta, who took over the seat of her husband, Rob Bonta, in September, pushed for protecting port communities from increased air pollution that could result from new infrastructure improvements and for protecting workers from misclassification.

“One of the reasons why we are struggling in this moment right now is because of the deregulation of the trucking industry that has happened and the misclassification of our truckers as independent contractors,” she said.

Ron Herrera, director of the Teamsters Port Division, echoed Bonta’s comments, while Republican Senator Brian Dahle, who runs a seed and trucking company in Lassen County, argued that one of the biggest problems is a lack of talent for operating the trucks, which has been exacerbated by pandemic-related expansions in unemployment benefits. This prompted Dee Dee Myers, who directs the governor’s Office of Business and Economic Development, to note that rolling back unemployment benefits in other states did not reveal a cause-and-effect relationship to the worker shortage.

Chris Shimoda, senior vice president of government affairs at the California Trucking Association, added that truck manufacturers have been hit by the supply chain crisis as well. With a global microprocessor shortage, the companies have cut back production lines, leaving trucking companies unable to purchase cleaner vehicles to meet regulatory deadlines for air quality standards.

Ramon Ponce de Leon, president of the International Longshore and Warehouse Union Local 13, called it ridiculous to depend on the electrification of trucks.

“We cannot afford any more trucks on our freeways,” said Ponce de Leon. “We need to move to a rail standard.”

He and O’Donnell pushed for rail companies to relieve the load and pollution burdens through on-dock rail. Juan Acosta, regional assistant vice president at BNSF Railway, said the actual issue at play is an unsustainable formula, with more freight coming in and less being picked up.

“We'd love to move more on-dock rail on the railroad,” said Acosta. “But you have to land that freight someplace in California.”

He saw potential in the federal infrastructure bill but noted that Southern California is home to “the poster child for the inability to build anything of significance.” The Southern California International Gateway Project has hardly advanced in 20 years due to environmental permits and lawsuits, he said.

That sentiment was repeated in the hearing with Rachel Michelin, president of the California Retailers Association, who said the constant new laws and regulatory changes in the state have been driving retailers to build new distribution warehouses instead in Nevada or Arizona and bring those goods back to California for sale.

Sen. Lena Gonzalez of Long Beach responded that the warehouse regulation of concern has a three-year phase-in period.

“So there is time,” said Gonzalez. “These regulations are always tough to bear. But I know a lot of the port communities also are dealing with a lot of emission sources.”

When pressed on easing requirements under the warehouse regulation and AB 5, California’s independent contractor law, Myers conceded the administration is “willing to look broadly” but offered no other details.

“I certainly don't think we're going to be willing to just wholesale indefinitely lift certain restrictions,” said Myers. “There's some things that we won't be willing to change.”