While rising inflation has significant impacts on the state’s food production, experts are quick to highlight many other issues impacting farmers as part of a perfect storm of rising costs in California agriculture. The soaring food prices have become such a rapidly growing concern that Assemblymember Marc Levine of San Rafael held a select committee hearing last week on the issue, during the busiest period of the legislative session.

“Few issues have universally impacted families across California in just the past year like the inflationary impact on food prices,” said the Bay Area Democrat, as he cited a statistic from the U.S. Department of Labor that grocery bills have swelled by 8.6% in the past year, the largest jump since 1981. “This is not sustainable for many families.”

Bolstering those concerns was Jerry Nickelsburg, an adjunct professor of economics who leads the UCLA Anderson Forecast.

“One of the largest drivers of inflation today is food,” said Nickelsburg, as he pointed to a lower wheat supply coupled with rising production costs.

As a silver lining, California has seen inflation drive up food prices at a slightly lower rate than the national average, due to the state’s large agricultural industry, according to Nickelsburg. But Californians have been spending about 13% of their income on food, while low-income residents are dedicating at least a quarter of their paychecks to food.

To curb the rising prices for consumer goods, Gov. Gavin Newsom is proposing a $9 billion relief package in the state budget that includes a $400 tax rebate for vehicle owners, along with a pause on the diesel sales tax rate. Lawmakers have issued various other proposals for alleviating costs as well, which are all under negotiation as the Legislature races toward a June 15 deadline for the budget. 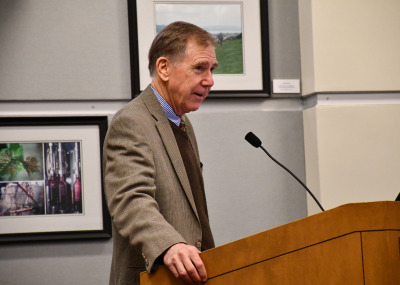 Levine, who chairs the select committee and is one of the newest members of the Assembly Agriculture Committee, is running for California insurance commissioner against fellow Democrat and incumbent Ricardo Lara, who has worked closely with agriculture on filling gaps in coverage due to wildfire risks.

Sumner explained how prices for almonds and alfalfa, for example, can jump up and down each month from supply shocks or just bad weather—which is why the Federal Reserve discounts food prices in measuring inflation. He attributed the national trend in rising egg prices to the avian influenza outbreak and to California’s Proposition 12 animal welfare law, since cage-free eggs can sell at twice the cost of conventional ones. And farm prices account for “very little” of the food prices, making up just half of what consumers pay for milk, a commodity that requires little processing.

But growers are far from immune to inflation.

“As farmers buy the full range of goods and services from the economy—everything from farm labor to accounting services—inflation in the general economy affects costs on farms,” said Sumner. “What you think is two or three steps away from the farm will affect farm costs.”

The rising housing costs in Los Angeles, for example, can play a role in a farmer’s bottom line, he explained. A local accounting firm seeking to retain its employees would respond by bumping up salaries, driving up costs for the services they provide to farmers and others.

According to the Producer Price Index at the U.S. Bureau of Labor Statistics, inflation is up 32% in production, 36% in energy, 23% in processing and 20% in transportation.

“These are really, really large numbers in the specific sectors and along the supply chain,” said Kelly Ash, a lobbyist with the California Grocers Association, in describing the impacts to food retailers. “We happen to be the culmination of where all of that stuff meets and where the consumer sees the price tag.”

Drought, port congestion and rising international competition, meanwhile, are driving down prices for California commodities like walnuts, though that makes them more affordable for consumers.

While farmers lament new spikes in the minimum wage and for overtime, the pay increases are still not enough for farmworkers to keep up with food prices, said Sumner. The drought and higher wages “are going to leave those people even more vulnerable than when they started.” As inflation eventually winds down, it could present the same severe problems the industry faced in the early 1980s, when a financial crisis led to low commodity prices and farmland values.

“We have to recognize how capital-intensive agriculture is,” said Sumner.

Pistachio trees can last half a century and farmers have traditionally shouldered that investment through loans paid off over several years. A farmer has to be confident pistachio prices will stay high enough to cover the cost of the loan.

“Navigating the winding down of inflation then raises even more concerns—or at least equal concerns—and has its own problems,” he said.

While Sumner defined how inflation specifically impacts the industry, California Farm Bureau Administrator Jim Houston broadened the discussion to the overall situation the industry is facing. Houston described inflation as “just the last and most predictable result of the policy choices that have put us in the place that we are today,” and he feared the 1980s crisis is repeating. He blasted state leadership for leaving farmers vulnerable by not investing in water storage and conveyance infrastructure ahead of the drought, arguing the reluctance to build new dams in California has led to drastic cutbacks in both rural and urban water use.

Houston then ticked through the many inflation-induced numbers. He noted that fertilizer costs have spiked higher in California than the national average. Organic growers are struggling to find nitrogen, while the cost for sulfur, their primary fungicide, is up 400% over last year. 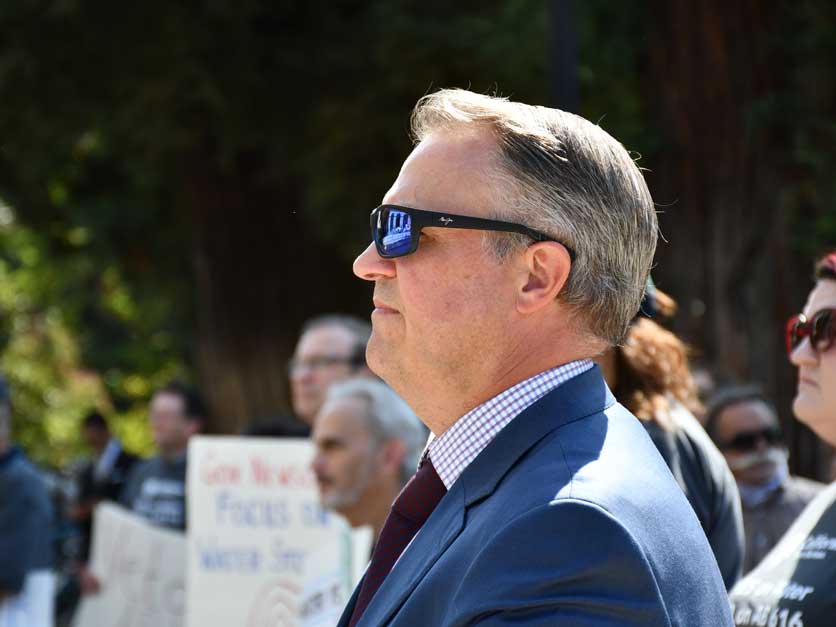 “Pesticides are 300% above last year, if you can get them,” he said, pointing out that in a normal year 40% of crops nationwide are lost to pests and diseases. “A dearth of these tools only exacerbates the food supply issue and undermines our carbon sequestration efforts.”

The almond supply, meanwhile, is oversaturated from supply chain bottlenecks, while tomato growers are struggling to have a crop during the drought.

“Keep in mind, we are 99% of the world's almond supply. We are 90% of the United States’ supply of processing tomatoes and 60% of the world's supply,” said Houston. “This is a global problem.”

Rather than addressing the “apocalyptic global food supply shortage,” the governor and lawmakers are hoping to spend billions “to get farmers and ranchers to grow less by buying up their land and water and paying them to grow less food” and “dribbling it out through [conservation group] intermediaries.” He called for lawmakers to tell the State Water Resources Control Board and the Air Resources Board “that enough is enough” when it comes to new regulations and that it is time for reasonableness and practicality.

Along with expanding the state’s portfolio of water supply projects, he called for direct relief to farmers and a tax credit to employers implementing the new agricultural overtime law.

Both Houston and Levine worried that Californians take agriculture and a stable food supply for granted.

Finding ways to alleviate inflation costs on consumers can be just as challenging. According to Sumner, California could follow the federal government’s lead and direct money to low-income Californians identified under USDA’s Supplemental Nutrition Assistance Program.

He dismissed Sacramento’s focus on gas prices, calling it an endless pursuit to tie subsidies to headline-grabbing issues.

“What we're really talking about here is trying to help people that are most vulnerable,” said Sumner, pointing out that focusing on car owners would also benefit affluent Californians. “That doesn't seem like the way we want to respond to this as a state.”

With a record budget surplus, the governor and state lawmakers have been working on many other measures to address food insecurity in California, particularly in the San Joaquin Valley.

Senator Melissa Hurtado of Sanger has authored a measure to include all residents, regardless of immigration status, in California’s food assistance program and joined colleagues in submitting a similar budget request. The Legislative Analyst’s Office estimates up to 840,000 additional individuals would be eligible. The governor is proposing the same policy for those 55 and older, along with $35 million in the budget. The Senate, meanwhile, would allocate $284 million to cover all ages.

The issues will continue to dominate the Legislature throughout the summer, as the impacts of drought and inflation grow more severe and the legislative session draws to a close two months ahead of November elections.