Home » What does Maine's 'right to food' amendment mean for ag? The courts will decide
Environment News Politics Food Rural

What does Maine's 'right to food' amendment mean for ag? The courts will decide

Maine voters chose to enshrine a right to food in their Constitution last Tuesday, becoming the first U.S. state to add such an amendment. The measure may not change much, if anything, about the state’s laws surrounding the production of food. Or it could entirely reshape them.

But, for now, nobody knows for sure.

It will be up to the state’s judges to define the boundaries of the amendment, which was approved by about 60% of the state's voters after clearing the legislature in May. But they can’t do that until issues implicating the amendment make their way into the courts. At this point, it’s impossible to know how it will be interpreted.

“We are the first state in the country to constitutionalize this right,” Scott Bloomberg, an associate professor of law at the University of Maine School of Law, told Agri-Pulse. “No court has taken a look at this language or any language similar to this before, and so the contours of the right are going to be worked out by judicial review.”

It isn’t typical for Maine to hold the national spotlight when it comes to agricultural issues. According to the USDA Census of Agriculture, the state only had 7,600 farms in 2017 and, that year ranked 43rd in the nation in terms of the market value of agricultural products sold. But recently, it has been at the forefront of a movement emphasizing local agriculture and self-sufficiency, and what happens in the wake of this amendment’s passage could serve as an example to states like West Virginia where similar provisions are being considered.

Several of the local groups which publicly opposed passage of the amendment — including the Maine Farm Bureau, the Maine Potato Board, the Maine Grocers and Food Producers Association, the Maine Veterinary Medical Association and the Maine Municipal Association — voiced concerns about the vagueness of the amendment and its potential to completely upend all state and municipal laws involving agriculture. But its supporters, like state representative Billy Bob Faulkingham and the Maine Organic Farmers and Gardeners Association, say it will neither constrain other rights nor force the government to give people free food, but instead protect an individual’s right to “feed themselves in dignity.”

The division springs from concerns over how the amendment’s wording could be interpreted. State constitutions are the ultimate source of authority for government at the state and local levels and, while Maine’s constitution has no power over federal laws and regulations, it does define and shape many of the laws that the state’s inhabitants interact with on a day-to-day basis. 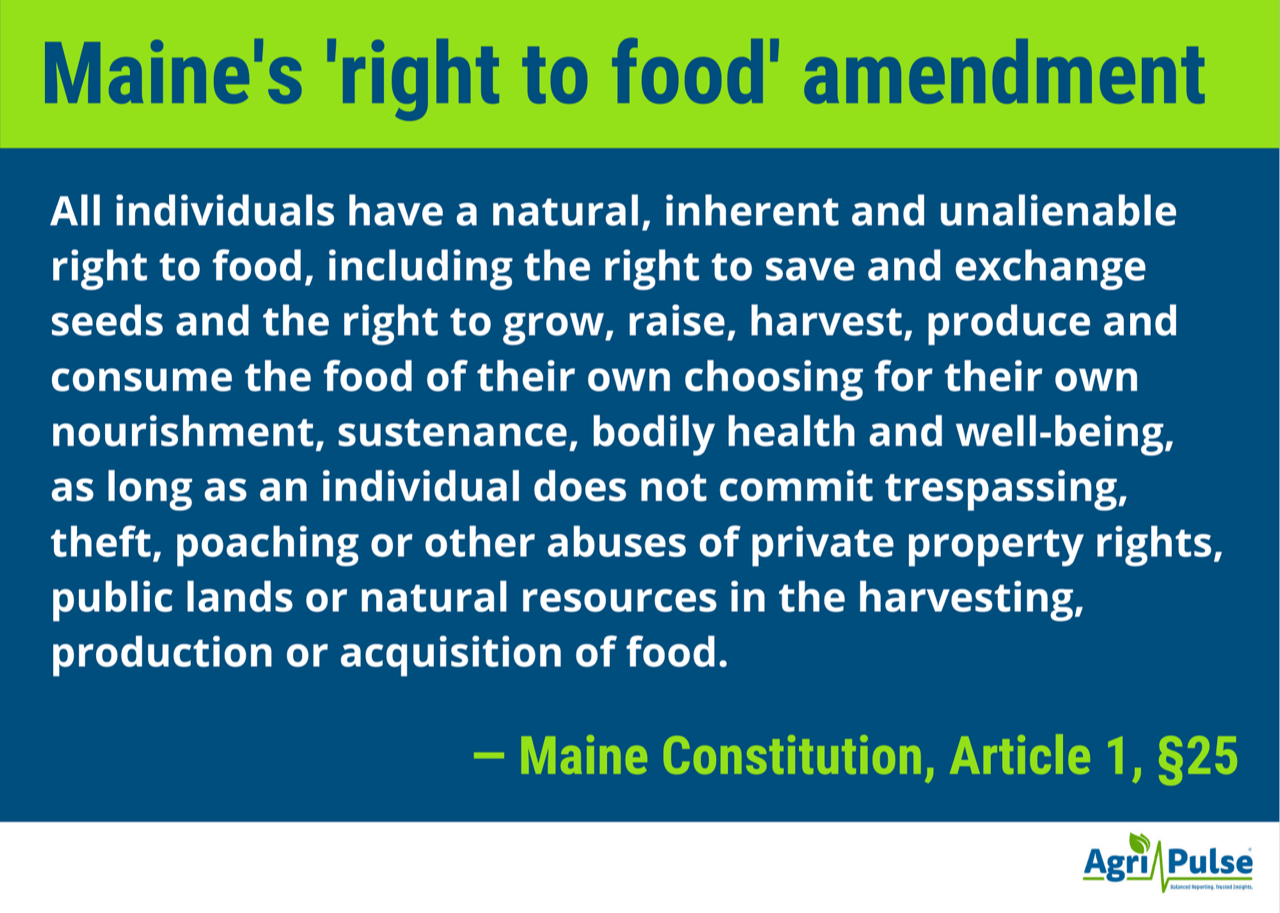 The most watchers can do at this point is analyze the amendment and look at the potential ways the judicial system could interpret it. Bloomberg sees its language as pertaining almost exclusively to the production of food for personal use, as in private gardens.

He said it might not have a large impact on current laws surrounding commercial agriculture in the state.

“I think some people may have seen this amendment and feared that, or maybe hoped that it would strike down food, health and safety rules on commercial production and exchange of food and agricultural products,” Bloomberg said. “I don't think it does that, because it seems that the language seems to be all geared at personal production and consumption of food.”

But Rebekah Graham — a legislative advocate for the Maine Municipal Association, which opposed the amendment’s passage — thinks it could have a much greater impact on existing laws surrounding agriculture in the state. She said the amendment takes the democratic process away from communities and instead moves it to the courts.

As the judges weigh the cases brought to them, Graham says they will be able to reshape how laws interact with food in potentially every aspect of the system at the state and municipal levels: Food safety requirements; Animal welfare laws; School lunch programs; Food operations in jails; Water laws; Pesticide ordinances; Hunting restrictions; and City animal ordinances. She says all could be subject to rulings if they are brought to court.

Even future areas of law that the state or municipalities could explore, like requiring certain farming practices to increase carbon sequestration or reduce fertilizer runoff, could be impacted.

“The only way in which a constitutional right is established is through litigation and by the court deciding the parameters of that based upon a case,” Graham said. “So there's a lot of talk about what folks think the amendment does, but in truth, nobody can say what it does because the court is the only one that's going to make that decision.”

One of the primary concerns for Julie Ann Smith, Maine Farm Bureau's executive director, is that the right will override food safety regulations put in place by the state.

Her fear hearkens back to June of 2017 when the Maine legislature passed a law giving municipal governments the power to regulate food grown, produced or processed and sold directly to consumers in their municipality — even if those regulations did not align with state ones. The bill drew the attention of the USDA, which threatened to take away the state’s authority to inspect small meat processing facilities because the law did not stipulate that these processors also needed to follow federal guidelines.

What will tomorrow’s ag workers and farmers look like?
What’s ahead for the farm economy in 2022?

In that situation, the legislature avoided USDA interference by amending that law to require food products to comply with applicable state and federal food safety regulations. But now that the constitution has been amended, Smith believes this problem could emerge again and, this time around, be a lot more difficult to fix.

Smith said on Nov. 4, she spoke to USDA officials who warned her the agency would take away the state’s meat inspection program if it found people were not following federal standards. USDA was unable to respond to questions from Agri-Pulse before publication.

Smith said the USDA representatives she spoke to indicated they will continue to allow the state-inspected program for now. But if it were to go away, any producers who do not process their meat in a USDA-inspected facility, would not be able to sell it in the state's grocery stores. Their only option would be to sell it directly on their farm.

Concerns also exist for other products, like potatoes. Smith says the state currently has a program requiring that all seed potatoes be tested to identify potential diseases and pests. It’s an issue that both the Maine Potato Board and the American Seed Trade Association have expressed concern about.

Plus, Smith said intellectual property laws surrounding seeds could also be an issue as well. If the right is defined to allow citizens to save and exchange patented seeds, she said companies with seed patents could decide to stop selling in the state.

But state legislator Billy Bob Faulkingham, a proponent of the amendment, told Agri-Pulse it is an individual right and does not apply to commercial production.

In a public comment before the election, Faulkingham wrote that “seed patents are secured.” Later, when speaking to Agri-Pulse, he said he also doesn’t foresee it impacting state food inspection programs.

“Food inspection isn't going anywhere,” Faulkingham said. “People that want to buy … food from the grocery stores, nothing’s going to change in that food supply. What this is doing is this is protecting people's right to produce their own food and the food of their own choosing.”

Faulkingham said he thinks the amendment could help make Maine, which currently imports more than 90% of its food supply, more self-sufficient. He called the amendment’s passage a “critical victory” for protecting people’s farming, hunting and fishing rights.

“I think what it does is it slams the door in the face of people that would seek to get between us and our food,” he said.

But, for now, it’s not clear what sort of impact the amendment will have. Nobody — not academics, not agricultural groups, not Maine’s citizens, not even its legislators — can agree on the future. Whatever happens next is up to the courts to decide.