A majority of U.S. farmers are at least somewhat concerned about climate change, and nearly half are using or considering practices to reduce greenhouse gas emissions, according to a new Agri-Pulse survey of U.S. farmers.

But getting most farmers to participate in carbon markets will require payments of at least $40 an acre, far more than they currently earn, according to the online poll conducted by Aimpoint Research.

Some 57% of farmers expressed some concern about climate change, and even more farmers worry about soil health and water quality. Both are issues inextricably linked with practices, such as cover crops and conservation tillage, that can also reduce greenhouse gas emissions as well as prevent soil loss.

The survey of 589 farmers nationwide, a group that is heavily Republican, also found strong support for former President Donald Trump and dissatisfaction with the current direction of the country under President Joe Biden.

Biden has committed the United States to halving its greenhouse gas emissions by 2030, and agriculture and forestry are expected to play a significant role in those reductions, and farm and ag groups have been working to shape the administration's approach through a Food and Agriculture Climate Alliance that was announced a year ago.

The massive Build Back Better bill that Biden is pushing Congress to pass includes $27 billion in new conservation provisions that are aimed at coaxing more farmers to adopt climate-smart practices. The funding includes a program that would pay farmers $25 an acre for planting cover crops.

“We consistently hear that the market needs to be paying at least $25-$30 to get farmers on board,” said University of Illinois economist Krista Swanson.

The problem for many farmers is that the emerging carbon offset markets want farmers to take on practices that they aren't doing already, Swanson said. “Often that takes hefty farm level investment without a clear or noticeable return to the farm,” she said. 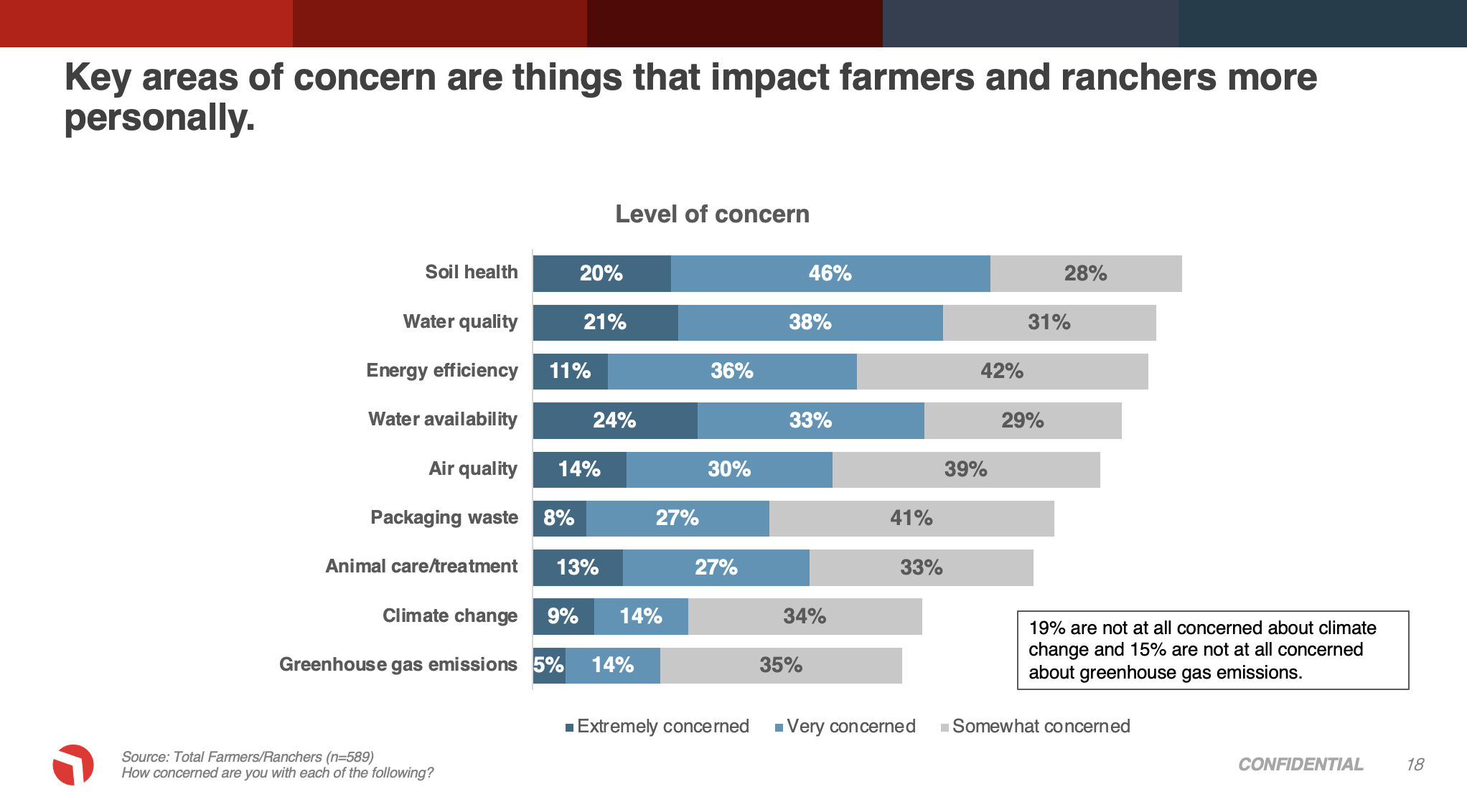 The poll shows a clear openness to climate-related practices. Some 28% of farmers are actively implementing practices that reduce their operations carbon footprint, and 17% are considering doing so. Another 32% said they need to better understand the issue. The remaining 22% said they don’t believe there is a need for such practices.

Some 61% of those polled said they would need to be paid at least $40 per acre to participate in carbon markets, while 11% would be interested if payments were worth at least $30 an acre. Another 19% of farmers could get involved if they make at least $20 an acre.

The surveyed farmers also were given a list of nine issues and asked to rate them as concerns for their operation. Soil health ranked as a concern for 94% of the growers, 20% of whom said they were extremely concerned with the issue. Water quality and energy efficiency followed close behind, rating as a concern for 90% and 89% of producers respectively.

“We hear more and more from farmers/ ranchers that the weather is more extreme than before,” said Ray Gaesser, an Iowa corn and soybean grower and former president of the American Soybean Association.

“The need to adapt is high on their list and from experience, they are pretty confident in the industry and their personal ability to innovate and adapt, including the possibility of changing crops.”

Bruce Knight, a conservation consultant who held senior positions at USDA during the George W. Bush administration, said the poll results suggest that farmers may adopt and stick to climate-related practices that have a "positive soil health attribute."  That's important because farmers would be more likely to continue such practices when they stop getting paid for them, he said.

Agri-Pulse Poll: Farmers back carbon markets, but divided on climate change
Daybreak Nov. 9: Survey: Changing ag to address climate change not a priority for many

Gaesser agrees that it's likely to take payments of $40 to $50 an acre to get farmers involved in carbon markets. The $9-an-acre payments that he said some farmers are now getting "is just not enough" given the long-term contracts growers have to sign, he said.

Gaesser, who attended the recent international climate conference in Glasgow, Scotland, serves on the board of Solutions from the Land, an organization that advocates for “integrated land management solutions” that can address climate change and food security while promoting economic development and protecting biodiversity.

The Bayer Carbon Program is offering $9 an acre to farmers who use both cover crops and conservation tillage. Indigo Ag, one of several companies that is starting to buy and sell ag carbon credits, offers farmers a minimum of $15 per credit; farmers can earn two credits per acre, depending on the estimated amount of carbon sequestration or abatement. The company in September announced its first payments to 267 growers.

Carl Zulauf, an economist at The Ohio State University, also isn't surprised at the amount of money farmers want in exchange for undertaking climate-related practices.

"Academic studies of private market returns to cover crops are far more variable in terms of agronomic costs vs. benefits than supporters of cover crops want to acknowledge," he said. "My discussion with farmers find the same division of outcomes."

The poll suggests that Biden will need to rely heavily on Agriculture Secretary Tom Vilsack to sell his ag policies. Some 75% of farmers surveyed are dissatisfied with the direction of the country and only 15% approve of the job that President Joe Biden is doing.

On the other hand, Vilsack’s approval rating is at 52%; Vilsack is a respected, known quantity with farmers, having served all eight years of the Obama administration.

Some 29% of the farmers surveyed approve of the job that EPA Administrator Michael Regan is doing.

Farmers strongly backed Donald Trump when he was in the White House, and more than one-third of those polled are ready to support him if he runs for office in 2024. Most farmers indicated an interest in another candidate. From a list of nine possible GOP candidates, 36% of the farmers picked Trump. Former Vice President Mike Pence was favored by 14% and Florida Gov. Ron DeSantis was selected by 11%. South Dakota Gov. Kristi Noem was favored by 9%. As in recent past national surveys in farm country, the audience leans heavily Republican.

The farmers also were asked to give a grade to the 2018 farm bill. Nearly half, or 49%, give the legislation a “C,” while 39% chose “B.” Just 3% gave the law an “A” and 8% are apparently so unhappy with the bill that they gave it a “D.” The farmers indicated they would like to see Congress give more attention to issues that affect their bottom lines, including commodity programs, crop insurance and trade.

Still, many farmers are either feeling better about their own operations than they were a year ago or at least no worse. Some 54% said conditions this fall are about the same as they were a year earlier, while 28% said things are better than in 2020.

Some 63% of the farmers said they would encourage their children to pursue farming as a career.