Can Build Back Better funding survive the next farm bill?

The Biden administration and congressional Democrats are aiming to use the agriculture provisions in the Build Back Better bill to jump-start farmers’ work on climate-related farming practices and potentially create permanently higher levels of funding for conservation programs.

But Republicans are warning that they may try to put the money to other uses if they get control of Congress and the Agriculture committees.

And there’s also uncertainty about whether the Congressional Budget Office will go along with some legislative gymnastics that will be necessary to convert the Build Back Better funding into permanent spending baseline for future farm bills.

The House-passed bill, which would cost roughly $1.7 trillion and may be scaled back in the Senate, contains $82 billion in agriculture provisions, including about $27 billion in new funding for conservation programs.

Senate Agriculture Chairwoman Debbie Stabenow, D-Mich., has at times suggested that the ag-related funding in the bill would be used to create permanent farm bill baseline. She now stops short of confirming that’s the plan.

“This is all part of the ongoing discussion now that I really can't answer yet,” she said when asked about the issue earlier this month. “So, we will be able to answer it but not yet. It’s certainly positive (for the farm bill), it’s not negative.”

But the committee’s top Republican, John Boozman of Arkansas, emphasizes that he won’t feel bound to spend the money as the Build Back Better bill directs if he becomes the committee’s chairman after the 2022 elections. Congress is due to write a new farm bill in 2023.

“Certainly, we don't feel constrained … to honor anything that has been done now,” he told Agri-Pulse of the BBB funding.

Boozman said he wasn’t sure whether the funding could be converted into permanent farm bill baseline. A spokeswoman for Stabenow declined to discuss the issue before the bill is enacted.

But farm bill veterans and congressional budget analysts say the House and Senate Agriculture committees could potentially convert the Build Back Better funding into permanent farm bill baseline by rescinding the reconciliation money and then reallocating those funds through the next farm bill. The CBO and congressional Budget committees would have to go along with those changes, however.

It’s also possible, as Boozman has suggested, that the next Congress could move the money out of the designated programs and into other parts of the farm bill, including the commodity or crop insurance titles.

“In any farm bill you can always move money around if there is enough political will to do so,” said Patrick Westhoff, director of the University of Missouri’s Food and Agriculture Policy Institute.

But Republicans would almost certainly need Democratic support to redirect the funding. Farm bills can’t be moved through the budget reconciliation process, so they need 60 votes to pass the Senate.

“I think it would be really tough to say … this was climate-related money, but now we're going to make it about something completely different. I think that would be politically difficult,” said Ferd Hoefner, an agricultural policy consultant and longtime policy director for the National Sustainable Agriculture Coalition.

Republicans are only likely to control the Senate by a handful of seats, even if they do win control of the chamber in 2022. One leading group of analysts, Sabato's Crystal Ball at the University of Virginia, has Republicans favored to win 49 seats in 2022 with four more races rated as toss-ups.

While ag groups have been cautious about taking public stands on a highly partisan bill, the ag provisions do have support from some farm groups, who see the funding as critical to helping farmers meet demands from their customers to reduce greenhouse gas emissions and sequester carbon.

The biofuel industry, for example, believes the funding will help lower the carbon footprint of ethanol and meet low-carbon fuel standards such as the one now in place in California.

In a new letter to the House and Senate Ag Committees, the National Corn Growers Association and biofuel industry groups say the reconciliation bill’s ag funding “will build new markets for farmers and biofuel producers and help lower the carbon intensity of agriculture.”

Even the American Farm Bureau Federation, which opposes the overall bill, concedes in a letter that "some elements of the reconciliation package would benefit agriculture."

Meanwhile, two former chairmen of the House and Senate Ag committees, former Rep. Collin Peterson, D-Minn., and retired Sen. Pat Roberts, R-Kan., worry that partisan divides will make it hard for the next Congress to even pass a new farm bill.

Speaking recently at the annual meeting of the National Association of Farm Broadcasting, Peterson said he is concerned lawmakers may be forced to pass a simple extension of the 2018 farm law.

“The big challenge politically, you know, no matter who controls Congress, is going to be trying to keep these guys out of the ditch, and keep them from fighting with each other, which they seem to do over everything that comes up,” Peterson said of lawmakers. 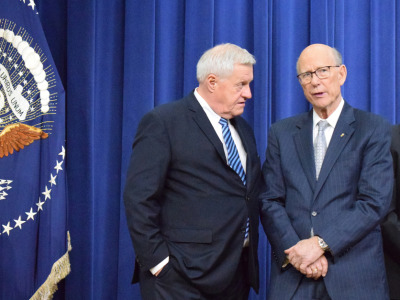 Former ag committee leaders Rep. Collin Peterson (left) and Sen. Pat Roberts, R-Kan. (right)He went on, “If I had my crystal ball, no matter who’s in charge of this thing, I think it’s going to be very difficult to get a farm bill passed under any circumstances,” he said.

Roberts said it is critical that the Senate retain the existing filibuster rules and the 60-vote requirement for passing non-reconciliation bills. The 60-fold threshold would ensure that a farm bill needs bipartisan support to pass.

“To get 60, I have to get Democrat votes if I'm the Republican chairman, and vice versa with Sen. Stabenow,” Roberts said.

The Build Back Better bill would authorize $27 billion in new conservation funding, including a new, $5 billion program that would pay farmers $25 per acre for five years to plant cover crops.

In all three cases, most of the money for the three programs is earmarked for spending in fiscal 2024 through 2026. All but $800 million of the EQIP funding, for example, would be authorized for spending from FY24-26.

Another $600 million is designated for a new USDA program to measure the impact of conservation practices on greenhouse gas emissions and carbon sequestration.

The bill also includes $2 billion for agricultural research, $1 billion of which is earmarked for infrastructure improvements at minority institutions. There is $27 billion for forestry programs, including $14 billion for reducing hazardous fuel treatment and billions more for forest restoration.