President Joe Biden’s effort to amass partners for challenging China is taking shape, and U.S. Trade Representative Katherine Tai is working to rekindle ties with historical allies such as Japan, the European Union and the United Kingdom while forging new bonds with countries such as India and Vietnam.

“We need to stand up together — Europeans and Americans — on the Uyghur issue, on Tibet and on Hong Kong and Taiwan,” Nicholas Burns, Biden’s nominee for U.S. ambassador to China, told the Senate Finance Committee recently. “And we need to be together on trade because both of us together are victims of Chinese unfair trade practices. Think of the power of the EU, the U.S. and perhaps Japan, working together.”

Details of a Biden strategy that the U.S. ag sector hopes will lead to a more stable trading relationship with China are unclear. But the strategy is expected to include tariffs there are still in place from the Trump administration as well as foreign allies and the World Trade Organization.

Tai has spent the past week in Asia, intensifying the Biden administration’s race to gather allies to confront China over grievances of free market abuses, intellectual property rights violations and a host of other complaints.

Her participation Tuesday in the first U.S.-India Trade Policy Forum since 2017 capped a whirlwind week that started in Tokyo when she met with a host of high-ranking Japanese officials, including Hagiuda Kōichi, the country’s minister of economy, trade and industry. It was in Tokyo where Tai and Kōichi launched the U.S.-Japan Partnership on Trade — an initiative to reaffirm “the shared commitment to strengthen this alliance through regular engagement on trade-related matters of importance to both countries.”

Executive Vice President of the European Commission Valdis Dombrovskis joined Tai and Kōichi in Tokyo, and together they announced the resurrection of their “trilateral partnership to address the global challenges posed by nonmarket policies and practices of third countries” — an effort primarily aimed at countering China and its industrial subsidies. 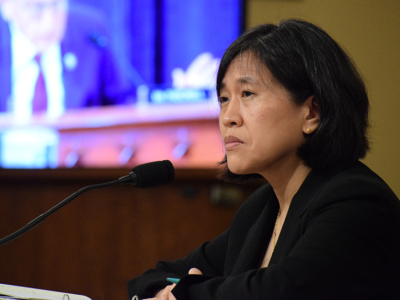 USTR Katherine Tai From Tokyo, it was on to Seoul, where Tai and South Korean Trade Minister Yeo Han-Koo celebrated the U.S.-Korea Free Trade Agreement, a 9-year-old pact that helped spur a significant increase in U.S. beef exports.

But Tai has made it clear that it is a priority to build new trade ties with India, a democracy home to 1.4 billion people that has clashed with China on the countries’ shared border.

The U.S. is even finding new support from Mexico in countering China’s reach.

“Economic integration, in full respect for our sovereignty, is the best instrument to face the competition stemmed from growth in other regions of the world, especially the productive and commercial expansion of China,” Obrador said at the White House last week during a summit of North American leaders convened by Biden. “We must not forget that while Canada, United States, and Mexico account for 13% of the world market, China (accounts for) 14.4% percent.”

Ag leaders say they are pleased the Biden administration is building closer ties with trading allies, but it is still unclear how the strategy will result in a more stable trading relationship with China, the largest ag importing country in the world that is still technically in a trade war with the U.S.

Those tariffs are at the core of the damage and uncertainty that is marring the U.S. trade relationship with China, which imported $26.5 billion worth of U.S. ag commodities in 2020.

The U.S. imposed tariffs on $550 billion worth of Chinese goods from the summer of 2018 to the summer of 2019, and China retaliated with duties on $180 billion worth of U.S. goods — most of which were agricultural commodities like soybeans, corn and pork. Those tariffs don't include the U.S. and Chinese duties tied to China’s steel and aluminum exports, which also resulted in tariffs on U.S. farm goods.

Neither the U.S. nor China agreed to lift tariffs as part of the "phase one" trade pact that the countries signed in January of last year, but since then China has been granting ad hoc exclusions to the duties for Chinese importers. Those decisions, together with a Chinese pledge to buy billions of dollars worth of U.S. ag commodities, have allowed U.S. exports to reach record levels for some commodities in 2020 and 2021. The Chinese commitment expires on Dec. 31 and there is no requirement for China to continue to grant the exclusions.

China has asked the U.S. to remove the tariffs, but so far Biden has refused, opting to keep the leverage in place.

"The administration has been clear that it wants to work with allies to confront China, and it has announced several new alliances to that end — the revived subsidies work with the EU and Japan, the focus on a new economic framework for the Indo-Pacific, the U.S.-EU Trade and Technology Council, etc.,” said Darci Vetter, vice chair for agriculture and food at Edelman, a public relations firm, and former chief ag negotiator for the U.S. Trade Representative during the Obama administration.

“The question is when and whether the combination of these new alliances will provide a substantive, coordinated response to China's unfair trade practices that would allow the United States to move away from the bilateral tariffs that have been so painful for U.S. agriculture."