With Congress weighing new policy incentives for sustainable aviation fuel, United Airlines flew a 737 into D.C. with one of the jet’s two engines running solely on the biofuel.

At a reception afterwards in a Reagan Airport hangar, United CEO Scott Kirby described the flight as history-making and called on Congress to pass the incentives the industry needs to increase SAF production.

United billed the trip from Chicago as the first passenger flight on 100% SAF. But FAA standards limit SAF to 50% of a plane’s fuel load, so the second engine was operating on conventional jet fuel. The passengers included Kirby and a number of industry officials.

Tanking up with biofuel at Chicago O’Hare. (United photo) 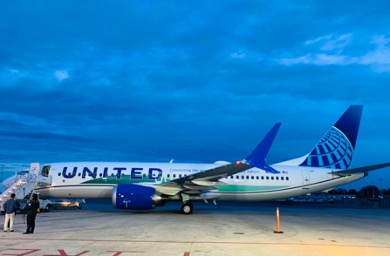 Parked at DCA outside United reception.

The massive Build Back Better bill that Congress is considering would create a temporary tax credit for SAF and replace it with a broader “clean fuel” tax credit for which biomass-based diesel also would be eligible. A separate defense bill would authorize a pilot program in SAF production.

Take note: The biofuel used in the United 737-MAX 8 was produced by World Energy, a long-time biodiesel producer that operates a California refinery that makes SAF from waste fats and used cooking oil. Many other SAF feedstocks are under consideration in the industry, ranging from corn stover to oilseed cover crops.

The fuel for the United flight included synthetic aromatics made from Iowa-produced corn sugar. The aromatics make the fuel identical to petroleum-based jet fuel.

By the way: Two lawmakers were on the flight, including Brad Schneider, an Illinois Democrat who is one of the industry’s key allies.

The Commerce Department is recommending countervailing duties on urea ammonium nitrate imports from Russia and Trinidad and Tobago on the basis that the products are unfairly subsidized. The department made a preliminary determination in favor of a complaint filed by CF Industries.

“Given the crippling effect these tariffs have had on farmers, it’s deeply disappointing to see that the U.S. Commerce Department and CF Industries would continue to press for more tariffs,” said NCGA President Chris Edgington.

What’s next: The Commerce Department will impose preliminary cash deposit requirements on the affected UAN imports.

Fertilizer prices have been running at all-time highs for a variety of reasons and will likely remain elevated at least through the spring planting season, according to a new report from CoBank. The benchmark Green Markets North American Fertilizer Index has risen 265% since May 2020.

The high prices are likely to spur farmers to plant a few more soybean acres in 2022, but the report doesn’t see a major shift away from corn.

But, but, but: Looking beyond 2022, farmers may move more heavily into soybeans because of the increased demand for renewable diesel, the report says. 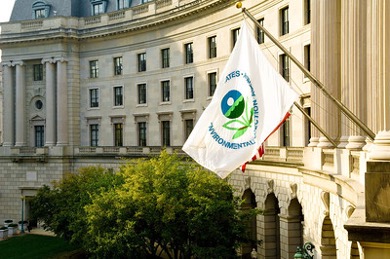 Nominees to lead key areas of EPA’s operations have advanced through the Senate Environment and Public Works Committee over Republican opposition.

Take note: The committee’s top Republican, Shelley Moore Capito of West Virginia, said her main objection to the nominees was EPA’s “lack of timely responsiveness” to her requests for information on issues such as how national carbon reduction pledges are being calculated.

Lock and Dam No. 25 on the Mississippi River near St. Louis is more than 80 years old and in need of renovation, so farm-funded groups are joining to try to get the work started by injecting $1 million into the process.

Take note: The recently enacted bipartisan infrastructure bill provides $2.5 billion for navigation projects. Lock and Dam 25 is first in line for money and ready for construction immediately, according to the Waterways Council.

Reps. Tracey Mann, R-Kan., and Jimmy Panetta, D-Calif., are forming a congressional caucus dedicated to strengthening the relationship between Capitol Hill and ag education classrooms across the country.

The two representatives today will announce the formation of the Congressional FFA Caucus, which aims to “raise the profile of school-based agricultural education, FFA, and the next generation of leaders in food and agriculture,” the lawmakers said.

She said it. “We shouldn’t be pricing the cost of fluid milk on the price of cheese in Chicago. It’s just dumb.” - Senate Ag Committee member Kirsten Gillibrand, D-N.Y., introducing a bill that would require USDA to hold hearings on possible changes to how milk is priced in the federal marketing order system.

Gillibrand said the government needs to “start from scratch” and design a new pricing system.