Senate Majority Leader Charles Schumer has reiterated his goal of getting the Build Back Better bill through the chamber before the end of the year.

In a Dear Colleague letter, Schumer says eight of the 12 Senate committees submitted their changes to the House-passed BBB bill on Friday and Saturday. Agri-Pulse has reported that the Senate Ag committee’s new text would add more than $2 billion in funding for conservation technical assistance to the legislation.

Schumer, D-N.Y., says the goal is to finalize all of the committee sections of the bill over the course of this week and next following meetings with the Senate parliamentarian. He says he’s confident that senators will have ample time to review the text and cost estimates.

But, but, but: The question remains when and whether two key Democrats, Joe Manchin of West Virginia and Kyrsten Sinema of Arizona, agree to support the bill. 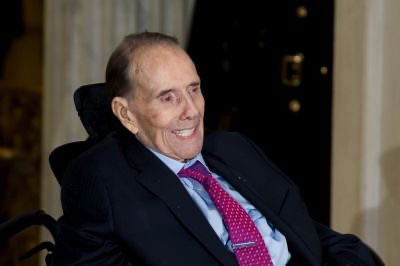 Dole to lie in state

The late Sen. Bob Dole will lie in state in the Capitol Rotunda on Thursday. “Dole exemplified the greatest generation, and while I never had the pleasure of serving in the Senate with him, his reputation and his achievements, and most of all his character preceded him,” Schumer said.

The Food Research & Action Center paid tribute to Dole with a statement praising his work on improving food assistance programs, from his initial work on the Supplemental Nutrition Assistance Program to the founding of the McGovern-Dole international school feeding programs.

“For more than 35 years, Senator Dole tirelessly worked across the aisle to champion anti-hunger programs in the U.S. and abroad,” said FRAC President Luis Guardia.

British Secretary of State for International Trade Anne-Marie Trevelyan will be in Washington today, where she is scheduled to meet with U.S. Trade Representative Katherine Tai.

In a statement released before the meeting, Trevelyan said, “We've already made strong progress, from getting British beef and lamb back on U.S. plates, to lowering the cost of Scotch whisky exports by addressing the long-running Airbus-Boeing issue. Now is the time to hit the ground running and get on with boosting ties with our closest ally.”

The U.S. and UK began negotiating a free trade agreement in the final year of the Trump administration, but those talks have not restarted under the Biden administration.

USDA is accepting applications under a new program that will award up to $400 million to support locally grown foods.

The funding will be awarded through non-competitive cooperative agreements with state and tribal governments “to support local, regional, and socially disadvantaged farmers and ranchers through the purchase of domestic local foods,” the Agricultural Marketing Service said.

Local and regional farmers and ranchers are defined as those within the state or territory or 400 miles of the delivery destination.

Also on Monday, USDA’s Food and Nutrition Service announced the availability of up to $50 million provided by the American Rescue Plan for The Emergency Food Assistance Program (TEFAP) Reach and Resiliency Grants to state agencies to expand program access in rural, tribal, and other currently underserved areas.

It’s too dry in southern Brazil, threatening soybean fields in the states of Mato Grosso do Sul and São Paulo, according to a new analysis released by the consulting firm AgRural.

Most of the states have been fully sown for this year’s crop and the plants are now very susceptible to unusually arid conditions. Rain totals for November in the southern states have been lower than normal, and the dryness is expected to continue through the first half of December.

About 94% of Brazil’s soybean fields have been planted. Some farmers in the extreme southern states of Rio Grande do Sul and Santa Catarina have not yet planted because of persistent dryness, says AgRural.

Crops are looking good in the rest of the country and harvest is expected to begin around Christmas in the largest soybean-producing state of Mato Grosso.

NASS seeks information on producer involvement in ag for census

USDA’s National Agricultural Statistics Service is mailing a survey this month to more than 1 million potential producers to determine whether they are involved in agricultural activity.

The National Agricultural Classification Survey “is one of the most important early steps to determine who should receive next year’s Census of Agriculture questionnaire,” Ag Census and Survey Division Director Barbara Rater said. “Every response to NACS is vital.”

A farm is defined as USDA as “any place from which $1,000 or more of agricultural products are produced and sold, or are normally sold, during the year,” NASS said.

“The definition of a farm is not based on size, type, or location,” Rater said. “A farm can be an urban rooftop or a backyard greenhouse. It can be large pastures of cattle or fields of corn, as well as blooms, honey, vegetables, or eggs sold to neighbors, friends, and family.”

The Environmental Protection Agency and Army Corps of Engineers have officially published their proposal to establish a “foundational rule” defining “waters of the U.S.” under the Clean Water Act.

The agencies said they were taking the action “in order to ensure necessary federal protections for the nation’s waters.” The “familiar pre-2015 definition … has bounded the [Clean Water] Act’s protections for decades, has been codified multiple times, and has been implemented by every administration for the last 35 years, from that of Ronald Reagan through Donald Trump,” they said in the proposal.