Sen. Joe Manchin is showing no sign of compromising on President Joe Biden’s Build Back Better bill, vital as it may be to the administration’s climate policy.

The West Virginia Democrat, whose vote is essential to passing the bill, announced his opposition to the House-passed legislation Dec. 19. But BBB supporters are holding out hope that they can get him to back a scaled-back version of the measure.

But if Manchin’s going to cut a deal on a smaller bill, it was hard to tell Tuesday when he stopped to answer questions from reporters. “I’m not going to talk about Build Back Better anymore, because I think I've been very clear on that. There (are) no negotiations going on at this time,” he said.

Keep in mind: Manchin gave his answer in response to a question about whether he could support the BBB bill if an extension of the expanded child tax credit was left out. Dropping that tax credit would be a big loss for progressives.

Manchin went on to say, “Our country is divided, and I don't intend to do anything that divides our country anymore.” That statement doesn’t leave a lot of room for passing a bill that Republicans strongly oppose.

By the way: Manchin also reiterated his concern about weakening the Senate filibuster rules. Democratic leaders want to make an exception for a voting rights bill. Manchin says any significant change to the rules should have Republican support.

For more on the BBB bill and other ag items on Congress’ 2022 agenda, read our weekly Agri-Pulse newsletter. We also preview regulatory and trade issues facing U.S. agriculture this year and examine how new beef processors could face a challenging cattle market. 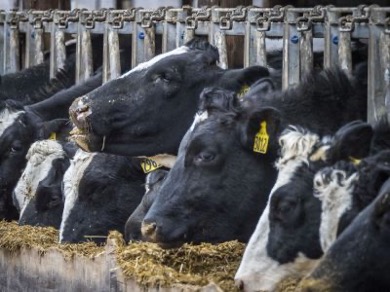 Score one for the U.S. dairy industry. In the latest turn in a long-running trade battle, a three-member dispute settlement panel ruled that Canada is in violation of its quota agreements under the U.S.-Mexico-Canada Agreement. It was the first such decision by a dispute panel under the USMCA.

According to Reuters, the Biden administration expects Canada to resolve the issue by the Feb. 3 deadline for it to be in compliance. A spokesperson for the Canadian trade ministry told Reuters it would ensure compliance with the ruling.

If Canada doesn’t comply, the U.S. can initiate a retaliatory tariff process, according to the National Milk Producers Federation.

By the way: Canadian cheese importers are also pleased with the decision. International Cheese Council of Canada Chairman Patrick Pelliccione said he “looks forward to Canada living up to all the obligations it has committed to in the USMCA.”

Food groups back stay of vax mandate for businesses

Trade groups representing the U.S. food industry and other businesses are urging the Supreme Court to halt implementation of the federal vaccination mandate affecting companies of 100 or more employees.

The court is scheduled to hear oral arguments Friday in the case, which also involves the Occupational Safety and Health Administration’s mandate for health care workers.

FMI-the Food Industry Association, the International Food Service Distributors Association, American Bakers Association and National Association of Convenience Stores, as well as grocers in Ohio and Tennessee joined in a brief led by the National Federation of Independent Business seeking a stay.

They argued that “Congress did not clearly authorize OSHA to commandeer businesses into implementing a vaccine, testing, masking, and tracking mandate for 84 million Americans” and said recent COVID guidance from the Centers for Disease Control and Prevention conflicts with the mandate.

On the other side: A brief submitted by the AFL-CIO and other unions calls for keeping the mandate in place. Among the unions on the brief are the United Food and Commercial Workers International Union.

Ahead of a committee vote next week, the White House has formally sent the Senate the nomination of Robert Califf to be FDA commissioner, a position he held in the last year of the Obama administration.

Califf received a generally positive reception during his confirmation hearing before the Health, Education, Labor and Pensions Committee last month, but Sen. Bernie Sanders, I-Vt., said Califf is too close to the pharmaceutical industry. The committee is scheduled to vote on Califf next Wednesday.

India, in an effort to prevent the hoarding of soymeal and price spikes, has set temporary limits on how much processors and traders can stockpile, according to USDA’s Foreign Agricultural Service.

Until June 30, processors will be allowed to store only enough soymeal for 90 days of feed production. Government trading operations are limited to a maximum stock of 160 metric tons.

India took the unusual step last summer of opening its market to more than a million tons of U.S. soymeal despite the country’s aversion to feed products made from genetically modified crops. The move was seen as a response to demands from India’s poultry and pork producers, who were suffering from tight supplies and rising prices.

He said it. “No worries, I’m actually used to API getting to go first.” - Renewable Fuels Association President and CEO Geoff Cooper, after an official running an EPA public hearing Tuesday accidentally called on an American Petroleum Institute speaker to testify ahead of him.