A familiar voice in farm policy is reflecting changes in its industry as the 30-year-old National Biodiesel Board plans to change its name – and shift its focus – to place more emphasis on a broader effort to use liquid transportation fuels in carbon reduction efforts.

The new moniker, announced Tuesday at the group’s annual convention in Las Vegas, comes as the industry faces sweeping changes in the demand for its products as corporations and consumers seek to reduce their carbon footprints.

Clean Fuels Alliance America will look to expand use of biodiesel, renewable diesel and sustainable aviation fuel. Over the last 30 years, NBB – which was called the National SoyDiesel Development Board – has advocated for its signature product. But the push for more renewable diesel and SAF – not to mention the growth in the companies producing those fuels – meant a broader name and approach was needed.

“The objective is really to keep this industry together speaking with one voice,” Clean Fuels CEO Donnell Rehagen told reporters Tuesday. “As it grows, we need that to grow within the Clean Fuels Alliance. So we will be out talking to some of the companies out there just now entering this space and helping them understand what we bring to the table, and inviting them to be part of this messaging going forward.”

Before the rebrand was announced, the industry was already on an accelerated timeline for the production goal it set just two years ago.

Then, at the group’s gathering in Tampa, Florida, in 2020, Rehagen announced a goal to achieve six billion gallons of annual production by 2030. Now, he says that timeline is being outpaced.

“With some of the announced plants and some of the construction going on as we speak,” he said, “I’m going to guess we’re going to hit a six billion gallon market (in) probably 2024, 2025.” 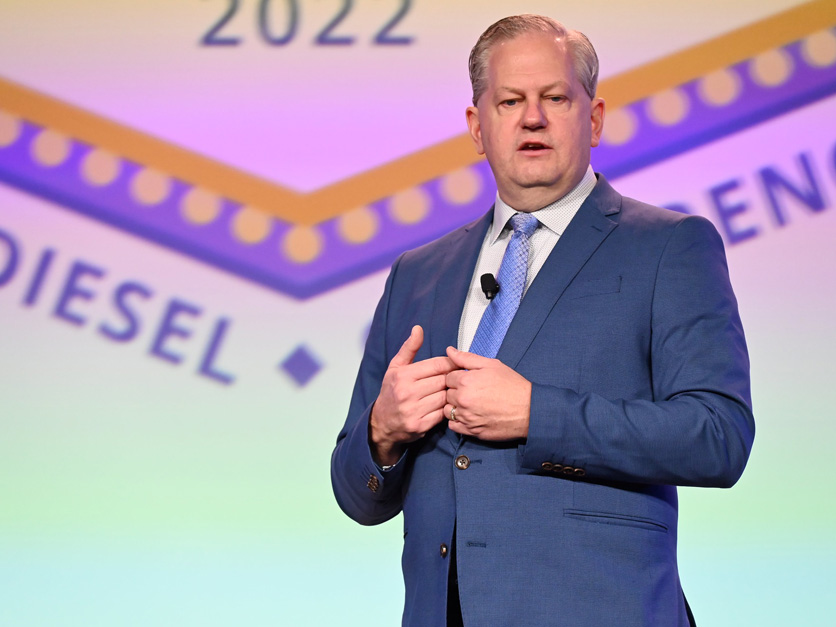 Clean Fuels CEO Donnell RehagenRehagen pointed to an expansion of renewable diesel production capacity – with more announced capacity on the way – as a big reason the mere two-year-old timeline might not be ambitious enough anymore. The SAF space is also a big growth market for the industry; the Biden administration has expressed interest in growing the space and the U.S. airline industry says it plans to use three billion gallons of the fuel by 2030.

Rehagen was quick to say the rebrand does not mean the industry plans to move away from advocacy for biodiesel. In fact, he said it is “going to be the foundational piece of our industry going forward.” But the potential for new demand from renewable diesel and SAF cannot be ignored, especially as consumers in the United States and all over the world look for ways to reduce their carbon footprint.

While it’s not like the organization has ignored the possible benefits of feedstocks other than soybeans – other plants or even animal fats, for example – the rebrand and new focus will also position the group to offer alternatives to the electrification push currently underway among some corners of government and throughout the transportation space.

For their part, Rehagen and other industry advocates say their products can offer immediate carbon reduction and come with fewer ancillary concerns about battery power and manufacturing.

“It’s going to be a lot easier to find more lipids than it is to find more lithium, so think about that when you’re comparing choices,” Cynthia Warner, president and CEO of the Renewable Energy Group, said during a panel discussion with other industry leaders.

A new focus will also mean a slight tweak to the organization’s lobbying strategy.

Both Rehagen and Kurt Kovarik, who heads up the group’s Washington office, said many of the organization’s policy goals will remain the same. Renewable diesel and SAF both offer similar issue areas to the more familiar biodiesel, and Clean Fuels plans to be more intentional about their inclusion in the organization’s policy book and their industry’s production goals.

One such area where this focus has already been on display was during the discussion over industry incentives to tuck into the Build Back Better reconciliation package in 2021. The bill, which is currently stalled on Capitol Hill, contained a provision to phase an industry tax credit to a more technology-neutral subsidy after four years. Then NBB raised concerns about co-processed biofuels potentially qualifying for the tax incentive before the planned transition and also wanted to make sure conventional biodiesel production qualified after the transition took place.

In an interview on the sidelines of the event, Kovarik said he was encouraged by the ongoing conversations about the future of Build Back Better, as well as the general popularity of the parts of the bill important to the industry,

“There’s still a lot of support for the clean energy and climate provisions in this bill, particularly those that utilize the tax code to incent it,” he said.

What’s more, he said the rebrand might open doors to a wider array of Hill offices, providing an opportunity for the group to find more supporters beyond stalwarts like Sen. Chuck Grassley, R-Iowa.

“We may have members on the East and West Coast who are a little more open now to hearing our story on climate, on carbon reduction, on environmental justice as Clean Fuels Alliance rather than National Biodiesel Board,” he said. “If they’ve got a predetermined notion of what the National Biodiesel Board is as a midwestern ag organization, maybe they’re a little less inclined to be a champion for us.

Kurt Kovarik, Clean Fuels “I think this change gives them an opportunity to take a new look and say ‘what are they producing, where is it going, what does it mean to my community?’,” Kovarik added. “There might be a new openness to engage with us, hear us out.”


The growth of the industry – and corresponding growth in soybean demand – is certain to be a hot topic for years to come as farmers look to adapt. Many Corn Belt producers plant corn and beans based on an agronomic rotation as much as on market conditions, but existing tight soybean supplies and burgeoning demand could introduce economic factors into those rotations.

Many facilities have been announced to process U.S. soybeans in anticipation of looming market demand from biodiesel, renewable diesel and SAF expansion. But as Mac Miller, vice president of market intelligence for the United Soybean Board, notes, the industry has plenty of time to figure that out.