President Joe Biden is looking to Congress to pass portions of his Build Back Better bill, specifically naming the legislation’s climate measures. Those include about $80 billion in agriculture provisions.

"I'm confident we can get pieces, big chunks, of the Build Back Better law signed into law,” he said at a wide-ranging news conference Wednesday.

A few minutes later he said, “It’s clear that we would be able to get support the $500-plus billion for energy in the environment.”

We reported last week that Senate Agriculture Chairwoman Debbie Stabenow, D-Mich., was looking at moving the ag provisions as part of a climate package that would also include new tax incentives for biofuels.

By the way: Biden repeated his administration’s attacks on the nation’s largest meatpackers. However, Biden noted that the industry had been consolidated long before the COVID-19 pandemic and the retail price spikes happened in the wake of that.

Packers “pay ranchers less for the cattle they grow and charge more for the beef and hamburger meat that people buy,” Biden said.

Earlier Wednesday, witnesses and lawmakers at a House hearing on rising consumer food prices diverged sharply on the causes. Democrats, and their witnesses, blamed market consolidation and greed. Republicans and their invited witnesses pointed to pandemic-related spending and regulations.

Like Biden, Democrats on the House Judiciary Committee’s antitrust subcommittee singled out meatpackers for criticism.

“While prices are rising, corporations are seeing record profits — demonstrating that they are not absorbing the supply shocks exacerbated by the pandemic,” subcommittee chair David Cicilline of Rhode Island said. “Instead, they are taking advantage of the American people to line their pockets in the midst of this crisis.”

Conservative take: Peter St. Onge of the Heritage Foundation told the lawmakers that “the data strongly suggest that food production, in particular meatpacking, is among the most competitive and efficient industries in America — indeed, in the world.”

Democrats called for stronger antitrust enforcement, and Cicilline even raised the possibility of price controls to address inflation.

Outside the hearing: A new study from the University of Arkansas says a bipartisan market reform bill that Biden administration officials have spoken favorably of could “decrease Arkansas cattle prices, reduce incentives to improve cattle quality in Arkansas, and shrink the size of the Arkansas cattle industry.”

Why it matters: The analysis is one of several solicited by GOP aides to the Senate Ag Committee. Arkansas Sen. John Boozman is the panel’s top Republican.

Julie Anna Potts, president and CEO of the North American Meat Institute, wrote an Agri-Pulse op-ed on the industry concentration issue this week. 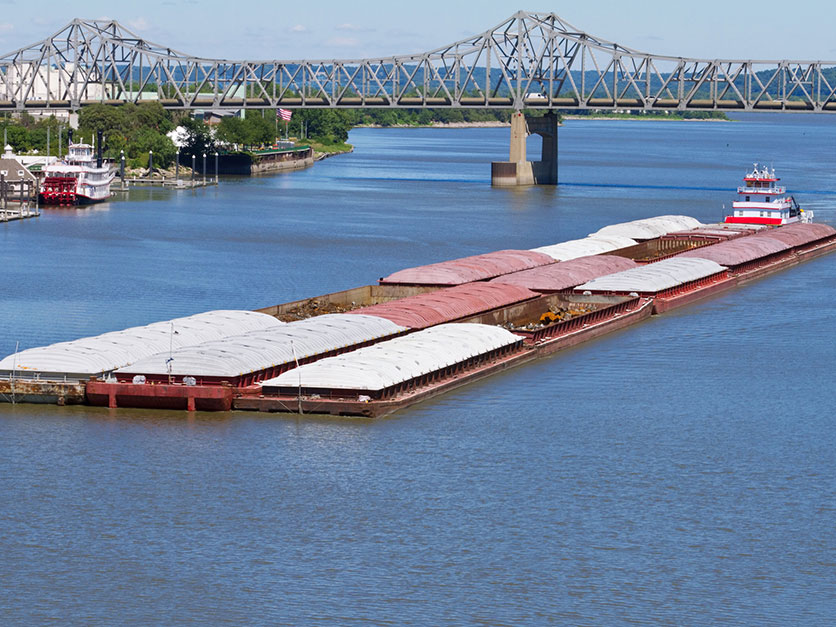 Fifteen years after being authorized by Congress, the first construction dollars are set to flow for rehabilitating locks and dams on the Mississippi River.

The Army Corps of Engineers’ initial plan for spending from the bipartisan infrastructure bill earmarks $732 million for construction of Lock and Dam 25 near St. Louis. It is the southernmost of seven aging locks and dams that Congress in 2007 authorized for rehabilitation. The project will add a 1,200-foot lock chamber, twice as long as the existing one at the facility.

The Biden administration has started talks with the U.K. to end U.S. tariffs on British steel and aluminum as well as the British retaliatory tariffs that affect some U.S. agricultural goods. The U.S. already reached such a deal with the European Union.

The U.K. announced its separate retaliatory tariffs when it exited the European Union. They include taxes on U.S. wheat, corn, wine, grapes, orange juice, tobacco, chocolate, whiskey and frozen lobsters.

The U.K. welcomes the Biden administration’s “decision to work at pace towards a joint resolution on steel and aluminum tariffs,” said a spokesperson for the British Department for International Trade.

The 21-year-old African Growth and Opportunity Act, a law that gives special U.S. trade access to some Sub-Sahara African countries, expires in 2025, and House Ways and Means Committee Chairman Richard Neal, D-Mass., says he wants a comprehensive report from the International Trade Commission as Congress considers its future.

The trade program suffered some controversy recently when the U.S. decided to kick out Ethiopia, Mali and Guinea. The U.S. accuses Guinea and Mali of “gross violations of internationally recognized human rights” and the Ethiopian government of atrocities in the Tigray region.

Agricultural exports of citrus, grains, nuts, coffee, sugar and fruits and vegetables from African countries such as Ghana, Nigeria and South Africa have grown substantially under AGOA, according to the Brookings Institution.

Fewer than 1% of the fruits and vegetables tested in 2020 had pesticide residues exceeding EPA-established tolerances, and 30% of the samples had no detectable residue, according to USDA’s latest annual pesticide data report.

The findings “illustrate that residues found in agricultural products sampled are at levels that do not pose risk to consumers’ health and are safe according to EPA and FDA,” the report says.

The 9,600 samples were collected from 10 states — California, Washington, Texas, Colorado, Michigan, Ohio, New York, Florida, North Carolina, and Maryland. Most were fresh fruits or vegetables, but about 1,700 were processed products.

The report found some pesticides more frequently in imported than domestic samples.

He said it. “We do believe there is a lot of pandemic price gouging that is taking place.” - House Democratic Caucus Chairman Hakeem Jeffries, D-N.Y., at a news conference Wednesday, blaming food companies and meat processors for food inflation.