A coalition of agricultural groups is pleading with lawmakers and Gov. Gavin Newsom for relief from the state’s COVID-19 paid sick leave requirements. Calling the new law an “extreme action” that hurts employers, the coalition is pressing for a payroll credit and reimbursements similar to previous federal provisions.

“The ag industry cannot pass this cost on at all,” said Manuel Cunha, president of the Nisei Farmers League, after raising the issue last week in a meeting of the State Board of Food and Agriculture. “The cost is huge.”

In February Newsom signed Senate Bill 114 into law. It requires employers with 26 or more workers to provide up to 80 additional hours of sick leave if an employee is exposed to COVID-19 or must take care of a family member who tested positive. The coverage period extends retroactively from Jan. 1 and expires on Sept. 30.

The California Chamber of Commerce called the proposal “a balanced approach to protect both workers and our economy.” President and CEO Jennifer Barrera said the governor’s office considerably improved the measure after hearing CalChamber’s concerns, making the proposal “far more affordable and manageable.”

Among those changes, it exempts small employers, and businesses can ask for proof of a positive test after 40 hours leave. CalChamber also pushed to limit recovery time for vaccinations to a 24-hour leave. The budget deal included an additional $1.9 billion for emergency COVID-19 needs. 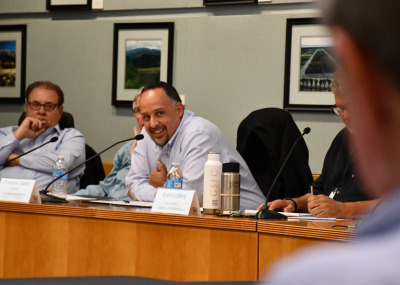 Chris Valadez, president of the Grower-Shipper Association of Central California

The California Labor Federation cheered the passage, saying it would support frontline workers, while Republicans called the measure rushed and worried it would still hurt small businesses.

The cost to an employer could add up to $1,200 for every employee earning minimum wage and have an industry-wide impact reaching hundreds of millions of dollars, argued Cunha. It follows “a rough two years for these farmers,” with port congestion, deepening drought and pandemic shutdowns. Cunha viewed the retroactive provision as also adding more burdens for employers, since they would have to track down paperwork from seasonal workers who have already left the region or state.

Farmers and farm labor contractors do not have this type of income to spend, he said, adding that restaurants, laundromats and other businesses can simply raise prices. Some growers may sell their fruit in June and wait 120 days to receive all of their funds from the buyer, he said.

Chris Valadez, a board member and president of the Grower-Shipper Association of Central California, pointed out that the state’s department for occupational health and safety, known as Cal/OSHA, already requires employers to supply exclusion pay for COVID-19 leave before an employee would access supplemental paid sick leave.

“There is a disproportionate impact,” said Valadez, reasoning that California’s small and medium-sized farms produce labor-intensive commodities. “It just requires a lot of people to produce these very essential, very critical jobs that keep the food system going in California, and throughout the nation and the world.”

Agricultural operations, he explained, have been among the businesses at highest risk for COVID-19 exposures due to the large number of employees on average and the need to maintain production to meet contract requirements.

The farm groups have shared their frustration with lawmakers sympathetic to the industry, beginning with Senator Anna Caballero of Salinas, who chairs the Senate Governance and Finance Committee, and Republican Assemblymember Jim Patterson of Fresno, who is vice chair of the Committee on Accountability and Administrative Review.

The federal government responded to such issues through tax credits for paid leave under the Families First Coronavirus Response Act in 2020 and the American Rescue Plan Act in 2021.

Under the coalition’s proposal, employers could petition the California Franchise Tax Board or treasurer’s office to recoup a portion of the costs. According to a letter the farm groups sent to Newsom and Agri-Pulse obtained, SB 114 “ignores [the industry’s] financial commitment to employees during the pandemic, and how tens of billions of surplus tax dollars in the state coffers could have mitigated this financial burden.” Those businesses, they argue, were providing supplemental leave through payroll credits before the state required them to do so, and they were supplying PPE, setting up vaccine clinics and testing workers.

“Once again, politics over common sense has led to the burdening of the private sector,” they claim. “Employers are confronted with yet another new law with several shortcomings.”

The letter pushes for a face-to-face meeting with Newsom “to find common ground and move forward collectively and positively.”

CDFA Secretary Karen Ross acknowledged the issue “has been discussed at various levels,” and Valadez appreciated the debates among policymakers.

“But it's an extremely important issue that can devastate and critically impact many farms of many sizes that we just need to be cognizant of,” said Valadez. “It's not going to go away.”