Gov. Gavin Newsom’s budget proposal for the coming year reflects his priorities for pushing California back into a leadership role for climate policy while responding to numerous challenges. For agriculture, this translates to a bump in funding for drought response and new dollars to update the state’s ports to mitigate ongoing congestion.

With an estimated budget surplus of $45.7 billion, the administration is pitching a $22 billion climate package focused largely on upgrading charging infrastructure to meet the state’s ambitious goals for zero-emission vehicles (ZEVs) and for supporting clean energy projects.

Within the climate package is $750 million for drought response, adding to the $5.2 billion commitment over three years that the state approved in the 2021 budget. The largest portions of the new funding would go to urban and small water providers for conservation programs, with $180 million, and to shore up drinking water supplies, with $145 million. Responding to significant population declines for fish and wildlife, the budget would allocate $75 million to mitigate the damage to natural systems.

As land fallowing intensifies during the drought and in response to new plans for the Sustainable Groundwater Management Act, the budget proposal would supply $40 million for multibenefit land repurposing, adding to $50 million in the previous budget. Another $30 million would support groundwater recharge and $20 million would supply grants for on-farm water conservation projects.

The administration is proposing to help small farmers with $10 million aimed at “mobile irrigation labs,” land use mapping and other technical assistance. The budget also sets aside $250 million to spend after more data on the current water supply is gathered this spring.

California is set to receive another $14 billion in federal infrastructure investment over the next five years through the Infrastructure Investment and Jobs Act. The state is also allocating the second and final installment of $100 million for repairing conveyance canals in the San Joaquin Valley as part of the 2021 budget. 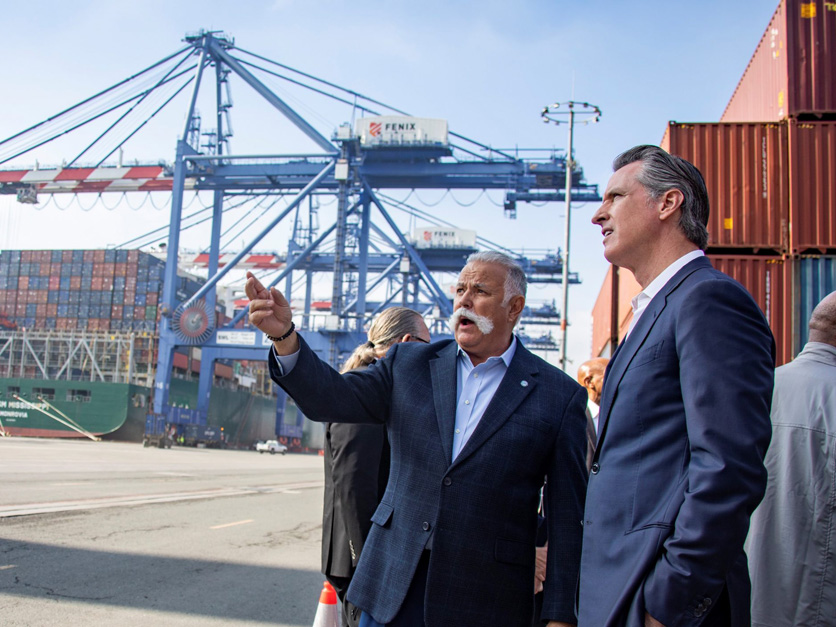 Newsom tours the Port of Los Angeles in November.

California Farm Bureau President Jamie Johansson commended Newsom’s attention to drought and the need for more water investment, along with the proposed boosts to farm-to-school initiatives and climate research.

“At a time when food prices are soaring and inflation and shortages are no longer speculative, it is critical that we shore up the farm economy,” said Johansson. “As they say though, the devil is the details, and we need to ensure that the famers who are supposed to benefit from these programs have a voice in the enactment of them.”

“But with no additional money for water storage, the budget is still not serious about addressing California’s food and water security,” Grove said. “I hope the governor understands we can’t import 100% of the food the Central Valley grows.”

The package has clean energy priorities that intersect with agriculture as well. One of those is incentivizing energy efficiency and renewable technologies in food production facilities, supported with $85 million in grants.

The administration is making plans for a “Lithium Valley,” which would support battery production for ZEVs and clean energy by promoting lithium extraction in the Salton Sea region. Communities have suffered toxic air quality impacts from the receding lake as costs have continued to rise for restoring the ecosystem, after agricultural runoff to the lake dried up in recent years due to water conservation efforts.

The climate package adds $30 million for expanding the administration’s farm-to-school program, which has been a priority for First Partner Jennifer Siebel Newsom. The California Climate and Agriculture Network and billionaire hedge fund manager Kat Taylor, a top Newsom contributor, applauded the spending as part of a $480 million package that also covers school kitchen modernization and hiring nutrition professionals.

Newsom orders action on port congestion, but trade groups want more
What to expect in Newsom's budget for climate and drought

The budget is continuing a $1.1 billion investment in climate-smart agriculture programs enacted in the 2021 budget, though the proposal adds few new dollars. A program for upgrading agricultural equipment with lower emission engines is set to receive $150 million, and livestock methane programs are promised $48 million. CDFA’s Healthy Soils Program would have a sizable $85 million under the plan, adding to the administration’s focus on nature-based solutions for climate mitigation and biodiversity conservation under its 30x30 commitment to preserve 30% of California’s land and coastal waters by 2030.

The Newsom administration has shied away from its aggressive stance on increasing the mill assessment for pesticide sales. CalEPA Secretary Jared Blumenfeld took heat last year from ag commissioners and the industry for slipping a mill tax overhaul into the budget. The Senate later blocked the proposal but agreed to fund a feasibility study on how to introduce such a proposed tiered fee system based on toxicity.

The January budget proposal avoids any mention of the mill tax. Instead, it would boost enforcement within the Department of Pesticide Regulation through an additional $882,000. The 2021 budget included a two-year commitment of $35.5 million for promoting nontoxic pesticides, which is continued in the proposal.

A $1.2 billion spending plan for forest resilience and wildfire prevention drew praise from the California Cattlemen’s Association, particularly for the $482 million within the package dedicated to enhancing wildfire resilience. The funding could expand grazing and prescribed fire projects. Newsom highlighted in his presentation the valuable role grazing plays in forest health and fire resilience. Another $382 million is slated for strategic wildfire fuel breaks and $44 million for community hardening.

With port congestion slowing agricultural exports out of Southern California, the administration is pitching $2.3 billion to mitigate the crisis and support clean energy upgrades at the ports — slightly more than the losses California farmers bore during the peak of the crisis last year.

“We've talked a lot about ports as a nation and around the world — the supply chain constraints because of the pandemic,” said Newsom during a Monday press conference.

Nearly half the funding would boost capacity through railyard expansions, new bridges and zero-emission projects, and $875 million would support zero-emission infrastructure for equipment, short-haul drayage trucks and other needs. The administration is seeking to build a $110 million training campus and “cut down the red tape” to fast-track a backlog of commercial driver’s licenses. Another $30 million would help with more efficient cargo movement, reducing congestion and increasing volume.

Newsom is seeking to grant further relief from transportation costs through a “gas tax holiday,” leaning into calls from conservative and moderate lawmakers over the past year.

“Glad to see the governor finally embrace the Republicans’ call for a gas tax holiday,” said Senate GOP Leader Scott Wilk of Santa Clarita. “If he wants any other good ideas, he has my number. Good ideas shouldn’t have party lines.”

Newsom described it as “modest” relief of $523 million by deferring an inflation adjustment in July that would increase the gas tax. The governor also plans to expand business tax credits and pay off $3 billion in unemployment insurance debt, which GOP lawmakers have also requested as part of the budget.

As the budget process unfolds, the administration will work with lawmakers to flesh out further details and revise projections after Californians pay taxes in April and new revenues begin flowing into the state’s account. With the January budget proposal in hand, the California Farm Bureau and many other interest groups will be diving into advocacy priorities with state leaders over the coming months.

“Despite many years of programs and slogans to ‘save the farm,’ we continue to see less and less every year — and almost all those lost are small farms,” said Johansson. “We look forward to partnering on solutions that can help reverse these trends.”