Agriculture Secretary Tom Vilsack says it’s far too early to tell how much impact the war in Ukraine will ultimately have on consumers and global food supplies. While touring the exhibition of farm equipment on the National Mall Tuesday, Vilsack noted to reporters that 80% of what farmers harvested in Ukraine last year has already been shipped. 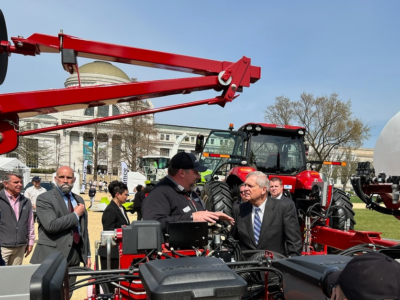 Vilsack inspects a corn planter on the Mall.

Ukraine used a special session of the World Trade Organization’s agriculture committee to charge that Russia is targeting Ukraine’s ability to feed both its own people as well those in countries that rely on its ag exports.

“Information gathered by Ukraine showed that Russia stole and blockaded cargo ships with grains from Ukraine ports and prevented humanitarian aid passing through and delivering food aid to people close to starvation.”

The Biden administration is announcing the release today of $2.9 billion in transportation funding authorized by the bipartisan infrastructure law. 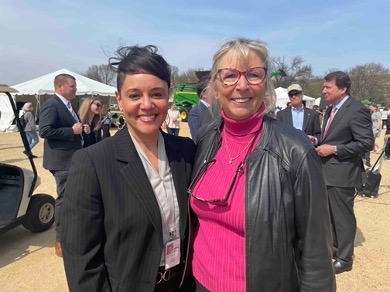 The funding will include $300 million in funding through the Rural Surface Transportation Grant Program. The law provides $2 billion through that program over five years. The grants can fund highway, bridge, and tunnel projects.

With the “major infusion of new funding, we have the capacity to green-light more transformational projects that will create good-paying union jobs, grow the economy, and make our transportation system safer and more resilient,” says Transportation Secretary Pete Buttigieg.

OSRA moves forward in the Senate

The Ocean Shipping Reform Act, which is intended to relieve port bottlenecks, has taken a crucial step forward, getting unanimous approval from the Senate Commerce Committee on Tuesday.

The sponsor of the bill’s House version of the bill, South Dakota Republican Rep. Dusty Johnson, tells Agri-Pulse he thinks the legislation will be a subject of negotiations over a much larger U.S. competitiveness measure.

By the way: An amendment the Commerce Committee added to its OSRA bill would require the transportation and commerce secretaries to provide annual reports and testimony on port issues.

Proposed requirements for corporations to disclose their progress on reducing the carbon footprint of their supply chains could push the ag sector and USDA to standardize the way ag emissions and carbon sequestration practices are measured. That’s the assessment of Tom Gorman with the law firm Dorsey and Whitney.

Gorman tells Agri-Pulse he expects the issue to come up in upcoming comments on the rule proposed by the Securities and Exchange Commission.

The disclosure requirements wouldn’t apply to companies that don’t have targets for reducing emissions. But Gorman says companies would have to think twice about scrapping existing climate pledges, “particularly in a context where many other firms will be making the disclosures.”

For more on OSRA's prospects and the SEC issue, read our Agri-Pulse weekly newsletter. We also have the latest on the battle over duties on Moroccan fertilizer.

Proponents of a Senate measure to reform the way cattle are bought and sold are close to releasing a new version of the bill.

The bill sponsored by Sens. Deb Fischer, R-Neb., and Chuck Grassley, R-Iowa, would create a system of regional cash trade minimums in the beef cattle industry.  The measure, which faces opposition from the American Farm Bureau Federation and National Cattlemen’s Beef Association, has been going through technical corrections at USDA and getting passed around offices on Capitol Hill. A Senate source tells Agri-Pulse the new version could be ready as soon as next week.

Grassley told reporters that the bill sponsors were “getting down to the selling of other colleagues and finding a process to move it.”

But, but but: Senate Ag Chairwoman Debbie Stabenow, D-Mich., has yet to sign off on a cash trade mandate. She said Monday “more accountability, more flexibility for farmers makes sense, so we have to figure out what that looks like exactly.” As for a cash trade mandate, “I don’t know where we’re going to end up exactly on that, so I need to see how it will work.”

The cost-share assistance would be available on all CRP contracts as long as grazing is included in the approved conservation plan.

The CRP Improvement Act also would increase the CRP annual payment limit from $50,000 to $125,000 to account for inflation and provide landowners with more CRP enrollment options. The limit has remained the same since the program was created in 1985.

The bill is essentially a marker for farm bill negotiations.

He said it. “By the way, we would also indirectly through you journalists in agriculture send a great big thanks to people like Boozman and Stabenow and to Vilsack.” - Sen. Chuck Grassley, R-Iowa, to reporters, crediting Stabenow, Vilsack and Senate Ag ranking member John Boozman with helping his cattle market reform bill.

Readers may recall that Grassley had accused Boozman’s staff of trying to sabotage the bill.