How a lawmaker stuck in House minority 'gets things done'

Dusty Johnson, the at-large Republican congressman from South Dakota, is finding some success despite being a member of the House minority party in only his third year in Congress.

Johnson is quick with a joke and laughs easily – someone his colleagues across the aisle call a “pleasant guy.” At the same time, he's chalked up a win on one piece of significant piece of legislation and could claim victory on another in coming weeks.

In Johnson's view, an aversion to the partisan mudslinging has helped him get Democratic support for his bills.

“This is not about ‘owning the libs’ on social media. There are times when messaging is important, and there are times where our friends on the left are profoundly wrong about the issues of the day,” Johnson said. “We’re not going to muzzle ourselves in calling those issues to the forefront, but we want to make sure we’re messaging these issues in a way that is responsible and productive and actually makes America stronger.”

One bill authored by Johnson in the House to create a cattle contract library and keep track of beef cattle sales in the U.S. was signed into law as a pilot project and funded through the fiscal 2023 omnibus spending package enacted earlier this month.

Another measure, the Ocean Shipping Reform Act authored by Johnson and his Democratic colleague John Garamendi of California, has been discussed favorably by the White House, and a version of the legislation is moving through the Senate. The version of OSRA Johnson co-sponsored passed the House overwhelmingly in December and then was adopted as an amendment to a sweeping competitiveness bill, the America COMPETES Act, that the House approved in February.

Former Democratic Rep. Collin Peterson of Minnesota, who chaired the House Agriculture Committee until losing re-election in 2020, told Agri-Pulse Johnson’s success on the two bills is no small feat.

“It’s pretty impressive, actually, especially given the climate,” Peterson said. “I’m not sure how he did it … I was there when Dusty came, and he was on the ball from the first minute he got there.”

“I assume what happened is he was willing to compromise and not want to have everything a certain way to get things done and there are not many people who will do that anymore … we need more people like him in Congress.”

Peterson believes it may be getting easier for a younger lawmaker to make their mark legislatively.

“It used to be a lot harder than it is now,” Peterson said. “You don’t have the old-timers on the committee that had been there forever … Some young whippersnapper was not going to come in and do anything – if you had a good idea, they would steal it from you … But then you’ve got the partisanship that’s going on between the two parties, that’s worse [now] than it was.”

Johnson’s affinity to work across the aisle is part of what scored him such early victories, Peterson said.

“I think he saw the opportunity; he’s worked hard to develop a relationship across the aisle and it paid off,” Peterson said.

Johnson said Congress is more bipartisan than voters may think.

“[On] the biggest issues of the day, from healthcare to immigration to the debt, we have a tendency to get trapped in our partisan talking points,” he added. “The supply chain is every bit as important as any of those, but I think John [Garamendi] and I have just purposefully decided to use the gameplan that works.”

Garamendi, who co-sponsored OSRA with Johnson, said working with Johnson is easy due to their shared backgrounds as regulators. Before coming to Congress, Johnson served on the South Dakota Public Utilities Commission from 2005 to 2011. 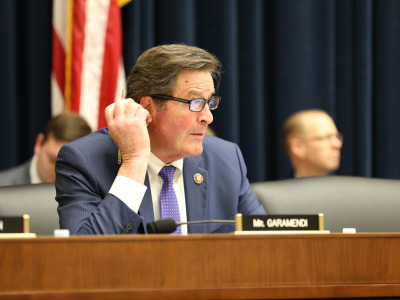 “We have a common background being interested in agriculture,” Garamendi, a former California insurance commissioner and the deputy secretary at the Interior Department during the Clinton administration, said in an interview with Agri-Pulse. “He was a state regulator and so was I, so we understand the proper and useful role of regulation and that made it very easy for us to work together … Besides that, I like him; he’s a pleasant guy to work with.”

Johnson and Garamendi are both members of the Problem Solvers Caucus, an evenly-split group of House Democrats and Republicans dedicated to working in a bipartisan manner. The caucus was founded in 2017, and Johnson currently serves as the group’s whip.

Johnson's focus on solutions and bipartisanship has caught the attention of industry groups.

“There is nothing symbolic about working with Representative Johnson,” said Jaime Castaneda, the executive vice-president of policy development and strategy for the National Milk Producers Federation. “He has been not only smart about the substance on the subject but smart about the process and smart about how to get things done.”

Castaneda said OSRA would help American ag industry get export-bound products off the docks and on the ocean.

For months, the ag industry has been frustrated by container ships leaving ports empty and heading back overseas to pick up more American imports. OSRA, in both the House and Senate versions, would give additional resources and authority to the Federal Maritime Commission to crack down on ocean carriers denying American exports and price-gouging shippers.

“It will put some additional teeth into the Federal Maritime Commission as well as additional resources,” Castaneda said. “So, once the president signs we hope there’s going to be immediate changes.”

Castaneda said Johnson, with Garamendi, got the wheels turning on OSRA.

"He, working obviously with a group of us, initiated this thinking, this concept of having legislation and making changes," Castaneda said. "It was a joint effort. Collectively, Rep Garamendi and Rep. Johnson were thinking about it, the coalition was thinking about it, and we all ... came to mind on 'we were both thinking about the same thing, let's work together on building this legislation.'"

Not everyone agrees Johnson’s bipartisan dealmaking on policy bills is a good thing. Johnson is the target of a primary challenge in South Dakota from Taffy Howard, a state representative campaigning on a platform aligned closely with former President Donald Trump’s unfounded claims that the 2020 election was stolen.

Howard’s campaign site says Johnson “votes to ignore voter fraud in Arizona and Pennsylvania,” “remains silent, backing Congresswoman Liz Cheney and her claim that any election fraud was a ‘big lie,’” and “votes against border security, joining Pelosi and the Democrats in opposing President Trump’s wall.”

Johnson voted in 2020 to override then-President Trump’s veto of the National Defense Authorization Act, vetoed after it did not include additional funding for a wall at the U.S.-Mexico border; and Johnson supported keeping Rep. Liz Cheney, R-Wyo., in her GOP leadership position before she was ousted for opposing Trump's claims of election fraud.

He also voted against objecting to electors sent from Arizona and Pennsylvania, after Trump claimed the results were fraudulent; there is no evidence after numerous recounts and audits that either slate of electors was fraudulently counted.

Howard also said she would push to bring back mandatory country of origin labeling and break up meatpacking conglomerates.

"I will work to pass legislation like country-of-origin labeling, which actually addresses the concerns of agriculture producers rather than pushing measures which don't do much more than grab attention," Howard said. "COVID highlighted serious issues with food security caused by allowing our cattle market to be controlled and monopolized by the top four meatpackers. We have to find a substantive way to break that monopoly, and that will be one of my top priorities in Congress."

In response to the primary challenge, Johnson contends the “massive silent majority of South Dakotans” appreciate the work he’s doing.

“According to polls and election results, [they] really like the work I’m doing,” Johnson said. “I think we have a tendency sometimes to give the loudest voices more attention than they probably deserve.”

Johnson said he has stuck by his word since being elected.

As for what’s next for Johnson, Peterson has some ideas.

Immigration is “the biggest issue in agriculture, by far,” Peterson said, referring to recent staffing shortages in ag production which have led to the industry calling for Congress to act on reforms allowing more workers in. “Maybe Dusty will take on that next, that’d be good.”

For more news, go to Agri-Pulse.