A closely watched group of economists have raised their forecast for farm income this year in the wake of the Ukraine crisis and the recent run-up in commodity prices. As a result, farm earnings are expected to be about the same this year as last, despite sharp increases in production costs.

The Food and Agriculture Policy Research Institute based at the University of Missouri now expects net farm income to reach nearly $120 billion this year, up from the March forecast of $105 billion. That increase accounts for increased production costs.

By the way: Consumer food prices are now expected to jump by 6.8% this year, up from the March forecast of 4.2%. 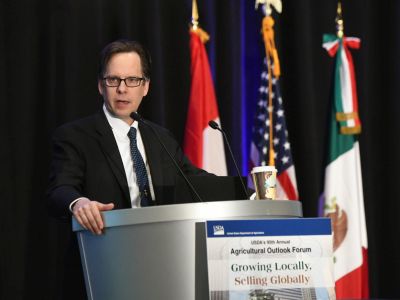 USDA’s former chief economist doesn’t think it’s a good idea to tinker with the crop insurance program in order to boost agricultural production in response to the war in Ukraine, as proposed by the Biden administration.

Contained in a $33 billion supplemental budget request released last week is $500 million in incentives, including a proposal to give a $10-per-acre crop insurance premium to farmers who plant winter wheat this fall and follow that with soybeans in the spring.

But “messing around with the crop insurance program is probably not a good idea,” Rob Johannson, the USDA’s chief economist from 2015 through 2020, told Agri-Pulse at the National Association of Farm Broadcasting’s Washington Watch. The program is “intended to provide risk management,” he said.

Instead, he suggested using the Commodity Credit Corp. to “help out with inputs that are needed to produce the commodities” noting that during the Trump administration, “we got pretty creative with the CCC charter act” when awarding funds for trade assistance and the Coronavirus Food Assistance Program. That approach also allows the department to avoid picking winners and losers among commodities.

Johansson is associate director of economics and policy analysis for the American Sugar Alliance,

With shipping costs soaring, two senators are proposing to suspend requirements that half of U.S. food aid be transported on U.S.-flagged carriers. The “cargo preference” requirement is part of the reason it will cost nearly $390 million to ship $282 million worth of ag commodities under a food aid plan the Biden administration announced last week.

The “measure will allow the United States to flow aid faster, and save taxpayer dollars and countless lives around the world,” Ernst said.

Union members have set up pickets at CNHi facilities in Racine, Wisconsin, and Burlington, Iowa. Chuck Browning, vice president and director of the union’s Agricultural Implement Department, says the group is “committed to bargaining until [its] members’ goals are achieved."

Keep in mind: Last year, about 10,000 UAW members at John Deere went on strike for over a month before reaching an agreement in November for a new six-year contract containing an immediate 10% raise.

Russian soldiers are breaking into grain elevators and stealing farmers' crops on land occupied by the invaders, according to Ukraine’s Ministry of Agrarian Policy and Food.

U.S. pet food exports to China are rising fast, and the expansion is expected to continue, according to a new report out of Beijing from USDA’s Foreign Agricultural Service.

China slashed its tariff on foreign-sourced pet food from 15% to just 4% in January of 2020, resulting in an increase in imports of nearly 100%, according to FAS. While Canada is still the primary foreign supplier to China, the U.S. is well positioned to expand shipments. China lifted its ban on U.S. pet food that contains ruminant material in 2020 and the Chinese government began quickly approving U.S. production facilities for export.

Beetle approved for use on invasive air potato

USDA’s Animal and Plant Health Inspection Service has approved release of a beetle that feeds on air potato, an invasive species “well established in Florida and probably throughout the Gulf States where it has the potential to severely disrupt entire ecosystems,” the agency said.

The Asian vine spreads rapidly and destroys native plants. “While eradication of air potato is no longer achievable at this stage of invasion in Florida, biological control reduces the use of chemical and mechanical control methods and the substantial accompanying labor costs,” the Florida Fish and Wildlife Conservation Commission said in comments on the draft environmental assessment.

APHIS received 14 comments on the draft, which all supported the release of the beetle. The final EA/Finding of No Significant Impact is available in the regulatory docket.

He said it: “There will soon be a wheat harvest in the south, but farmers in this situation may well say: ‘Here are the keys to the tractor - go collect yourself, if you want.’" - Ukrainian Agriculture Minister Mykola Solsky, responding to reports of Russian invaders stealing grain.