The war in Ukraine has laid bare the fact that agriculture is the key to national security. It’s a lesson world leaders are taking to heart as they scramble to lessen global reliance on key sources of food and fertilizer, but it’s unclear if it will be too late to stop the slide from food crises to famine in some of the poorest and least developed countries.

It’s not often that agriculture is the main topic for a United Nations Security Council meeting, but that was the case last week in New York. The council met May 18 to discuss fortifying global agricultural systems against the impacts of conflict. Secretary of State Antony Blinken convened a special Global Food Security Ministerial Meeting the next day where representatives from nearly three dozen countries gathered to issue a call to action: The world needs to produce more food and fertilizer to prevent the collapse of agricultural systems that are already straining under the weight of the pandemic, drought and war.

“Conflict remains the single greatest driver of hunger,” said United Nations Food and Agriculture Organization Director-General Qu Dongyu at the Security Council meeting. But he also stressed that “agriculture is one of the keys to lasting peace and security.”

Supply chains broke down after the COVID-19 outbreak, cutting off importers from suppliers, and then Russia invaded Ukraine, trapping millions of tons of wheat, corn and vegetable oil inside the country and driving up global prices. 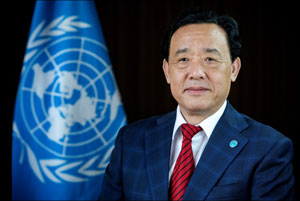 FAO Director-General Qu Dongyu“The increase in energy and fertilizer prices is putting the next global harvest at risk,” said Qu. “According to our latest scenarios, it could increase chronic undernourishment by an additional 18.8 million people by 2023 … Food production at the country-level must be expanded.”

Fertilizer is key and Russia – the largest fertilizer-producing country in the world – is using its ability to supply allies or withhold the input as a strategic tactic during the war, according to Blinken. The resulting scarcity, he stressed, is tantamount to using hunger as a weapon.

“Sanctions aren’t preventing Russia from exporting food and fertilizer,” Blinken said at the Security Council meeting. “The sanctions imposed by the United States and many other countries deliberately include carveouts for food, for fertilizer, and seeds from Russia, and we’re working with countries every day to ensure that they understand that sanctions do not prevent the flow of these items. No, the decision to weaponize food is Moscow’s and Moscow’s alone.”

That’s why on the following day, the U.S. and 30 other countries called on all UN members “to work together to mitigate the mid-term and long-term impacts of recent shocks to global agriculture and food systems. We must collectively mitigate fertilizer shortages and the subsequent threat to food production, increase investments in agricultural capacity and resilience, buffer those in vulnerable situations from impacts to their food security, nutrition and well-being, and sustain high-level global political engagement on these critical issues.”

But getting the world to produce more fertilizer is difficult, expensive and a lengthy process. The Biden administration has announced a $500 million grant program to spur investment in new American-made fertilizers and the G-7 nations are pledging to counter the rising cost and scarcity of fertilizer by funding an expansion of the FAO’s Agricultural Market Information System.

And industry is also getting involved.

Norwegian fertilizer giant Yara International recently donated and distributed 40,000 metric tons of fertilizer to Kenya, Uganda, Tanzania, Malawi, Rwanda, Zambia and Mozambique, but spokesman Brede Hertzenberg says the company is also working with farmers to make sure they aren’t using too much fertilizer in their operations in an effort to optimize usage and maintain high yields.

“A food-insecure world is also an unstable world,” said Hertzenberg. “Since January, 400 million people have become food insecure and we think that access to affordable fertilizer is a question of life and death.”

Yara, which recently snuck in 200 truckloads of fertilizer to Ukrainian farmers, has taken a firm stance that the “global food system needs to decrease its dependency on Russia,” the spokesman said.

While the world outside of Ukraine is working to fortify itself in the face of losing Ukrainian grain supplies and Russian fertilizer, the U.S., FAO and others are desperately trying to protect Ukraine’s farmers and provide Ukrainian citizens the means to grow their own food.

The FAO is now asking countries for $115.4 million to support nearly 1 million small and medium-sized farms in Ukraine. So far, the UN organization has gotten $11 million, which includes funding from the U.S. Agency for International Development’s Bureau for Humanitarian Assistance.

But USAID’s involvement to help Ukrainian farmers plant vegetables and raise livestock goes much further, a spokesperson tells Agri-Pulse. The agency has already delivered 20 tons of seed potatoes to 3,000 farmers in 13 provinces.

“USAID also puts a strong emphasis on access to financing,” the spokesperson said. “USAID has supported three online financial services platforms which are helping farmers apply for loans and quickly get approvals from banks. Since the start of Russia’s invasion, 65 small farmers have obtained loans totaling (the equivalent of $1.6 million USD) to help them continue farming.”

Beyond helping Ukraine, USAID and FAO are helping people grow wheat, produce milk and other food supplies in the Middle East and Africa, but the world’s attention is still predominantly fixated on deliveries of emergency food aid, says Qu.

“Despite the critical importance of agriculture to food availability … only 8% of total funding for the humanitarian food security sector goes to agriculture,” said the FAO Director-General. “We must protect people, agrifood systems and economies against future shocks.”