House appropriators are proposing big increases for the Environmental Protection Agency and Interior Department as part of a fiscal 2023 spending bill.

EPA would get $11.5 billion, a $2 billion, or 21% increase, in funding over the current fiscal year. Some $301 million in FY23 would be allocated for environmental justice work, an increase of $201 million in one year.

The Interior Department would get $16.6 billion in FY23, a 14% increase over the current fiscal. The Bureau of Land Management would get $1.5 billion, including $81 million for sage-grouse conservation. The Fish and Wildfire Service would get $1.9 billion.

Take note: Wildland fire management would be funded at $6.4 billion, which would be a 13% increase over FY22.

What’s next: The House Interior-Environment Appropriations Subcommittee will consider the bill this afternoon.

Twenty-two House Democrats and one Republican are asking the two highest-ranking members of the chamber to support a yearlong extension to school meal waivers, which are currently set to run out on June 30.

The legislators, led by Abigail Spanberger, D-Va., and Brian Fitzpatrick, R-Pa., sent a letter to House Speaker Nancy Pelosi and Minority Leader Kevin McCarthy on Monday asking them to support a bill extending USDA’s waiver authority to June 30 of next year.

Keep in mind: Child nutrition waivers were not reauthorized in the omnibus spending bill and so far, legislative efforts to expand them before the June 30 deadline have been unsuccessful.

Friend-of-the-court briefs from a broad cross-section of states, environmental organizations, conservative legal groups, members of Congress and agribusinesses have been filed in two Supreme Court cases being closely watched by the ag industry.

Probably the biggest filing of all is the federal government’s brief supporting the National Pork Producers Council and American Farm Bureau Federation in their challenge to the constitutionality of California’s animal housing law, Prop 12.
Solicitor General Elizabeth Prelogar said in the amicus brief that “California’s attempt to regulate out-of-state entities without a legitimate in-state justification does not become constitutional simply because the state has structured Proposition 12 as a ban on the in-state sale of pork from the offspring of sows confined in a non-compliant manner.”

Meanwhile, in a wetlands case before the court, William Reilly and Carol Browner, former administrators of the EPA, said two Idaho landowners whose wetlands enforcement case the court will hear Oct. 1, told the court that Michael and Chantell Sackett’s test for when wetlands should be regulated “ignores that Congress explicitly defined ‘navigable waters’ for purposes of the statute to mean all ‘waters of the United States,’ not only those with a continuous connection or that are traditionally navigable.” (See all briefs here.)

The wetlands case kicks off the court’s hearing schedule Oct. 3. The Prop 12 case will be heard Oct. 11.

Approximately 93% of rural bankers surveyed in a recent report believe there’s a better than even chance a future recession is coming.

And, according to The Creighton University Rural Mainstreet Index, over 42% of these bankers believe there’s a more than 75% risk for recession in the next 12 months.

A recession, according to Creighton University economist Ernie Goss, likely would have greater immediate impacts on urban areas, since farmers get some benefit from heightened agricultural commodity prices. But the impacts would still hit rural businesses, which could hurt farmers down the line.
"The businesses that the farmer deals with are where the problems would be,” Goss told Agri-Pulse. "But farmers are borrowing more and more and that puts farmers somewhat at risk, of course.” 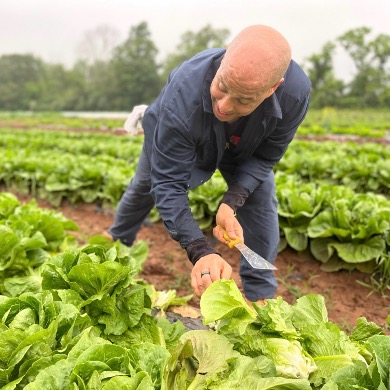 Booker, D-N.J., said he came away from the experience Friday “with a renewed appreciation of the incredible job that farmworkers do each day in the face of immense challenges and struggle.”

United Farm Workers President Teresa Romero said farmworkers “have done the skilled and often grueling work to keep our food supply stable crisis after crisis. The Senate needs to work just as hard for them.”

Sen. Alex Padilla, D-Calif., earlier joined UFW and the UFW Foundation in working in a California field. The senate visits are part of an effort to promote immigration reform.

ICYMI, check out our report on Booker’s ag policy priorities.

The eighth of 10 regional roundtables discussing “waters of the U.S.”,

The Environmental Protection Agency has been emphasizing that input from the forums will be used to inform implementation of WOTUS, but an EPA official said at the last roundtable, organized by the California Farm Bureau Federation, that EPA and the Army Corps of Engineers also would consider use the comments “in any subsequent rulemaking.”

Other groups represented at today’s roundtable include the New York City Department of Environmental Protection’s Bureau of Water Supply; the Houlton Band of Maliseet Indians; the Coalition for Wetlands and Forests, and Maine Beer Company.

The final two roundtables are June 23 and 24 and have been organized by the North Carolina Farm Bureau and county commissioners associations in Wyoming, Idaho and Montana.